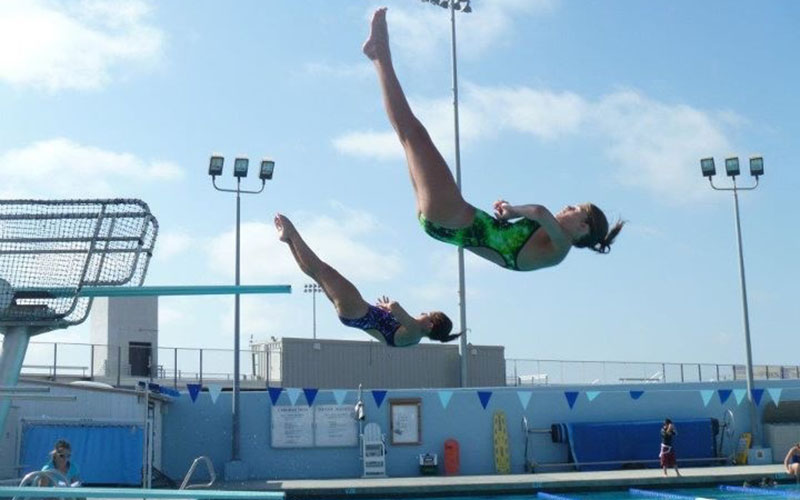 Two individuals practice their dives at the Monroe Street Pool in Carlsbad, Calif., for a club practice. Even elite divers know abiding by safety rules will minimize the chance for injury. (Photo by Nicole Walker/Cronkite News)

PHOENIX – One of the most high-profile diving accidents of all time still resonates with many. “There was this ‘wham’ and this big gasp from the crowd,” Arizona State diving coach Mark Bradshaw said. “The best diver in the world (just) hit the board.”

That diver was Greg Louganis and the nationally televised collision during the 1988 Summer Olympics left many with a deep concern about springboard diving.

Officials in the Valley’s diving community understand. They also are determined to keep their members safe.

“I think in any (sport) there’s some danger to it, but diving is still a relatively safe sport,” Bradshaw said.

The diving club program run out of ASU puts a special emphasis on mechanics. The City of Mesa requires all diving coaches to be trained on concussion protocol.

According to the American Institute for Research, 16.8 percent of diving-related accidents occur at a recreational pool when people attempt a dive they are not trained to do. Children often try to mimic tricks they see performed by professionals at the Olympics, or dives by athletes training with their competitive club team.

The diving community is relatively small compared to other sports and typically attracts only a few thousand athletes at the competitive level. Although at the professional level severe injuries still occur, most come at the amateur level.

In a 2015 Consumer Product Safety Commission report on sports equipment and estimated injuries among children ranging from ages 5-14, football had the highest among a sample of popular sports at around 204,000 injuries, followed by basketball and soccer.

According to the Knowles Law Firm, 6,500 children are brought into the hospital due to diving-related accidents and injuries every year.

Jena Steinberger, a former platform diver at the University of Hawaii at Manoa, suffered through multiple injuries that still linger 13 years later.

“My most serious were a torn ligament in my left hand which results in surgery to regain full use of my hands again,” Steinberger said. “I suffered from vertigo for one year due to several inner- and middle-ear infections from the pressure. To this day, I have horrible scar tissue in my ear, ruptured eardrum, and my hearing isn’t 100 percent. I’ve hit my head on the board, luckily no cracked skull.”

Diving-related injuries are the fourth-leading cause of spinal injuries in males, and the fifth-leading in females, according to the National Spinal Cord Injury Statistical Center.

Most diving accidents stem from kids playing around on the boards and not paying attention or attempting tricks they should not be performing.

However, experience is no guarantee against injury.

Bradshaw has been diving since he was 9 years old. He received a scholarship to Ohio State and eventually made his way onto the U.S. national team and then, ultimately, the Olympic team. Bradshaw was on the deck at the 1988 Summer Games when Louganis had his accident.

“My recollection was he’d been training on that particular dive and he was kind of a little bit close to the board,” said Bradshaw, who began coaching at ASU in 1997. “You don’t expect someone at that level to strike the board, let alone with their head, and (he is) probably the best diver ever.”

Louganis was the first diver to ever receive a perfect score in the Olympics. He is a four-time Olympic champion, has five World Championship titles and 47 national titles. He has more national titles than any diver in U.S. history and is the only male diver to win both the 3-meter springboard and 10-meter platform events in back-to-back Olympic games.

At the 1988 Olympics in Seoul, Louganis was on his ninth of 11 dives during the preliminary round. While attempting to perform a reverse 2 1/2 somersault pike, he hit his head on the 3-meter springboard and split open the back of his scalp, eventually needing five stitches.

It led to a concern among many that springboard diving is a dangerous sport.

USA Diver, the national governing body of diving, began researching and looking into various diving board related accidents after pools began removing their diving boards due to the “potential for injury.” They discovered that the diving well section of a recreational pool is the safest part of a swimming complex. Diving from diving boards was shown to be incredibly safe compared to other activities, they determined.

“You might experience some injury, but for the most part it’s pretty safe,” Bradshaw said.

The City of Mesa, however, is going to great lengths to ensure it remains a diving community.

“Our diving has (always) been a big part of our program,” Armfield said. “Our program is probably 60 years old. Diving has just been with us, so we have worked really hard to maintain as much safety as possible. It’s important to us and (we) want a decent program.” 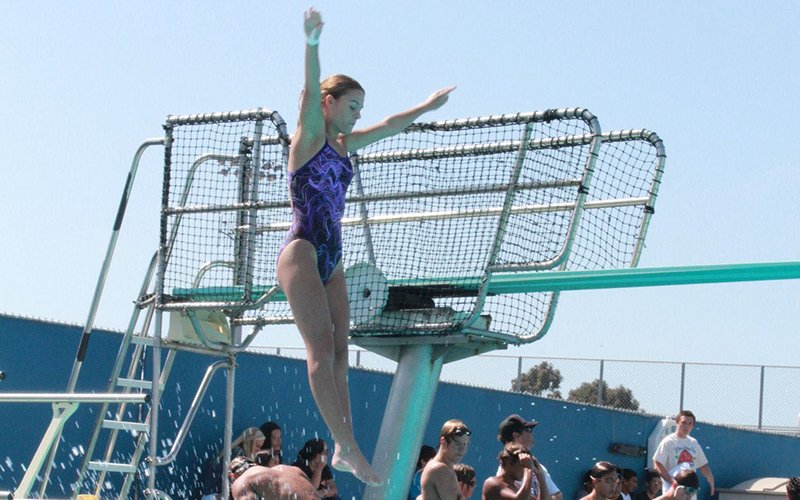 All levels of divers can benefit from safety education. (Photo by Nicole Walker/Cronkite News)

“It’s part of our history as well,” Foote said. “There’s a really strong history of diving. We’ve had multiple collegiate divers. We want to have (professional) diving facilities and we have that tradition, so we have some really strong dive programs.”

To ensure the safety of their divers, all nine Mesa swimming facilities have mandatory concussion trainings for coaches.

“They are trained to recognize the symptoms of what a concussion (is and how it) may appear to surface the next day,” Armfield said. “As a city, we work with A.T. Still (University School of Osteopathic Medicine in Arizona) and their grads come out and do trainings.”

Coaches have to make sure safety precautions are being met and that kids not be asked to perform at a level that exceeds their confidence and abilities.

Preparation is a key to avoiding accidents.

Steinberger said that without proper training, it’s hard for a diver to “know how to property and safely move so they don’t hit the diving board.”

For the kids who want to perform at those higher degree of difficulty dives, receiving the proper training is the best way to ensure their safety.

“Sign up for lessons at your local swimming pool with proper instructor,” Bradshaw said.

Sun Devil Divers, the club program at ASU’s Mona Plummer Aquatic Center, offers Future Champions, a class that requires no prior diving experience. If the diver wants to continue past the basic lesson program, Sun Devil Divers also offer a variety of different team levels that divers can work through based on their skill level.

“We want to teach them the proper way, the proper mechanics and how to do these things and if they really enjoy it and want go further, we move them up to our team levels,” Bradshaw said.

Mesa also has beginning and intermediate diving classes throughout their nine facilities that bring in roughly 3,000 participants every summer.

“In lessons we really work on progression,” Armfield said. “We start off with the most basic level of instruction and then as the confidence of the diver gets better, then we move on to the next level. So it’s hurdle, front dive, back dive, front somersault, back somersault.”

Following the right progression of training is key. So, too, is understanding that not every dive ends the way Greg Louganis’ did.