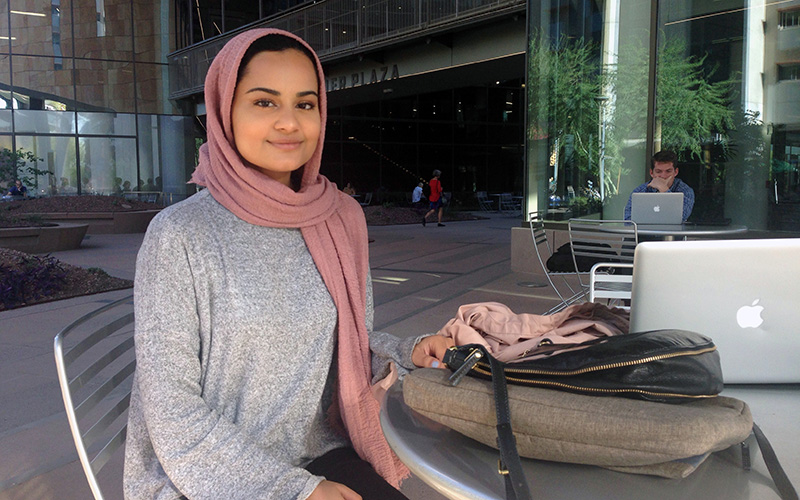 “It feels really awful when someone is just not aware of my culture,” said Aminah Shakoor, who lives in Chandler and is a senior at Arizona State University. “It’s so much more of a relief when a staff member says, ‘Oh, would you like a different room?’ ” (Photo by Saundra Wilson/Cronkite News) 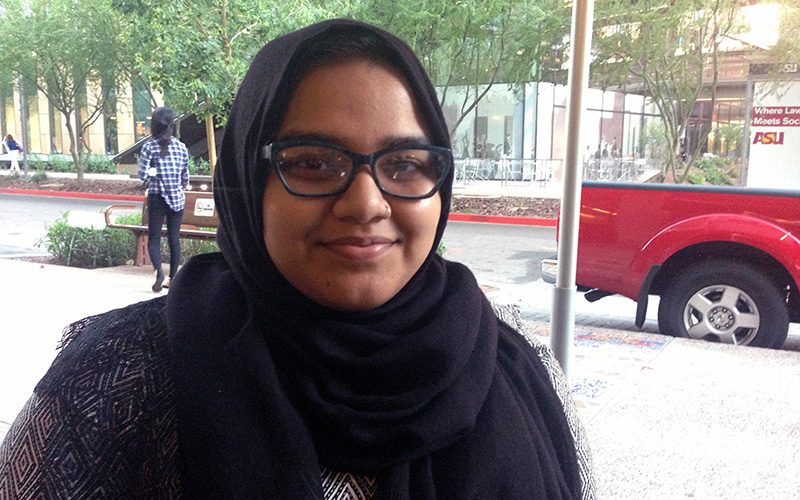 Tempe resident Wasiba Rahman said she feels relieved when she doesn’t have to explain why she needs privacy when getting her hair done at a salon. “At the end of the day we’re going to get the service done to relax and not be worried,” Rahman said. (Photo by Saundra Wilson/Cronkite News)

PHOENIX – Some Muslims who want to live out their faith in Arizona can have a difficult time finding certain businesses that cater to their needs.

Some Muslims choose to live according to two Islamic traditions: wearing a hijab, or head covering for women, and eating halal, referring to meat that is prepared according to Islamic law.

The practices can make eating out, grocery shopping, and getting beauty services more difficult for some Muslims.

“It is hard to find halal food, period,” said Aminah Shakoor, a 21-year-old Chandler resident who adheres to halal guidelines.

For Shakoor, eating out with friends means always having to order a vegetarian or fish entree because the meat is not halal.

For other Muslim women who wear hijabs, finding beauty salons that are familiar with Muslim culture and can provide extra privacy for them isn’t made simple by a Google search.

Most salons don’t market or advertise their privacy options for Muslim women wearing hijabs on their websites.

Wasiba Rahman and Lena Sarsour, who wear hijabs, grew up getting their hair done by family members or other Muslim women in their community.

Within the comfort of their own homes and communities, they could have hair care experiences free from the pressure and potential awkwardness of explaining their requests for extra privacy to salon staff unfamiliar with their faith.

Rahman, Sarsour and Shakoor said that Phoenix businesses can expand their businesses and customer base by offering Muslim-friendly services and products.

Some Phoenix businesses are doing just that.

Hijabs, halal and Muslim culture in the U.S.

A hijab, or head scarf, is a free flowing cloth that some Muslim women choose to wear over their hair.

Women who wear hijabs cover their hair in public and cannot allow men outside of their family to see their hair. Those who choose to wear it believe it is something God calls them to do in the Quran, the Islamic holy book, as an act of devotion and love, according to Rahman.

Halal, which means allowed, refers to food that is prepared according to Islamic law as defined in the Quran. The Arabic word means permissible or lawful, according to a halal food authority website.

For meat to be halal, the animal must be slaughtered in a ritual way known as Zabihah. Zabihah requires that the animal be alive prior to slaughter, that a Muslim must perform the slaughtering, and that all blood must be completely drained from the animal, according to the halal food authority website. Pork is forbidden.

Some American businesses have begun to embrace the Muslim consumer market, with major corporations taking steps to include religiously-inclusive products.

Nike, a global athletic apparel brand, announced in March that it would debut a Pro Hijab for Muslim female athletes that will be available early next year, according to the company’s website.

In 2015, about 3.3 million Muslims were living in the United States, only comprising about one percent of the U.S. population, according to estimates from the Pew Research Center. But those numbers are growing.

Muslims are expected to become the second-largest religious group in the country in a little more than three decades, behind Christianity but just ahead of people who identify as Jewish, Pew says.

That’s a powerful economic incentive for business owners. American Muslims represent a $98 billion consumer market, according to research by DinarStandard, a marketing strategy group that specializes in the Muslim market.

Though the population size is difficult to pinpoint because the U.S. Census Bureau does not collect data on religion, an estimated 50,000 to 60,000 Muslims live in Arizona, according to Cronkite News.

How some Muslim women work with salons

Shakoor said she loves the Phoenix area but has struggled to find places to get her hair done as a Muslim woman who wears a hijab. 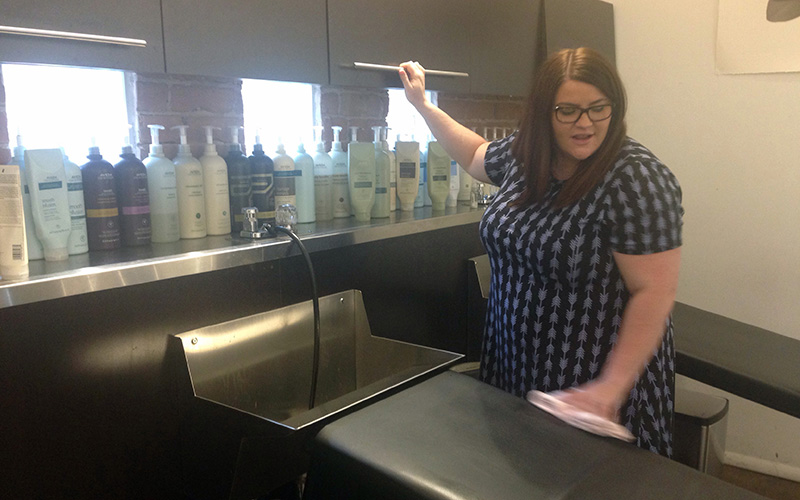 Audrey Berge, the JUUT Salonspa manager, said hair sylists make sure to cover the hair of Muslim women with a towel when they move to and from a hair washing station. (Photo by Saundra Wilson/Cronkite News)

She said all of her salon experiences have been positive, but said her mother had a negative experience at a Phoenix salon.

“They were just being nasty to her and not being accommodating,” Shakoor said. “They didn’t offer any other room even though they had another room.”

Muslim women who wear hijabs often request privacy screens or a private room to get their hair done.

Having male stylists nearby, large windows or people coming in and out of the studio regularly can be a stressful experience.

“At the end of the day we’re going to get the service done to relax and not be worried,” Rahman said.

Rahman said her aunt gets her hair done exclusively at a women-only salon in Chandler because “she doesn’t have to constantly worry about a man walking by and seeing her hair.”

Shakoor and Rahman are loyal customers to the salons they’ve had positive experiences at because of more than the service: just finding out about Muslim-friendly salons can be challenging.

A Google search for “hijab-friendly salons in Phoenix” brings up news articles about women’s-only salons across the nation, but doesn’t produce a directory or list of area-specific salons.

“Right now that sort of travels word of mouth,” said Imraan Siddiqi, executive director for the Council on American Islamic Relations Arizona, a civil rights and advocacy group for Arizona Muslims. “There’s not that sort of open advertisement of places that exist out there.”

Shakoor said she often feels uncomfortable asking about privacy options in salon spaces that aren’t familiar with her culture or religion.

“Usually I feel that I’m imposing, so I don’t want to bother anyone,” she said.

While the hijab may bring discomfort in salon settings, for many Muslim women, it is a source of pride and identity.

Sarsour elected to wear the hijab at nine years old, but said she didn’t really embrace it until she was 14.

“I didn’t really feel beautiful in my hijab,” she said. “I wanted to look like the other girls.”

Sarsour said she prefers getting her hair cut by people who aren’t Muslim because her hijab sparks meaningful conversations.

“They start asking about it and ask why I wear it,” she said. “We get to know each other on a deeper, personal level.”

Sarsour said salons she’s gone to have accommodated her by putting her in a private room and locking the door.

She believes salons can be more inclusive by offering partitions to women desiring extra privacy, staying an hour after closing to create a time for women the business is not full of customers or passersby, being willing to close the blinds, or having a private room.

“If a lot of salons offered that, they would certainly have a lot more diverse customers.” She said. “If you invite one hijabi girl, you bring in another ten.”

Most salons are discovered by word of mouth, including Juut Salonspa, a Tempe salon near Mill Avenue and University Drive that provides privacy screens for customers.

“I feel like in downtown Tempe, especially with ASU, we have such a different diversity of clients and the different clients that come in, we’ve always catered to them,” said Audrey Benge, the salon manager.

The salon also arranges employee schedules to make sure no male stylists are scheduled around the time of the appointment. If they are scheduled, the managers make sure the men are on another floor of the three-story salon.

“Everybody wants to feel beautiful and wants their day made,” said Rose Baronovic, the salon assistant manager. “It’s just important to us to be able to do that for everyone.”

The two managers said their decision to offer the privacy screens comes down to customer service.

Rahman said such salons – she and others estimate there at least six in the Valley – show they respect her values.

“It’s such a relief not having to constantly explain myself,” said Rahman. “At the end of the day, I’m paying 50 dollars for an experience and a service, so that 50 dollars is not only for the haircut but for how they treat me.”

The hunger to find halal in Phoenix

Eating halal in Phoenix can be a struggle for some Muslims, especially when eating out.

Shakoor said it’s difficult to find restaurants that use halal meat and she doesn’t bother asking if the food is halal unless she is at an expensive restaurant.

“It would be nice to see more companies offer that selection,” she said.

Arizona has more than 100 more halal restaurants and markets than neighboring Utah, Nevada and New Mexico. Colorado comes close to Arizona’s numbers with 207 locations. But each of them have far less than California’s more than 2,000 locations.

Siddiqui said the search for halal meat can affect where Muslim families go to celebrate and eat out.

“I think if there was stigma removed from halal meat and this whole idea of it being attached to some weird Muslim law, businesses would be more open to selling halal food,” Shakoor said.

“There has always been a hesitancy when it comes to anything surrounding Muslims,” Shakoor said. She said the association of halal meat with Islam as a religion may make people uncomfortable.

“I think (non-Muslim) people focus on the religion more than I myself as a person focus on it,” she said.

The availability of halal meat also comes into play in grocery shopping, where meat selections are often not halal.

The market has its own slaughterhouse and draws customers from all backgrounds, according to store manager Sarah Soueidan.

“We get a lot of customers who come here who are not Muslim and they buy halal just for the health benefits,” she said.

Soueidan said that though the store offers halal foods, they do not cater to just one community.

“We don’t want people to think that we’re a Middle Eastern store just for Muslims,” she said. “No, we’re for everyone.”

The market has two locations, one in Mesa and one in Phoenix, with plans to open two more stores in the coming year in Scottsdale and Glendale, Soueidan said.

“I believe Middle Easterners and immigrants are increasing and the need to have halal is increasing,” she said.

“I think as we progress, we see that the consumer habits of Muslims are exactly those of all other Americans,” Siddiqi said.