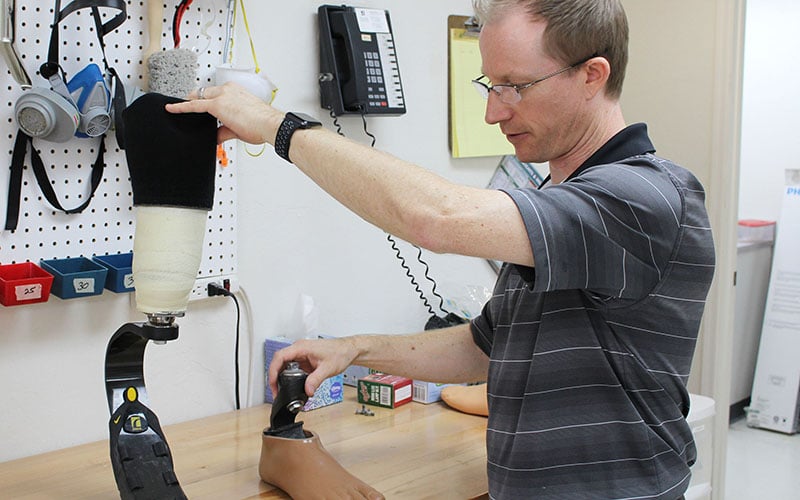 The pair went outside.

“I spent three weeks afterwards, numerous surgeries, when they decided that they were going to amputate my leg,” he said. “Then from there on, it’s just I got my first leg and never really stopped going.”

Now 27, Pryor is an accomplished athlete benefiting from the advancements in prosthetics. He plays on an all-amputee basketball team and is training for the the javelin competition in the World Para Athletics Championships this summer.

The world of prosthetics has made great advances in recent years. A field that once relied heavily on wood has since evolved to use stronger, lightweight materials like carbon fiber. For athletes, prosthetics are available for specific sports, including basketball, cycling and running.

Pryor used a wheelchair before turning to a walker. He started wearing his prosthetic leg about eight months after the shotgun accident.

“I was already in T-ball when my accident happened,” he said. “I like to say the only sport I actually played with two legs was T-ball for a half a year, so everything else has been with a prosthetic.”

He started to play baseball again when he was 6, although basketball and football were his focus.

Doctors told him that he would need to relearn how to walk and would be limited to certain movements.

“They told me I wouldn’t be able to do a lot of things, but when they gave me my first prosthesis, I just took off walking and never really had a problem,” he said.

Growing up, Pryor benefited from the care given by the Shriners Hospitals for Children. 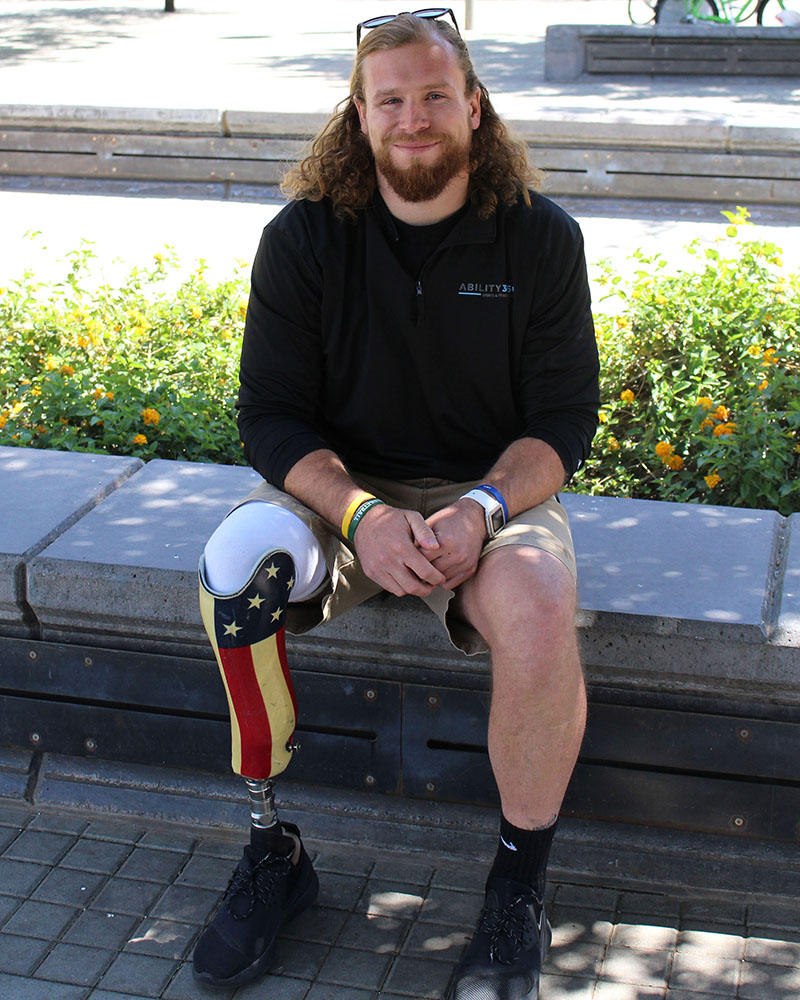 “They kind of help pay for those prosthetics and those needs if you don’t have them,” he said. “I was a Shriner kid from the time I was 6 years old until the time I quit growing when I was 23.

“It’s helped me a lot. It gave me all of the equipment I needed to be able to compete and even just live an active life.”

Over the years, prosthetics have continued to evolve. More options are available for daily and athletic activities, and improvements have centered on technology and durability.

Owen Larson, a certified prosthetist at the Artificial Limb Specialists in Mesa, has seen the changes firsthand during his 46 years in the field. The business has gone high-tech.

“That’s probably one of the most amazing things that have come about is the microprocessors, because when I started years ago, we only had a few feet to choose from,” he said. “Now, there’s probably over a thousand feet to choose from. The materials when I first started, it was wood. Now everything is carbon fiber, all different types of plastic, which make it much lighter, much stronger.”

Pryor said as a child it was “literally a rubber foot and a plastic leg” and they would break all the time. During the football season of his senior year, he broke 12 prosthetic feet.

When today’s prosthetics break, Larson said, the warnings are rare.

“You have a certain stress level, especially with the carbon fibers,” he said. “When they break, it’s more of a catastrophic break. You don’t get any warnings, whereas years ago you would start to hear some clicking or some type of noise and that would give you kind of a heads-up, but nowadays it just fractures right away.”

Triathlete and certified prosthetist Seth O’Brien said prosthetic components will break down as time goes on, but not all consider it a negative.

“If you can break it, it’s like a badge that you wear (like), ‘Look what I broke,’ ” O’Brien said. “I get a lot of my athletes and just really active guys that are coming in all the time proud that they broke something that should be indestructible.”

O’Brien, 34, said many insurance policies don’t cover prosthetics for sports, so payment typically comes out of pocket or from a sponsor’s account.

“I still don’t understand why you wouldn’t cover it as medically necessary when you’re trying to get people to be more fit and (healthy) anyway, but (when they’re) not covered by insurance, they can get pretty pricey,” O’Brien said. “It’s always a cool thing when you break it because it means you’re really putting it to the test, but then it’s a, ‘Oh no, now I got to replace it.’ ”

Pryor has benefited from changes in the field.

“The durability of them has changed, just the technology and how they fit and how they find the center of gravity to your body is a lot different,” Pryor said. “Before you could always kind of tell there was a hitch when I ran and stuff like that. Now it’s like you can’t even tell.”

Pryor said the rare hindrance from participating in sports was that he would always get sores, but now he doesn’t have that problem.

“I don’t get a lot of that, but I’ll just carry my wrenches with me when I go to track practice and change out my foot and put it back on when I’m done. It’s pretty nice to have that.”

Athletic use vs. everyday use

Sports prosthetics are different than everyday-use prosthetics because they are designed for a specific sport.

Nearly 10 years ago, O’Brien lost his leg to cancer and had a difficult time. It inspired him to become a certified prosthetist. He works at Artificial Limb Specialists and has been in the field for six years.

He said prosthetics for everyday-use are designed “to make you as normal, functional as if it had never happened, as possible.”

Athletic prosthetics are created with the sport in mind.

“Each sport prosthesis is made specifically for that sport and usually it has to do with the stability or how much impact force it can take. The dynamics of walking, you get about one to one-and-a-half times your bodyweight going through your leg, but when you go to a run, it can be up to two or three times your bodyweight, so a very different demand on the carbon fiber.”

For the last three or four years, O’Brien has competed in triathlons and has had a specific prosthetic for each portion of the competition.

“It’s a complicated sport because going from swimming, where you don’t wear anything on your limb, to then having to get out (and use) crutches or hop or something into the transition area, and I put on a totally separate leg for my bike,” O’Brien said.

“I have a cycling leg that I switch into. (I) go do the bike race and then come back and then I switch again to a specific running leg. So I go through three different legs throughout the process and the transition is always the trickiest part.”

Pryor continues to participate in various sports, including basketball and javelin.

He said he uses a blade – a curved device that attaches below the knee – for track and field but not for basketball.

“For me, it’s more of the turning stuff on the blade where you don’t have that stability as much, but I can’t play basketball in that blade,” Pryor said. “You can’t cut. You can’t turn. For running, it does make a big difference.

“It gives you a springback. It’s easier on your hips and on your body, so that’s the biggest difference that I see.”

“It does take a little bit of getting used to, but for me it was kind of put it on and play with it for a little bit, run on it and now it’s just normal for me to use it,” he said.

As Pryor trains for the World Para Athletics Championships in London in July, he will continue working to let others know that more is available to them.

In addition to competing in sports, he is a graduate student at Arizona State.

“With my research and studying, (the priority is to) just keep the doors open and let people ask questions (and to) really work on this inclusive environment that we want to live in because we don’t want to let anybody sit on the sidelines or leave anybody out. And for me, I didn’t have that, but I’ve seen that.

“I don’t want anybody to go through that,” Pryor said. “I want them to know that there is these things out there for them.”