Downtown Phoenix struggles with affordable housing in midst of development 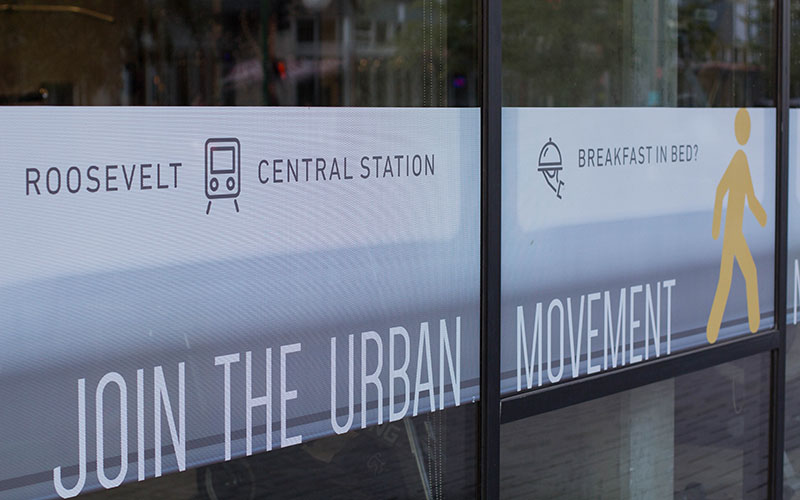 “‘No’ is a hard thing to say to people who need help,” Joe Keeper said.

As Director of Real Estate Development at Native American Connections, Keeper advocates for affordable housing in Phoenix, and he said he is constantly turning people away who don’t fit the requirements but need assistance affording rent in Phoenix.

Development in Phoenix is rising, and it is causing even more obstacles for affordable housing advocates like Keeper.

There are only 18 affordable units available per 100 renter households in Metro Phoenix, according to the National Low Income Housing Coalition. Only four cities in the U.S. have fewer affordable units.

Keeper says there are more than 2,000 households on a waiting list for units developed by Native American Connections.

Keeper recently finished a project called Cedar Crossing at Third and Virginia streets, and he was able to fill all 74 units within 60 days.

“We probably turned away two to three households per unit because of how strict our requirements are,” Keeper said. “We do everything we can and exhaust all resources to help these people because ‘no’ is hard to say.”

Native American Connections has four affordable housing projects in Downtown Phoenix but is struggling to secure more. Keeper said ten years ago he would have been able to buy vacant lots with little competition, but now he has to bid against developers who can afford to spend more for the land.

“When we are competing against market-rate guys; that’s where the challenge is,” Keeper said.

The ‘good problems’ that come with success

Keeper’s problems in expanding affordable housing downtown are partly due to increased demand for urban living in the area. Since development started to take off, Downtown Phoenix has struggled with balancing expansion and preservation, the kind of problem that is “good” to have.

“The biggest question will be ‘Can we push for higher density without hiking up prices?’” Dan Klocke, head of development for Downtown Phoenix, said. “Right now we are not building a single affordable housing complex, and the hardest thing is to build anything in that $800 to $1,000 price range that most people need.”

The demand for residential units creates an interest from developers.

“There is a new demand for urban housing,” Klocke said. “That demand comes from younger people who want to live in an urban setting. And developers are saying ‘If there’s demand, we want to build.’”

Projects are popping up all over from high-rise complexes like Derby Roosevelt Row that just broke ground at Second and McKinley streets in March, to the newly completed ILuminate Apartments on Third and Roosevelt streets.

The problem is that developers are creating high-end units that many people cannot afford. Rent in Phoenix has been on the rise with a 4.7 percent increase from December 2015 to December 2016, according to the Zillow Rent Index.

Downtown residents like Doug Newton, 68, said that increases in downtown rent prices are unsustainable in the long term.

“The counterpoint is that the value of living downtown has also gone up substantially,” Newton wrote in a Public Insight Network query. “There are many exciting new restaurants, great entertainment, extensive public transportation, more cultural events and broadening employment opportunities. So the positive vibe of living downtown will continue to increase.”

The demand for residential living in downtown is primarily from a younger crowd, Klocke said, specifically the 20-26 age group, many of whom cannot afford to live in the $1,300 high-rise units being built.

Arizona State University junior Austin Miller, 20, moved downtown last year to be closer to the student-centered community, but he said he’d wishes he was paying closer to $700 rather than the $1,000 he’s paying now.

“I think it’s asking a lot of people who are trying to build a community,” Miller said. “It’s like they [developers] are saying, ‘We want people to live here, but we are going to raise the prices and make it impossible for people to live here.’ So that’s frustrating.”

Klocke explains that there are three price ranges for units in the area: market-competitive, mid-range and affordable housing.

Currently, there are no plans for new affordable housing units and very few mid-range apartments in that $800-$1,000 price range, which many fear will hinder the diverse downtown community from continued residence in the area.

Balancing the future of expansion, preservation

The demand for residential living in downtown is partly due to the culture, Klocke said. This undefinable uniqueness of “special people places,” as he calls them, make urban living so much more interesting for younger populations.

For future developments, Klocke is concerned with safeguarding the types of places that make Downtown Phoenix desirable for a younger crowd. The future battle will be preserving these “special places” in the midst of development. 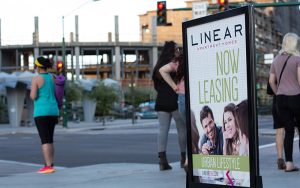 Linear Apartment Complex advertises on the corner of Roosevelt and Third streets near other residential construction sites. (Photo by Tynin Fries/Cronkite News)

“We need to create density, as much as possible,” Klocke said. “But we need to make sure we preserve those special people places. Places like Roosevelt Row but also individual building like Phoenix Public Market; those kind of places that you aren’t going to find anywhere else.”

In order for Downtown Phoenix to preserve the essence of the community in the midst of expansion, Klocke says the city needs to carefully intervene in development, whether that includes conversations about creative building around community landmarks or creating partial affordable housing.

After receiving pressure from the community over high market rates, despite an $8 million tax credit, the developers of the Derby Roosevelt Row high-rise housing project are setting aside five percent of the units to be priced as mid-range and capped at $840, which is under the $1,300 market-competitive rate.

The agreement with the developer, AMSTAR, is the kind of thing Klocke hopes to see more of in the future.

“It’s not a ton of units, but it’s something,” Klocke said. “We’re always actively looking for affordable housing solutions, but it’s really hard.”

The effort to make downtown both accessible and affordable is a common problem that many up-and-coming downtowns have, Klocke said.

“We are pushing to try to get more affordable housing projects built so we can have people of all income levels, all backgrounds down here,” Klocke said. “That’s what makes [downtown] interesting, fun, exciting.”