By Joshua Delauder/Cronkite News | Wednesday, May 4, 2016 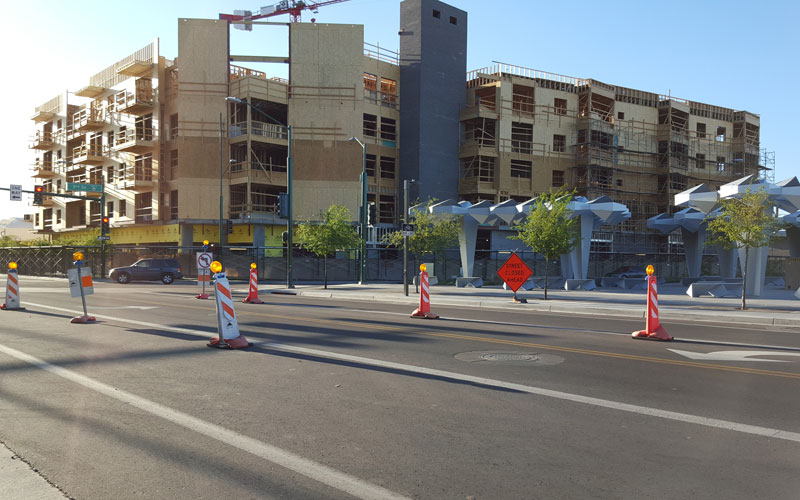 Due to the population boom in Downtown Phoenix, you will see many of these active apartment construction sites around Phoenix.(Photo by Joshua Delauder/Cronkite News)

PHOENIX – Several new apartments are being built in and around Downtown Phoenix. Many of these apartments include amenities built exclusively for students and most of them are located within walking distance of the downtown Arizona State University campus.

These will be available to rent just around the time the new law school will be opening which could prove useful to students, many of whom will be moving downtown.

There are currently 628 students enrolled for the 2017 school year in the Sandra Day O’Connor Law School, according to U.S. News and World Report. Law School Admission Council puts the average attendance around 600 to 700. Many of these students could be looking for someplace to stay in Fall 2016.

At least four of these new apartments are being built in and around Downtown Phoenix include: Illuminate, Linear, Proxy 333 and Capital Place Apartments.

Nate Smith, a freshman and sports journalism major at ASU’s Walter Cronkite School of Journalism, said he likes having all these options for apartments.

“The more options you have the more secure and confident you’d be with your decision after you’ve observed all your options,” he said.

A few new condominiums are also being built. Portland on the Park, Edison Midtown and enHance Park are finding buyers. But these are most likely out of the range of most college students or recent graduates as the Portland website prices the least expensive one at $235,000. This price is to buy, not rent.

Apartments have been getting built faster than actual resident houses are going up, according to Ken Clark, a realtor for Home Smart Elite Group and a member of the Arizona House of Representatives.

The construction of these apartments is most likely not going to slow down, as according to Zillow, there are approximately 350 listings for vacant lots. All of these are potential places for apartments in Phoenix.

Many of these apartments are getting built right across the street from each other but Clark said this is not violating any kind of zoning laws.

“That’s intended and that’s not necessarily a problem,” he said.

Clark said one problem with building so many apartments in one general vicinity can push out other businesses.

“My concerns about some of the developments going in downtown is that it could crowd out locally owned businesses which have been the driving force for downtown redevelopment and you could end up just having franchises,” he said.

Smith said the closeness of the apartments is not really a big issue for him.

“It just promotes some healthy competition in my opinion,” he said.

Dan Carroll, a realtor with Realty One Group, said many of the contractors do a lot of research into where they want to build.

One issue is when so many apartments going up, property taxes could go up, but it depends on the type of property, Clark said.

“If you’re talking about an apartment building that’s next to 10 little houses that have been there for 70 years, their property taxes could go up, but they’re not supposed to because the assessor assessing their value based on similar homes like them,” he said. “Their property taxes might not go up, unless they’re turned into businesses.”

The cost of a current one room apartment at the nearby student apartment, Roosevelt Point, is $990 to $1,030. This can be expensive to students on a strict budget.

Many of the student apartments can choose to charge the higher prices because of how close they are to Downtown Phoenix, Carroll said.

“Proximity is desirable and if something is more desirable, there is more demand for it and they can charge more,” he said.

Smith said many of his friends are going with the multi-room apartments since many single apartments are expensive.

“A lot of studio rooms go for either a thousand or above,” he said. “I think multi-room apartments are cost efficient.”

Smith said he would rather live in an expensive student apartment than a cheaper regular apartment because of the age groups.

“If it’s not an insane difference in expenses, I would much rather live around people my age because I just think that would be more fun for everyone,” he said.

Correction: An earlier version of this story incorrectly listed Edison Midtown as an apartment complex. It is a condominium development.