Chris Berghaus, veteran, committed suicide in 2011 after he returned from Iraq. His mother, Sue, sets aside a place for him at a restaurant every May to celebrate his birthday. (Photo by Jessica Clark/Cronkite News)

The son, a veteran, committed suicide in 2011, which prompted Berghaus to become an advocate for suicide prevention.

Berghaus is among the Valley speakers at the 50th annual conference of the American Association of Suicidology. The Phoenix conference this week will house the first Innovation Summit, bringing with it nearly 1,500 mental-health experts, survivors and family members to discuss the future of suicide prevention.

With nearly 1,300 residents dying by suicide in 2015, Arizona has the 13th most suicides in the country, according to the Centers for Disease Control.

The mountain region, comprised of eight states including Arizona, has the highest regional suicide rate in the U.S.

An article from the Robert Wood Johnson Foundation refers to the mountain region as the “Suicide Belt.”

Mental-health organizations have pledged to lower the suicide rate. While people such as Berghaus are taking steps to help their communities, some organizations are approaching solutions on a larger scale. The Suicide Prevention Resource Center, for example, aims to lower the national suicide rate by 20 percent by 2025.

David Covington, the chief executive and president of mental health group RI International, said achieving this goal will come from changing the focus on suicide from people who died to people who were able to overcome difficulties and lived.

“Some of the most innovative things we’re seeing right now are around the area of lived experience,” Covington said. “People who are now talking about their own suicide attempts. The dialogue in the U.S. is primarily around people who died. So the millions who are struggling with desperate pain are not seeing the stories of people who found a way to survive.”

Covington said that health care advocates are sharing their stories more often, inspiring others to share their stories with the rest of the community.

“Now we’re seeing hundreds who are coming out and talking about their own experience of how they struggle, and some have found a way to thrive,” he said. “It’s a full gamut of human experience.”

Covington, who was recently elected the president of the American Association of Suicidology, said it’s critical to abolish the shame surrounding mental health care to make any lasting change.

“There’s still a very significant amount of discrimination that occurs around ‘coming out,’ ” Covington said. “There could be consequences on an individual who ends up suddenly being away from work. Individuals sometimes lose a job or housing because of a psychiatric in-patient stay. ”

Mental health experts also stress that suicide not only takes victims’ lives, but changes the lives of the people around them.

Sue Berghaus said her life hasn’t been the same. She still grieves. 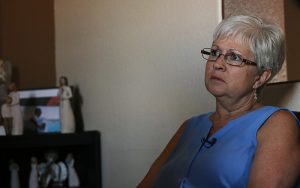 Sue Berghaus, whose son, Chris Berghaus, committed suicide in 2011, said the way his life ended should not define how he is remembered. Berghaus is now an advocate for suicide prevention. (Photo by Jessica Clark/Cronkite News)

“That process is very slow, and it’s different for everybody,” she said. “But for me, it’s just trying to rebuild your life again, because the life that you knew prior to this, the person you were prior to this, they don’t exist anymore. In our society, we bury our grandparents and parents, but you’re never prepared to bury your child.”

Six years after her son’s death, Berghaus said she still doubts herself as a mother.

“It makes you feel like you’re a failure, a really bad mom,” she said. “It makes you have all these self doubts. Even to this day, if you were to say you’re raising your kids and wanted to ask me for parental advice, I’m going to tell you I’m not the person to answer those questions.”

Since her son’s death, Berghaus has become an advocate for families affected by suicide. She walks in the 22 for the 22 Hike, a 22-kilometer hike to raise awareness of the 22 military suicides that occur every day in the U.S. It raises money for Rallypoint Arizona a veteran suicide awareness group.

Even mental health experts may need a support group. Michael Weinburg, senior manager of behavioral health services at the Banner Thunderbird Medical Center, is conducting a workshop during this week’s conference focused on compassion fatigue for people working with suicidal patients.

“In working in our field for any length of time and giving your best and your most to your patients and clients, you come to a point where they get burned out, where you see your patient differently than they really are,” Weinburg said. “And it becomes about trying to control for the outcome, and we can’t control for that. What we can control is for the process, how we do our work. When you put too much energy on the outcome, your emotional state as a provider is connected to what happens to your patient.”

Berghaus said healthy discussion is the key to destigmatizing suicide and perhaps preventing it.

“The elephant in the room needs to go away, and that’s what people need to understand,” Berghaus said. “People want to hear about their person. You describe your loved one as a book. They had a beginning, all the center stuff, and you can’t let their death by suicide be the defining chapter of their lives.”

Mental health resources
What to watch for:

Where to find help: