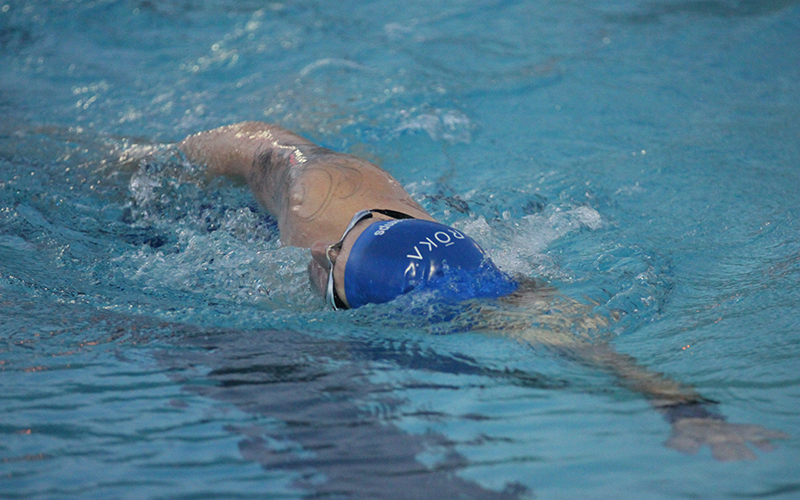 Young adults — especially those ages 18 to 25 — are at a higher risk for depression than people in any other age group. In fact, suicide is the second leading cause of death for people ages 15 to 34, according to the Centers for Disease Control and Prevention. In this episode of In Focus, we explore why mental illness is especially common in young adults and why exercise – in addition to counseling and medication therapy – may help address or even prevent the onset of depression. We hear the story of one student who found relief from depression through triathlon training and talk with experts about the effects of physical exertion on the brain.

Mental health resources
What to watch for:

Where to find help:

Ryan Eckert, 23, grew up playing sports, had healthy relationships with friends and family, and did well in high school.

But during his freshman year in college, Eckert stopped playing baseball to focus on school. Soon, he and his girlfriend noticed he was sad more often than he used to be.

“It was as if I was walking around and there was this really dark, black, storm cloud, that was surrounding me,” Ryan said. “Like at all hours of the day. So, no matter how good anything felt, it just didn’t really feel good.”

In 2013, Ryan was diagnosed with depression and anxiety. He began seeing a counselor and taking antidepressant medication, but his depression continued.

“My suicidal thoughts began getting way worse,” he said. “Like, it was on a daily basis. It just consumed my thoughts.”

Ryan’s experience is not unusual among young adults. In 2015, suicide was the second leading cause of death for people ages 15-34, according to the Centers for Disease Control and Prevention.

Ryan eventually called a suicide helpline, and he worked with a therapist and took antidepressant medication. But it wasn’t until he started training for triathlons that he found real relief.

It happened basically by accident. To get to school at the time he relied on his car, which broke down. It was too expensive to fix it, so he bought a bike to ride the seven miles to Arizona State University’s downtown campus. For the first few months it was a pain, but he started to enjoy it. He already ran a little in his free time and decided to combine the two and compete in a duathlon, a run-bike-run race. He eventually added swimming to the mix and started training for triathlons.

He first participated in the Ironman 70.3 Arizona in 2015 and followed it with an olympic distance, which is “a step above.” Ryan’s love for the sport grew. He found a new passion, one he can set goals for while continuing to challenge himself mentally and physically.

“I think it’s just achieving a goal that you didn’t think you could achieve or that you thought was so far out there that there is no way you could ever do it,” Ryan says, ” is just like the greatest gift you could ever give yourself.”

Kristin Hoffner, a senior lecturer at Arizona State University in the kinesiology program at the School of Health Nutrition and Promotion, has a background in research into the relationship between mental health and physical activity.

“You can take it from two standpoints, there a psychological mechanisms that allow it to help. Things like setting goals, accomplishing things, being in a good social circle. If you work out with others and with friends,” she explains. “It also targets a lot of physiological mechanisms. So, when we exercise our levels of serotonin in the brain change.”

As Ryan trains for upcoming events it keeps him focused on the good things to come.

“I’m definitely doing 100 times better than I was at the worst of my depression,” he said. “I’m not on any medication. I still see a counselor maybe once a month, once every six weeks just to check in. But ever since I got out of the hospital, and ever since I really got into the sport of triathlon, it’s just been all positives from there.”

Ryan says he wants other people struggling with depression to know things will improve.

“There’s always something out there better than what you’re feeling right now,” he said. “That is definitely one of the biggest lessons that I’ve learned, is that everything is temporary. Things are changing. And there’s things that you can do to make whatever you’re feeling right now better, and to go away over time. So if you’re feeling really depressed and you’re having thoughts of harming yourself, it can and it will get better just as long as you recognise that and you’re willing to take the necessary steps to make it better.”