The Morrison-Cronkite News poll found that one in seven adults in Arizona knows a victim of a fatal prescription opioid overdose. (Photo by Johanna Huckeba/Cronkite News)

PHOENIX — More than four in ten adults in Arizona know someone who has been addicted to prescription painkillers, according to a new Morrison-Cronkite News poll.

The poll shows that 44.8 percent of adults in Arizona personally know someone who has taken a prescription opioid not prescribed to them and 41.8 percent know someone who has been addicted to prescription painkillers. The Morrison Institute surveyed 800 randomly selected adults in the state, choosing a sample representative of the state’s population and demographics. The interviews were conducted March 11-18 and were conducted in English or Spanish. The poll has a margin of error of plus or minus 3.5 percentage points.

It also found that 58.2 percent of those surveyed said that it was very easy or somewhat easy to access prescription opioids.

The poll’s results are not a surprise to Kim Humphrey, who chairs the board at Parents of Addicted Loved Ones, a support group for parents, and has two sons who struggled with opiate addiction.

“I have found that you pretty much can’t have a conversation with somebody that doesn’t know somebody that has this problem,” he said. 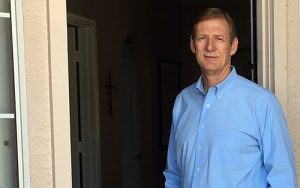 Kim Humphrey chairs the board at Parents of Addicted Loved Ones, a support group for parents, and has two sons who struggled with opiate addiction. (Photo by Lily Altavena/Cronkite News)

Humphrey thought his sons would be the least likely to try drugs: they were both high-achieving kids raised by religious parents who went to seminars on child-rearing. It was not until a parent of one of his oldest son’s classmates called to tell Humphrey that his son was on the verge of overdosing that he realized there was a problem at all.

“We go from, we don’t realize this is a problem to we think he’s going to die,” he said.

Humphrey and his wife were caught off guard once again when their younger son suddenly dropped out of college because of a burgeoning drug addiction.

“It’s hard not to know somebody that’s involved in this situation,” he said.

Yet, perceptions about prescription drug use may be changing: 54.2 percent who responded to the Morrison-Cronkite News poll said they think the risk levels of heroin use and prescription painkiller use are about equal.

“People, I think they’re very unaware of these kinds of problems,” Debbie Moak, the director of the Governor’s Office of Youth, Faith and Family, said. “They truly don’t know better.”

Younger adults were more likely to believe that prescription painkiller abuse makes someone more likely to try heroin or other illegal drugs – 70.5 percent of people ages 18 to 35 answering “more likely” versus 54.3 percent of those between 36 and 64.

Chronic pain is also an issue for many Arizonans. Of those surveyed, 29 percent responded that they have “experienced ongoing pain for more than three months.” How they dealt with that pain varies.

Where 35.8 percent said they use prescription painkillers, 16.8 responded “exercise” and 37.5 percent responded with “other.” The “other” category could encompass marijuana, physical therapy, massage and “just dealing with the pain.”

“I don’t deny there may be some benefits to certain populations who are in chronic pain,” Moak said. “I’d love to see not as a first line of defense, maybe further down the road after we’ve tried other therapies. Let’s not be so quick to prescribe a pill.”

Other findings from the poll
● Around one in seven adults in Arizona knows a victim of a fatal prescription opioid overdose. Nationally, prescription opioid-related overdoses killed more than 15,000 people in 2015, according to Centers for Disease Control data.

● When asked if they had received a prescription for painkillers from more than one healthcare provider, 10.6 percent said they had. Coleman said, “The reality is, you may go through different doctors, you may go through a GP first who may then send you to a specialist for an ailment.”

State officials have made several steps recently in fighting the state’s crisis.

In January, Gov. Doug Ducey sent a letter to the Arizona Medical Board and Arizona State Board of Osteopathic Examiners pressing for required continuing education in drug addiction for all doctors. The letter came after a Cronkite News investigation revealing that just 250 physicians in the state were disciplined over 16 years for overprescribing opioids, compared to more than 19,000 licensed to prescribe controlled substances.

The DEA is also warning about illegal counterfeit pills made to look like prescription opioids, usually spiked with fentanyl, a highly potent opiate. Maricopa County has tracked 32 overdose deaths linked to the fake pills.

“Nearly 60 percent of Arizonans said they believe that opiate painkillers are very easy or somewhat easy to get,” Thom Reilly, of The Morrison Institute, the organization that conducted the poll, said. “This is despite the continued efforts of state and federal governments trying to restrict the use of opiate use.”

“There are so many of these drugs out there and you go to the dentist and you need a wisdom tooth pulled and sometimes you, they write you for 20 of those, you only needed 10,” he said. “The other ones are staying in your cabinet.”

Humphrey eventually found out that his oldest son started using prescription drugs after raiding leftover Percocet from a friend’s parent’s medicine cabinet. The family eventually got involved with PAL and battled their sons’ drug addiction for years.

Today, his sons are in recovery and he helps other families cope.

“I can’t tell you how many people come through PAL that their kids were introduced to these types of drugs by going to the dentist or the doctor,” he said. “They had their wisdom teeth out and they gave them opioids. And the next thing they know, they can’t not have this drug.”