PHOENIX – After months of council meetings, hundreds of emails sent to city council members and hand wringing from supporters and opponents, Flagstaff residents have an answer about the future of the city’s minimum wage: a more gradual increase that will still reach $15 an hour on schedule.

“It’s certainly going to be a relief to the business community,” said Stuart McDaniel, the vice president of government affairs for the Greater Flagstaff Chamber of Commerce.

But he questioned Monday whether the council ordinance would be considered constitutional because the final wage increase is higher than in Proposition 414, which voters approved in November.

The Flagstaff City Council council voted March 21 for an ordinance that slows the stair-stepped wage increase, raising the wage to $10.50 an hour in July instead of $12 an hour under Prop 414.

The new city law also removes a proposition requirement that the minimum wage in the city be at least $2 above the state minimum wage through 2021.

Bentley, a computer science major, works part-time at a downtown Flagstaff restaurant and said the minimum-wage increase has helped him financially. “It’s helping me out a lot as a young person, so people who have kids and stuff working minimum wage jobs, it’s probably huge for them,” Bentley said. (Photo by Jessica Clark/ Cronkite News)

Bernasconi, chief executive of a nonprofit that helps people with disabilities find jobs, said increases in the minimum wage lessens the chances of clients being hired or keeping their jobs. He said the issue has opened a divide in Flagstaff and “basically ignores the disabled population.” (Photo by Jessica Clark/Cronkite News)

Wilson, store manager, said she favors the minimum-wage increase because she believes well-paid employees benefit the local economy. “I’m happy to pay an extra 25 cents for a cup of coffee in order for the people working there and making that coffee to make a fair and livable wage,” Wilson said. (Photo by Jessica Clark/ Cronkite News)

Olabi, co-owner of the treats shop, said the minimum-wage increase will force his business to increase prices. “I think, overall, it hurts the economy,” Olabi said. “It makes it harder for us to stay in business.” (Photo by Jessica Clark/ Cronkite News)

Taylor, whose group advocated for the minimum-wage increase, said paying workers more money makes sure they can afford to live in Flagstaff. “It’s just the right thing to do,” Taylor said. (Photo by Jessica Clark/ Cronkite News)

But the city then added a provision that would extend the minimum-wage increase through 2022, placing the wage at $15.50 an hour or $2 above the state minimum, whichever is greater.

Voters had approved the city’s Prop 414 in the November election, with the proposition placing the city’s minimum wage even higher than the state minimum that voters also approved in November. 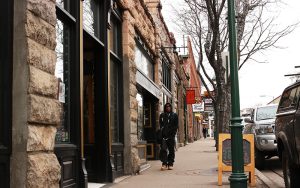 Downtown Flagstaff near San Francisco Street and Aspen Avenue. Business owners, workers and other residents are divided over a minimum-wage hike to $12 an hour in July. (Photo by Jessica Clark/ Cronkite News).

No one spoke against the ordinance at the March 21 city council meeting, according to a video of the meeting, but Prop 414 supporters have said the overall minimum-wage increase was fair to workers.

Bobbi Wilson, a manager at Flagstaff Soap Company who had voted for Prop 414 in November, said she supports the council’s decision. She said it’s a good compromise.

Flagstaff resident Nathan Martinez spoke in favor of slowing down a wage increase, saying that without it, he might lose his job at a local Sam’s Club and be forced to move out of the city, his home of 13 years.

Martinez said he receives job coaching services from Quality Connections, a Flagstaff non-profit organization that helps people with disabilities find employment, according to a video of the meeting.

Business leaders had tried unsuccessfully to have the council approve a special election to have voters consider changing Proposition 414. But it will appear on the November 2018 ballot.