Downtown Flagstaff near San Francisco Street and Aspen Avenue. Business owners, workers and other residents are divided over a minimum wage hike to $12 an hour in July. (Photo by Jessica Clark/ Cronkite News).

The co-owner said business at the shop is not so sweet. Nizar Olabi let minimum-wage workers go, cut the store hours to Thursday through Sunday and will raise prices on popcorn, ice cream and other treats.

He’s worried about Flagstaff’s new minimum-wage law, which will raise the city’s minimum wage to $12 in July and increases it every year until it reaches $15 an hour by January 2021.

“I think, overall, it hurts the economy,” said Olabi, a doctor who opened the store as a side business. “It makes it harder for us to stay in business.”

The wage is deliberately higher than the new, controversial state minimum, which brought the wages up to $10 an hour in January. In Flagstaff, known for its progressive politics, state university and tourism, the new wage has ignited emotional and economic conflicts.

More than 70 people spent their Valentine’s Day evening sharing diverging thoughts about the proposition at a city council meeting where the council ultimately rejected a proposal to hold a special election in May. The special election would have allowed Flagstaff voters to vote on a measure to reverse or alter many of the provisions in Proposition 414.

Some businesses that opposed the higher wage increase have been boycotted, according to a leader of the Greater Flagstaff Chamber of Commerce. But other business leaders and residents support the wage increase as a way to support, attract and keep workers, some saying a raise is long overdue.

Four months after voters approved Prop 414 in the November general election, business owners, employees, public officials and other residents continue to wrestle with the vote. The city council is expected to take up the issue again Tuesday, when council members will consider a measure that would slow the phase-in of the wage increase but still hit $15 an hour by 2021.

“The community is divided,” said Armando Bernasconi, chief executive of a local nonprofit that helps people with disabilities find employment in the city. “It’s a really sad thing to see.” 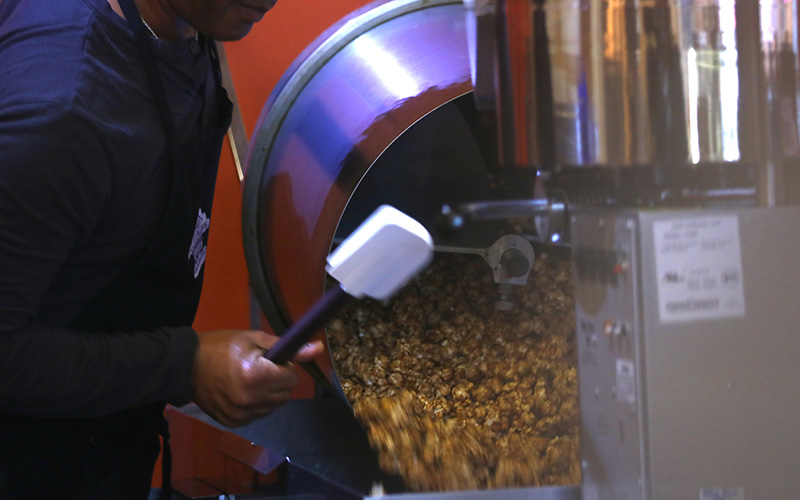 The Flagstaff Soap Company, a locally owned shop that sells natural, handcrafted soap and skin-care products, is down the street and an opinion away from Olabi.

Wilson expects a slight increase in prices for goods and services in Flagstaff but believes customers and businesses can accommodate the change.

“I’m happy to pay an extra 25 cents for a cup of coffee in order for the people working there and making that coffee to make a fair and livable wage,” Wilson said.

Gerardo Alvarado, who spoke through a Spanish-language translator before the city council, said all Flagstaff residents share responsibility to provide workers a living wage.

Alvarado said he is a construction worker and gets paid higher than the minimum wage but knows people who have to work two or three jobs to get by.

“If my wage needs to go down so that actually my community earns more money, I would do it in a second,” Alvarado said.

“They say that Flagstaff is a really good place to live and raise your children but the question is, who is that for?”

Opponents: Too far, too fast

Prop 414 passed 54 percent to 46 percent, according to election records.

Voters approved the local proposition alongside state Proposition 206, another controversial measure that boosted the minimum wage to $10 an hour in Arizona in January. The state minimum wage would gradually increase every year to $12 an hour by 2020 and in later years be adjusted for inflation.

Flagstaff’s Prop 414 requires the city minimum wage always be $2 above the state standard. It also increases wages for workers who receive a substantial portion of their wages through tips.

The city’s minimum wage will jump nearly 50 percent over six months, from $8.05 per hour last year to $12 an hour in July.

Those who are opposed to the law said the increase is too fast to be sustained and fear it will drive small businesses beyond their limits.

“The money has to come from somewhere,” said Stuart McDaniel, vice president of governmental affairs for the Greater Flagstaff Chamber of Commerce.

The chamber joined forces with Elevate Flagstaff, a group of local businesses that gathered more than 8,000 signatures on a petition to hold a special election in May. They called their alternative to Prop 414 the Sustainable Wages Act, requiring Flagstaff adopt the state minimum wage.

At the packed city meeting on Valentine’s Day, the Flagstaff city council turned down the request for a special election by a 5-2 vote, siding with people who said it would reverse the will of the voters who approved Prop 414. But the council plans to place a provision on the ballot in the November 2018 general election.

Some say the proposition hurts a sector that is known for giving back: Flagstaff non-profit organizations.

“Prop 414 basically ignores the disabled population,” said Bernasconi, the CEO of Quality Connections, a local nonprofit that provides job training and assistance for people with disabilities.

Bentley, a computer science major, works part-time at a downtown Flagstaff restaurant and said the minimum-wage increase has helped him financially. “It’s helping me out a lot as a young person, so people who have kids and stuff working minimum wage jobs, it’s probably huge for them,” Bentley said. (Photo by Jessica Clark/ Cronkite News)

Bernasconi, chief executive of a nonprofit that helps people with disabilities find jobs, said increases in the minimum wage lessens the chances of clients being hired or keeping their jobs. He said the issue has opened a divide in Flagstaff and “basically ignores the disabled population.” (Photo by Jessica Clark/Cronkite News)

Wilson, store manager, said she favors the minimum-wage increase because she believes well-paid employees benefit the local economy. “I’m happy to pay an extra 25 cents for a cup of coffee in order for the people working there and making that coffee to make a fair and livable wage,” Wilson said. (Photo by Jessica Clark/ Cronkite News)

Olabi, co-owner of the treats shop, said the minimum-wage increase will force his business to increase prices. “I think, overall, it hurts the economy,” Olabi said. “It makes it harder for us to stay in business.” (Photo by Jessica Clark/ Cronkite News)

Taylor, whose group advocated for the minimum-wage increase, said paying workers more money makes sure they can afford to live in Flagstaff. “It’s just the right thing to do,” Taylor said. (Photo by Jessica Clark/ Cronkite News)

Bernasconi said 15 clients have already lost their jobs or had their work hours cut.

“These are jobs that our guys have been searching for years to find,” Bernasconi said. “They found them and now they’re losing them again.

“The very people that it’s designed to help are actually the ones being hurt the most,” McDaniel said.

McDaniel anticipates increased prices, business closures, and what he calls a “snowball effect” of increased costs.

“Good intentions don’t override the laws of economics,” he said.

Advocates for the proposition said workers have struggled with a higher cost of living than they can afford and deserve more money in their pockets.

“I think we have a more stable economy when we have a greater percentage of our population who can afford just basic needs,” Wilson said.

She said she’s seen her friends wrestle with affordability in Flagstaff.

Two Flagstaff students are especially excited to see the gains.

“It definitely helps because I don’t have to work as much and I can focus on school,” said Isabel Lara, a server at Red Curry Vegan Kitchen and student at Coconino Community College.

Lara said the jump in January came as a surprise, but has helped her to continue to pay her rent, despite the decrease in tips during the slower winter months.

She plans to save the extra money for school and a “nice little cushion” for herself “in case something happens.”

Alex Bentley, a computer science student at Northern Arizona University who works at the Pita Pit in downtown Flagstaff, said he scrambles to pay rent. He recently got a second job.

“It’s helping me out a lot as a young person, so people who have kids and stuff working minimum wage jobs, it’s probably huge for them,” Bentley said.

Jim Taylor, a freelance writer and member of the Flagstaff Living Wage Coalition, advocated for Prop 414, hanging fliers on doors and calling and texting potential voters.