University of Phoenix Stadium is preparing to host its first Final Four. The scoreboard is due to be installed this weekend and the basketball floor will be installed late next week. (Photo by Justin Toscano/Cronkite News).

By the end of Friday, the tournament field will be reduced to 32 and the basketball scoreboard is due to have arrived at University of Phoenix Stadium, the scene of this year’s NCAA Final Four April 1-3.

By the end of Sunday, the tournament field will be reduced to the Sweet 16 and the scoreboard should be hanging from the stadium’s retractable roof.

The installation of the scoreboard — big, well-lit, front and center above the drama — is the most dramatic of the hundreds of details on the minds of the Final Four’s organizers, who have been preparing for the event for two years. The NCAA Tournament always goes quickly, but perhaps fastest for those responsible for the staging of the Final Four.

“Once the bracket was unveiled, it really feels like it’s going to be here tomorrow,” said Dawn Rogers, executive director of the Phoenix Local Organizing Committee.

This week, wires hang from the top of University of Phoenix Stadium, ready to suspend that eight-sided scoreboard. They symbolize the loose ends that remain before the event is played. The basketball court is scheduled to arrive on March 24, one week before the Final Four teams will need the floor for practice. The stadium’s retractable grass has been rolled back to accommodate its arrival.

In its 10 years, University of Phoenix Stadium has hosted football, soccer, concerts and even a LEGO KidsFest. But never a Final Four.

Instead of the normal 63,400 for an Arizona Cardinals game, the stadium’s Final Four capacity will be about 75,000.

“We’ve taken out approximately 5,500 seats, we’re going to be adding about 16,000 seats,” said Scott Norton, director of marketing and public relations for the stadium. “The stadium will look completely different from a standard Cardinals game. We’ll have another seating system that will bring the seats right down to the floor. It will just look a lot different.”

This is the first time the Final Four will be played in Arizona. Around the Valley, traffic flow is a priority. 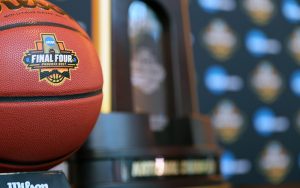 Rogers also said there won’t be any construction throughout Phoenix or Glendale over the big weekend, including no lane or sidewalk closures. Visitors can thank the City Major Events Committee for that.

“We go through and we look at what area the events take place in, and then work with those developers to let them know of the events schedule coming forward, as well as to be able to then accommodate their construction schedule,” said Roxann Favors, Phoenix’s major events administrator.

The semifinal games tip off on Saturday, April 1. The national championship game takes place on Monday night, April 3. But the Final Four events go beyond the on-court action.

FanFest and the March Madness Music Festival are scheduled to be held in downtown Phoenix.

Several acts have been announced for the free March Madness Music Festival at Margaret T. Hance Park. The Chainsmokers will appear there on April 1, and there will be two more acts on April 2: Macklemore and Ryan Lewis, and Aerosmith. As of Wednesday, the March 31 acts have not yet been announced.

Fans can use Uber, Lyft, the light rail and buses throughout the weekend. 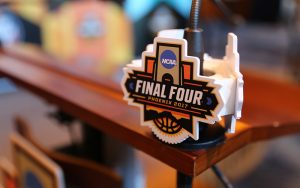 A close-up of the offical 2017 Final Four Phoenix logo on a mic stand in the Phoenix Convention Center on Jan. 25, 2017. (Photo by Nicole Praga/Cronkite News)

“Transportation really encompasses every different way that somebody could get to the stadium. We’ve been meeting, for example, extensively with Valley Metro, to make sure they will supplement their bus service from the end of the line out to the stadium.”

“We have great volunteers,” Rogers said. “I think that’s one of the things the Valley does so, so well.”

Norton, the University of Phoenix Stadium official, said, “You know, we’re ready to roll out the red carpet for everyone.”

That carpet will be on the floor, and far up above will be that scoreboard, which at that exciting point will be the only one anyone needs to track March Madness.