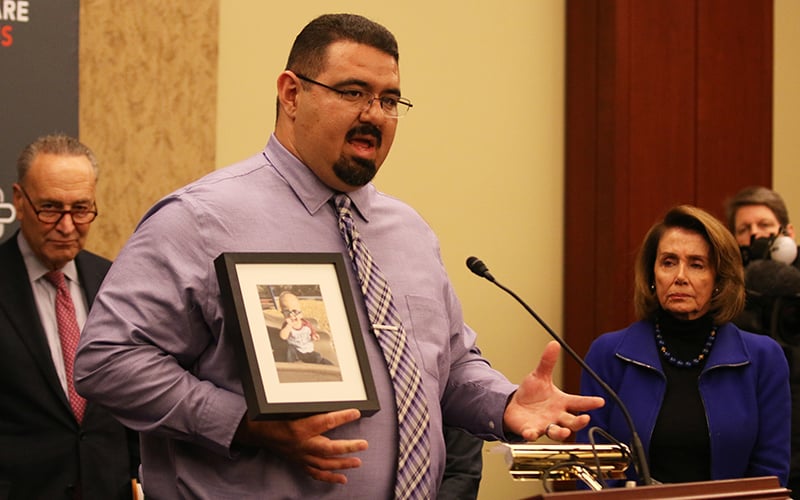 Gilbert resident Steve Gomez told a Capitol news conference that the Affordable Care Act helped him and his family afford the care for his 18-month-old son who underwent a heart transplant. (Photo by Andres Guerra Luz/Cronkite News) 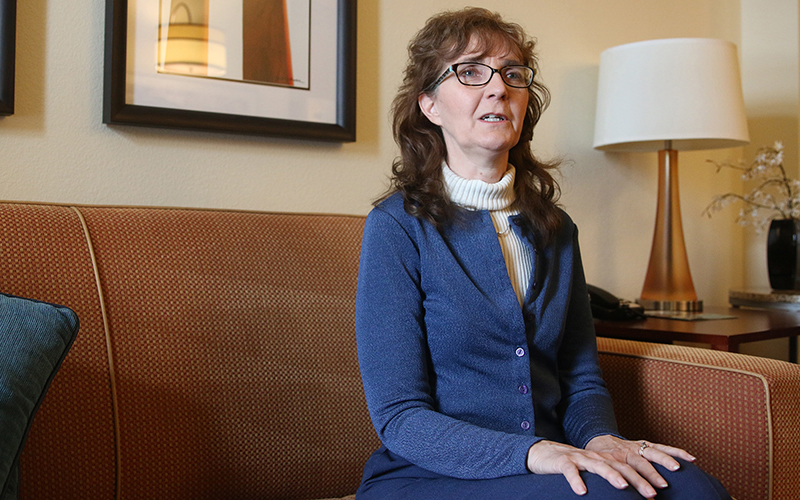 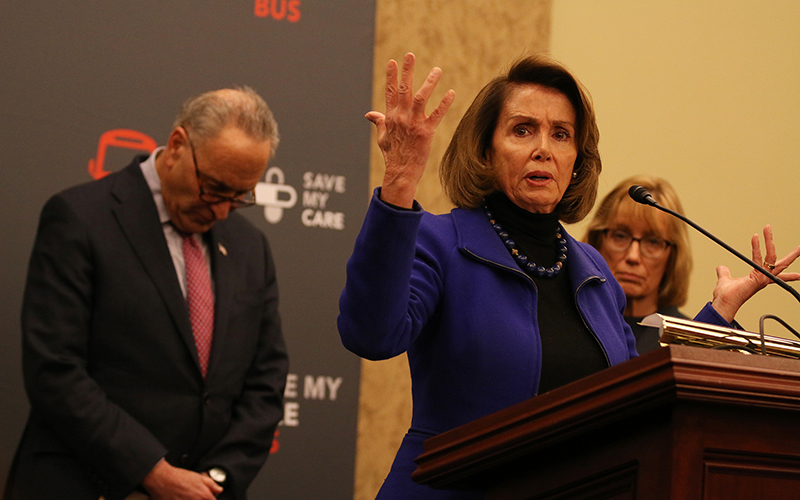 Gilbert resident Steve Gomez holds a picture of his son Anthony, who required a heart transplant as an infant, treatment Gomez said was possible because of Obamacare coverage. (Photo by Andres Guerra Luz/Cronkite News)

WASHINGTON – Two Arizonans were in Washington this week with stories of how the Affordable Care Act has affected them – stories that came down on opposite sides of the debate over whether the health care law should be replaced.

Gilbert resident Steve Gomez said that it was because of the act, better known as Obamacare, that his 18-month-old son was able to get a needed heart transplant last year. Doing away with Obamacare now would “condemn” families like his, he told congressional leaders Tuesday.

A day earlier, Phoenix resident Kim Sertich was at the White House where she told President Donald Trump that under the ACA’s independent insurance marketplace she has seen her premiums skyrocket and has had her coverage canceled three times since 2010. She’s not sure what should take its place, but thinks Obamacare can’t be repealed fast enough.

“We need to have a system where everybody is provided for,” Sertich said Tuesday.

The two were in Washington as lawmakers sparred over a Republican proposal to replace the Affordable Care Act with a plan of their own, the American Health Care Act.

That 122-page bill, introduced in the House on March 6 and already pushed through two House committees three days later, would eliminate the insurance mandate under Obamacare, that required people to get insurance or face a tax. It would also cut some taxes that supported the ACA and increased health-savings accounts while keeping protections for patients with pre-existing conditions.

Republicans say their plan would give consumers more choices while holding down premiums – which increased 116 percent this year in the ACA marketplace in Arizona, one of the steepest rises in the nation.

But a Congressional Budget Office report released Monday said that the GOP plan would reduce the federal deficit by $337 billion over the next 10 years, but it would also cause 14 million Americans to lose their insurance in the short term, a number that would grow to 24 million by 2026.

Democrats have seized on the CBO report as evidence that the Republicans’ plan is what House Minority Leader Nancy Pelosi called a “reverse Robin Hood stunt” that would take billions of dollars away from people who need it most and give it to people who need it least. They said the tax cuts in the plan would benefit mostly higher-income taxpayers.

Pelosi and Senate Minority Leader Chuck Schumer were among those at the “Save My Care” news conference Tuesday where Gomez and other Obamacare supporters spoke, the culmination of a cross-country bus tour to rally support for the ACA.

Dr. Alice Chen, executive director of Doctors for America, said they expected the impact of an Obamacare repeal to be bad, but that the numbers in the CBO report confirmed those fears.

“As a doctor I am pleading with members of Congress: Don’t take away our patients’ care,” Chen said.

Schumer wondered why anyone would want to put people in situations where they have to worry about affording health care. Which is exactly where Gomez said he would have been without the ACA.

Gomez, holding a framed picture of his son Anthony, told a crowded room on Capitol Hill that when Anthony’s 10-week hospital stay last year racked up $2.5 million in hospital bills. If not for the health insurance they were able to get under the ACA, he said, the family would have had to pay out of pocket.

Gomez, who works in cell tower construction, said he would work two or three jobs to pay the bills if he had to, but “I shouldn’t have to do that to make sure my son can grow up and live to grow up.”

Anthony’s not out of the woods yet. Gomez said his son currently requires medication and therapy and will eventually need another heart transplant. He worries that if Obamacare is repealed, Anthony will not be able to get insurance coverage in the future or will face prohibitively high premiums because he has a pre-existing condition.

But Sertich said she has had her own coverage repeatedly canceled because of what she sees as a broken health insurance system under Obamacare.

Sertich, who owns a small graphics design company, said that getting independent health insurance coverage was not a problem for 25 years before the Affordable Care Act took effect. But she lost coverage in 2010, the year Obamacare passed. She went into the insurance marketplace to get coverage, but saw it canceled twice more over the next few years,

Faced with repeated cancellations, rising premiums and a shrinking number of insurers to choose from, Sertich finally decided to opt out of formal coverage, turning to a faith-based provider instead.

While she opposes the ACA, Sertich acknowledged that there is opposition to the GOP replacement plan. She said she just hopes Congress can work together to help people like her.

“There needs to be a middle ground in there somewhere, so there’s not a forgotten group,” she said.