A Congressional Budget Office report on the GOP plan to replace Obamacare said it would reduce the federal deficit by $337 billion over 10 years, but would add 24 million Americans to the ranks of the uninsured in the same period. (Photo by Alex Proimos/Creative Commons) 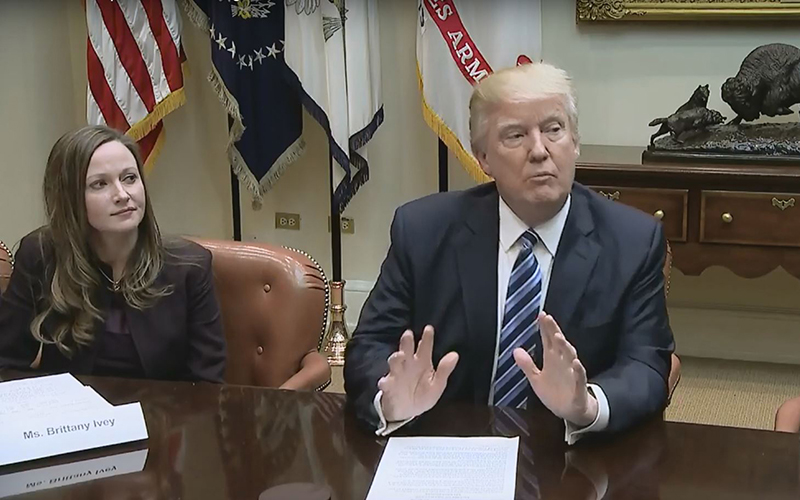 President Donald Trump, at a White House “listening session” on problems under the Affordable Care Act, said he would tell Americans who are worried about losing coverage under a replacement plan that “it’ll get better” under a proposed replacement. (Photo courtesy whitehouse.gov)

WASHINGTON – Arizona Democrats lambasted the GOP-proposed healthcare plan Monday after a Congressional Budget Office report said the plan would reduce the federal deficit by $337 billion over 10 years, while leaving as many as 24 million more Americans uninsured.

“Congress should be focused on finding real solutions that protect access to coverage, not playing partisan politics with the health and wellbeing of millions of Americans,” said Rep. Tom O’Halleran, D-Sedona. “With hundreds of thousands of Arizonans expected to lose coverage, it is past time for Congress to work together on a bipartisan solution.”

Arizona Republicans did not immediately respond to requests for comment, but House Speaker Paul Ryan defended his plan, pointing to benefits of the American Health Care Act highlighted in the CBO report.

“This report confirms that the American Health Care Act will lower premiums and improve access to quality, affordable care,” Ryan’s statement said. “CBO also finds that this legislation will provide massive tax relief, dramatically reduce the deficit, and make the most fundamental entitlement reform in more than a generation.”

Ryan acknowledged “concerns about making sure people have access to coverage,” but said something needs to be done to replace the Affordable Care Act, dubbed Obamacare.

Arizonans for, against keeping Obamacare bring their stories to Washington

“Under Obamacare, we have seen how government-mandated coverage does not equal access to care, and now the law is collapsing,” his statement said. “Our plan is not about forcing people to buy expensive, one-size-fits-all coverage.”

Under the replacement plan, according to the CBO report released Monday afternoon, 14 million more people would be uninsured by 2018 than under current law. That number is expected to jump to 24 million by 2026, the report says.

In regards to Medicaid, the report says that the AHCA would end the enhanced federal funding to states to help cover new enrollees under Obamacare. That would likely discourage states that have yet to expand Medicaid from doing so, and may even lead to some states curtailing expanded Medicaid because of the increased financial burden on the state level.

While it would save money in Medicaid outlays, the GOP plan would reduce revenues by cutting surtaxes on “certain high-income taxpayers,” the CBO said.

The report also said that the AHCA would also lead to increased average premiums for the first two years. Those would eventually be offset by younger enrollees, grants to states from the bill’s Patient and State Stability Fund and the elimination of a requirement that insurers offer plans covering part of the cost of receiving benefits.

One advocate accused congressional Republicans of making decisions for Americans that “no person would make … for their family.”

“That’s a tragedy for our nation, but even more traumatic are the millions of individual nightmares that will play out if this bill becomes law,” said a prepared statement from Leslie Dach, the director of the health advocacy group Protect Our Care Campaign. “Parents with sick children who won’t be able to afford care, older Americans who will see their premiums skyrocket, and every person worried about paying for their prescription drugs.”

The Arizona Democratic Party called the GOP healthcare plan evidence of a deceptive presidency, and it put a target on the backs of Arizona Republicans who supported the replacement legislation.

“President (Donald) Trump’s pledge of ‘insurance for everybody’ is the most heartless, consequential deception of this tragic, post-truth administration,” said Arizona Democratic Party Chair Alexis Tameron in a statement following the report’s release.

“Arizona’s Republican members of Congress are complicit in this disaster by fast-tracking legislation that ultimately leaves Arizonans to fend for themselves, while the most wealthy Americans, including insurance company CEOs, enjoy yet another tax break,” she said.

The White House did not respond directly to the CBO report Monday. But President Donald Trump held a “listening session” earlier in the day with a dozen Americans who shared horror stories about their coverage under Obamacare, including Arizona resident Kim Sertich who told the president her insurance was canceled three times under the ACA.

When asked what he would tell Americans who fear losing coverage under the GOP replacement plan, Trump said, “It’ll get better,” but it could take some time.

“If we’re allowed to do what we want to do it’ll get better, much better,” he said. “Hopefully it’ll get very good.”