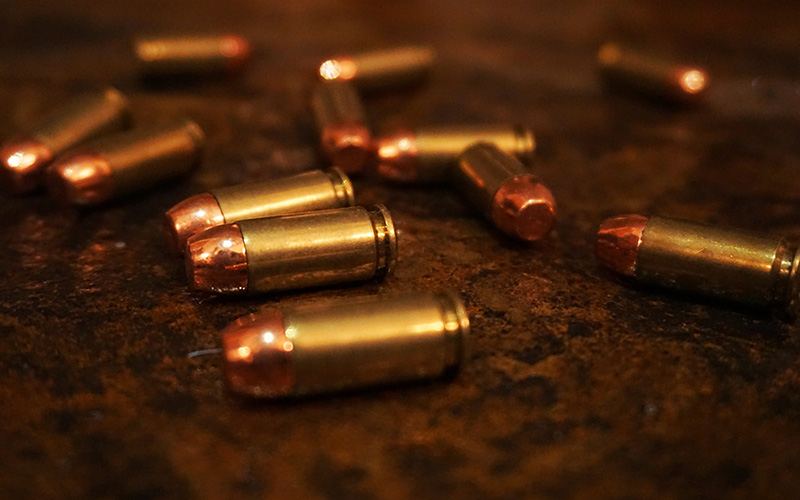 If passed, House Bill 2287 would protect those who claim they accidentally fired gun shots into the air. (Photo by Lexi Hart/Cronkite News)

Currently, Arizona law makes it a Class 6 felony to negligently discharge a firearm within a mile of an occupied structure. Instead, Rivero wants to narrow the scope to charge only those who fired the weapon “intentionally, knowingly, or recklessly.”

The difference is subtle, but it’s significant because it would require prosecutors to prove a shooter’s intent.

“The teeth of the law are still there,” he added. “If somebody is being reckless … shooting up wildly because they’re drunk or celebrating … they’re still going to be charged.”

The change proposed in HB 2287 has divided Legislature and the public. More than 250 people signed up in support of the bill, including the National Rifle Association and the Arizona Citizens Defense League. However, more than 200 registered their opposition, including representatives from the League of Arizona Cities and Towns and the Arizona Association of Chiefs of Police.

Edith Smith, the aunt of Shannon Smith – for whom Shannon’s Law is named – said she feels gun owners must take responsibility.

Smith added that it’s difficult to get into someone’s mind, and she expressed her concern that HB 2287 would diminish the effect of Shannon’s Law.

The bill has passed the state House of Representatives, and the Senate’s government committee moved the bill forward last week.

During the Senate government committee’s hearing, legislators discussed the nuances of the bill’s language. Sen. John Kavanagh, R-Fountain Hills, described the differences between negligence and recklessness.

“If a person perceives the risk and does the act anyway, they’re reckless,” he said. “If they’re not too bright, and they don’t realize the danger, they’re negligent.”

He said the major issue at hand is whether or not someone with “no evil intent, who was unaware they were doing something dangerous” should face a felony versus a misdemeanor charge.

Arizona does not require any training or a license to get a gun. However, in most cases, people with felony convictions can’t own a gun under federal law.

Bullets, depending on wind speeds and trajectory, can travel up to several miles, NRA certified instructor Melodie A. Coffman said. Because of gravity, the speed of a falling bullet can still be deadly.

“If you get to that point where you feel you need to draw your gun, you better be sure you need to point it at somebody and stop a threat,” she said while teaching a class at Arizona Firearms in Gilbert. “You don’t just fire randomly into the air because you don’t know where it’s going to go.”

Hand-held pistols like these on display at Legendary Guns of the West, are considered the most common for self defense purposes. (Photo by Tea Francesca Price/Cronkite News)

She said it’s up to the gun owner to get proper training.

“You have to know which direction you can shoot,” Coffman said. “It sounds gory, but if somebody breaks into your house and comes into your bedroom, and your kid’s bedroom is right next door to yours, you can’t point towards that wall.”

Although prosecution under Shannon’s Law is rare, HB 2287 would increases the challenge for prosecutors proving intent in addition to lowering the penalty for irresponsible use of a firearm to a misdemeanour.

A spokeswoman with the Maricopa County Attorney’s Office said the office has not prosecuted anyone involved in an accidental shooting under Shannon’s Law because the statute already classifies the behavior as criminally negligent conduct, which is “conduct beyond an accident.”

Coffman said she has heard about two local cases of accidental shootings, and neither of the two women were prosecuted for accidentally setting off their guns within city limits.

“One case, for whatever reason, she had it loaded next to her bed and stepped on it in the middle of the night,” Coffman said. “The gun went bang. She was fine. It just scared the crap out of her. Another one, an older lady in her 80s up in north Scottsdale, always kept her gun loaded on the counter. One day she was cleaning, gun fell on the floor and went bang.”

“You’re still discharging a gun within city limits, even if it’s accidental,” Coffman said. “In both of those cases, they weren’t charged with anything, but they certainly can be.”

Police will respond to calls of “shots fired” and conduct an investigation. While Phoenix police officials said they can’t comment on pending legislation, Sgt. Vince Lewis said they receive thousands of calls for “shots fired” in a year.

He said it’s important to consider that each call to police does not necessarily equate to a bullet fired. People often mistake loud noises for gunfire and each “shot” heard could generate multiple calls.

Phoenix Mayor Greg Stanton released a statement saying he opposes any changes to Shannon’s Law. He described the law as effective while not infringing on anyone’s Second Amendment rights: “Attempts to weaken Shannon’s Law are dangerous. Since her law passed, we have made real progress reducing the frequency of celebratory gunfire – and that saves lives.”

As 14-year-old Shannon Smith chatted with a friend on the phone, she stepped into her back garden for the last time. At home in the Windsor Square Historic District near Central Avenue and Camelback Road, there was no inkling of danger on that June evening in 1999, Edith Smith said.

Yet a stray bullet fell from the sky, piercing Shannon Smith’s skull and claiming her life. Her parents, Otis and Lory Smith, discovered their daughter faceup on the ground and called 911.

“Shannon had thick hair,” Edith Smith said. “They didn’t even know she was shot until she got to (St. Joseph’s Hospital and Medical Center).”

Nearly 17 years later, authorities still don’t know where the bullet came from or who shot it. 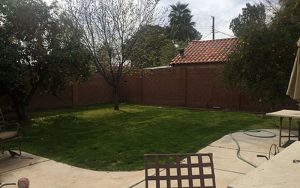 A stray bullet struck and killed Shannon Smith, 14, in her backyard while she was talking on the phone to a friend in 1999. (Photo by Tea Francesca Price/Cronkite News)

After Shannon’s death, Otis and Lory learned that Arizona’s penalty for thoughtless discharge of a firearm was a misdemeanor. Because it was hard to trace a shot and the maximum fine was $250, it was not worth the police and prosecutors doing anything about it, Edith Smith said.

The Smiths, with support from friends and neighbors, launched an effort to pass legislation that would reduce “celebratory gunfire.” Edith Smith said her brother, Otis Smith, who was a Phoenix attorney, used to say that it wasn’t about gun control. Rather, the goal was to get people to be responsible gun owners and citizens.

“It was just such a horrible tragedy that a 14 year old could die so unexpectedly, totally innocent and for such a stupid thing,” Edith Smith said. “Suddenly, people were aware of what happens when you shoot a gun into the air … the speed doesn’t dissipate, if it goes up, it comes down.”

In 2000, after a year, then-Gov.Jane Hull signed the bill into law in the Smiths’ front yard.

Edith Smith now lives in the same house where her niece was killed. She moved in after the deaths of Shannon’s parents: Lory died in 2008 and Otis in 2015. Edith Smith gestures to a large canvas of a painted sunflower on top of the piano, explaining that Shannon was the artist.

“She was our sunflower,” she said. “She was a really sweet, little girl and young lady. We can’t bring her back, but that’s not the point. The point is to have enough of a penalty to make people pay attention and understand. Why change something that works?”