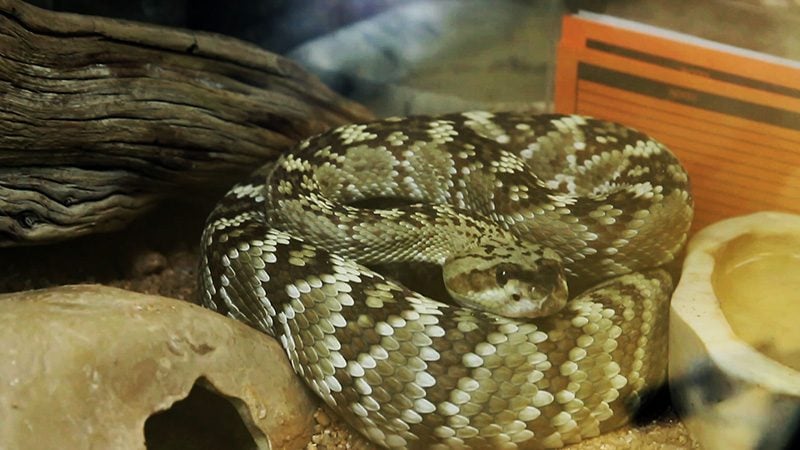 This black-tailed rattlesnake, housed at the Phoenix Herpetological Society in Scottsdale, is venemous and can be found throughout most of Arizona. (Photo by Chelsea Shannon/Cronkite News)

One state representative wants to tweak that law – commonly referred to as “Shannon’s Law” – and add an exemption for people to shoot rat or snake shot.

Rep. Jay Lawrence, R-Scottsdale, sponsored the bill. He did not return requests for comment.

Charles Heller, a spokesman for gun-rights group Arizona Citizens Defense League, supports the bill and said shooting snakes has been a long-time practice in Arizona. He also said he believes there is no controversy behind it.

“There’s the obvious concerns about shooting guns in town. I mean, this could be across the street from schools,” he said. “At the very least, the bill is not specific enough to address other people’s concerns, like maybe it’s not a good idea to be firing handguns of any caliber near a mall, near a school, or a church or an apartment complex or in like the majority of the city where snakes don’t live.”

“There’s nothing controversial about shooting a rattlesnake. People act like this is some new and amazing thing, and it’s not like people in Arizona haven’t shot a rattlesnake before, you know,” Heller said. “It’s not like you’re spraying bullets in the community.”

Heller said snake shot is very small, comparable to shotgun pellets, but they do not go as far, and there are not as many pellets in a round.

Every year, there are about 8,000 venomous snake bites in the United States, according to the Arizona Poison and Drug Information Center. They usually result in eight to 15 deaths per year nationally.

Sandy Bahr, chapter director of the Grand Canyon Sierra Club, said people shouldn’t handle snakes themselves. She said people will go to pick the snake up after thinking that they killed it, and the snake will bite them.

In Arizona, there are 17 types of venomous rattlesnakes, according to the poison center.

Hughes said fire departments and companies such as Rattlesnake Solutions have been trained on how to remove the venomous reptiles, and residents should call them. The companies catch the snakes without shooting them.

“When people go after and try to catch or kill a snake themselves, and they’re not trained to do it, that’s when a lot of bites happen,” Hughes said. “In those situations, removing a Pit viper is not a do-it-yourself kind of thing.”

However, Heller said that this DIY remedy is nothing new.

“Shooting a rattlesnake on your own property has been a very common practice since long before we were a state,” Heller said.

Heller said if people apply the basic rules of gun safety, they will not endanger anyone except the snake.

House Bill 2022 passed the state House in a party-line vote and is currently in the state Senate.