Liu said he was frank with the parents, who wanted to put a stop to their sons’s suffering from a terminal illness. He advised them not to pursue an early death for their child because it’s not something they would want on their conscience.

“In their pain and suffering they wanted to end it much more quickly than natural courses would take,” said Liu, who recalled the story as he spoke in favor of Senate Bill 1439 at a Senate health and human services committee meeting this week.

“We need this protection to be able to do what our conscience tells us to do,” – Dr. Paul Liu

Some support the bill to shield health care providers from retaliation or discrimination if they deny an ailing patient’s wishes to avoid expansive medical measures or, as the bill reads, end their life early, such as by “assisted suicide, euthanasia or mercy killing.”

“We need this protection to be able to do what our conscience tells us to do,” said Liu, a doctor at Phoenix Children’s Hospital.

Opponents said they are worried the proposed law could deprive patients of their right to choose how they die.

Julia Jones said she is dying of lung cancer. The 62-year-old says she wants to die peacefully, surrounded by her family and without taking any extraordinary medical measures such as being hooked up to a life support machine.

“It would be my luck to walk in and I would be stuck with one of the doctors who feel that in their conscience, they cannot do this,” Jones said.

“What about my wishes?” she asked. 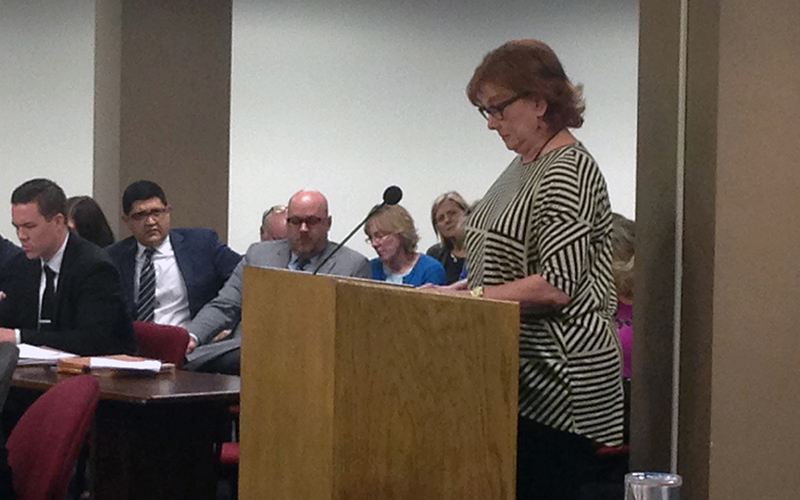 Julia Jones, 62, drove from Prescott to speak against a bill she said would interfere with her end-of-life decisions. Jones said she is dying of lung cancer and doesn’t want extreme medical measures. (Photo by Saundra Wilson/Cronkite News)

The committee passed the bill 5-2, making it likely to be heard by the full Senate.

Health care providers are now protected from retaliation under the Affordable Care Act, but Sen. Nancy Barto said she sponsored the bill because of the possible demise of the act. The 2010 federal law was designed to protect health care providers who, for personal or religious reasons, chose not to provide services that, while legal, went against their conscience.

Some at the hearing expressed concerns about what the bill covered, what would be prohibited and how it would affect personal choices about health care.

Sanda Schuldmann, Jones’ friend, said she drove from Tucson to share her thoughts with the committee.

“I don’t want anybody to be able to deny me my wishes at the very end of life,” Shuldmann said before the hearing.

“This bill leaves a lot of gray area and I don’t think it does any good for anybody, those who are for it and those who are against it,” Shuldmann said.

She said patients are protected through advanced directives, living wills and do-not-resuscitate orders.

Barto, who heads the Senate health and human services committee, told Schuldman and Jones the bill would not affect advanced directives.

She said patients would still have access to other providers willing to accommodate their wishes.

“I think most people look at it from the patient end, saying ‘I want to have that right’. And they do, they have that right, but the provider should also have the right,” Liu said after the hearing. 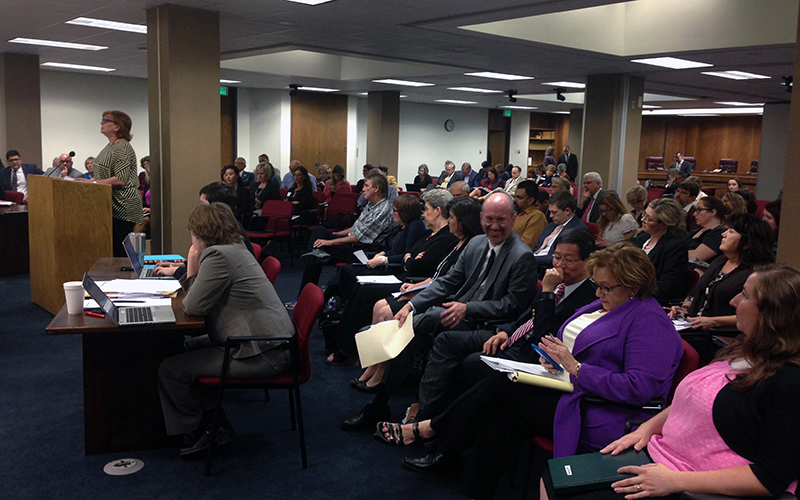 Under the bill, health care providers could not be fired, transferred, demoted or lose other privileges such as board certification if they refuse a patient’s directives. Providers who feel they’ve been discriminated against can sue.

Barto, a Republican, said the bill also builds on state law by extending protections to all health care providers and institutions. The bill would extend protection to situations that are not related to advanced directives or surrogate decision makers, Barto said.

Other advocates for the bill said it supports religious freedom.

“No one should have to choose between their profession and their religious beliefs,” the Center for Arizona Policy, a conservative policy group, wrote in a statement.

“The language is written to protect the autonomy and individual convictions of each health care provider,” the statement says.

Some in the health care community were wary of the bill’s language.

“This can be much broader and much bigger because of what this doesn’t address,” Susan Tunks, chief operating officer for Sacred Heart Hospice in Phoenix, said in an interview.

“The last thing you want when someone’s on their final journey and they’re in their final dying process is to have conflict,” Tunks said.