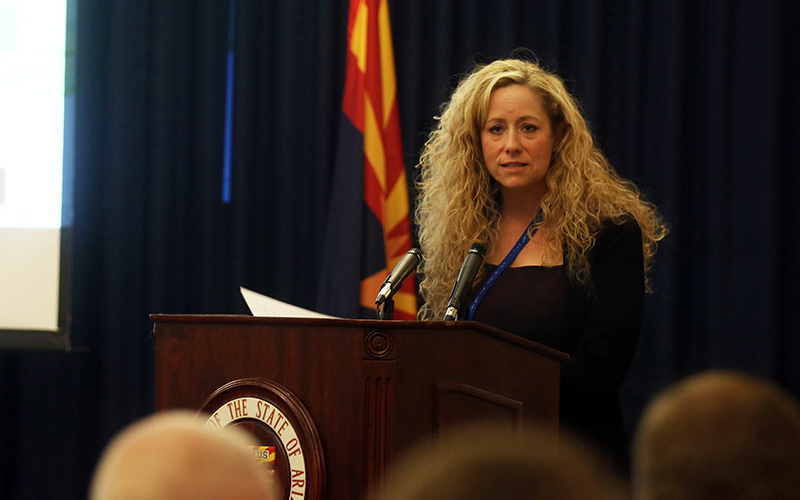 Dr. Cara Christ, director of the Arizona Department of Health Services, said the state’s goal is to get “85 percent of Arizona’s population covered by first responders who are trained and carrying naloxone.” (Photo by Jessica Clark/ Cronkite News).

PHOENIX – The Governor’s Office for Youth, Faith and Family will release about $3.5 million in new funding for substance abuse prevention programs for high school youth – a key demographic to target when tackling Arizona’s opioid epidemic.

Debbie Moak, director of the office, said at a news conference on Tuesday to discuss Arizona’s opioid epidemic that Gov. Doug Ducey has placed priority on combatting substance abuse. A critical part of the effort is prevention, especially for Arizona’s youth, she said.

“I want people to begin looking further upstream to prevent first-use by our youth,” Moak said. “Ninety percent of all addiction occurs from youth starting to drink and use drugs during the teen years. To me, that’s a clear target. That has a bullseye on it and I know where to direct my resources.”

The announcement came one week after the premiere of “HookedRx: From Prescription to Addiction,” a 30-minute documentary by Cronkite News that examined Arizona’s prescription opioid epidemic. The documentary, which was produced in partnership with the Arizona Broadcasters Association, was broadcast on all Arizona television stations and most radio stations.

“I applaud the efforts of ASU and the students who created this awareness,” Moak said. “But we realize that as this epidemic, opioid addiction, sweeps the nation and here in Arizona, that there needed to be a strong call to action. The communities needed a response to the airing of ‘Hooked.’ ”

The funding comes from the substance abuse prevention and treatment block grant, a federal grant from the Substance Abuse and Mental Health Services Administration. The grant mandates that 20 percent of the funds be allocated for preventative measures, though the $3.5 million is only a portion of that 20 percent.

“Through this competitive grant process, those funds will be available,” Moak said.

High schools can apply for prevention program funding through procure.az.gov.

“We’re very excited,” Moak said. “We’re hearing the enthusiasm from high schools that they can embed these programs into their high school.”

As part of Ducey’s effort to reduce opioid abuse, the governor created a task force that made 104 recommendations to tackle the issue in Arizona. More than 600 people died in Arizona in 2015 from opioid addiction and overdoses, and Ducey has set a goal to reduce opioid deaths by 25 percent by 2018, according to Arizona Department of Health Services director Dr. Cara Christ. The governor is aiming to cut opioid deaths in half by 2021.

“Our goal is get 85 percent of Arizona’s population covered by first responders who are trained and carrying naloxone. Because again, minutes count,” Christ said. “We’re also going to be developing education to help family, friends and others at risk of overdose, teaching them the importance of having naloxone easily accessible and the critical steps to take if someone does overdose and you need to administer.”

In addition to targeting high school youth, the state has launched a pilot program administered in one seventh-grade classroom in each of Arizona’s 15 counties, along with rethinkrxabuse.org to draw more attention to substance abuse prevention education.

According to Moak, the substance abuse in Arizona has come to the point where expanded treatment is necessary, but prevention among youth is critical to curb the epidemic.

“We have to save lives, but we have to go back to what we know, which is that we can prevent,” Moak said.