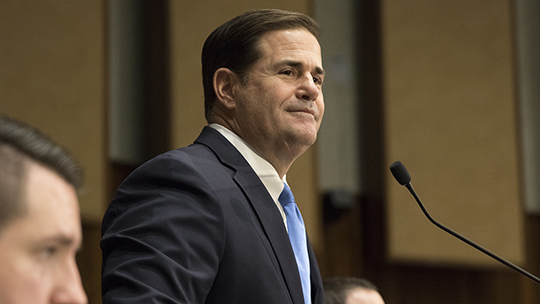 Arizona Gov. Doug Ducey gives his State of the State speech in the House of Representatives building at the state Capitol in Phoenix. (Photo by Josh Orcutt/Cronkite News)

Arizona ‘proactive’ in fighting opioid abuse, but has more work to do

Medical boards can take years to penalize doctors who overprescribe

“A critical component to fighting this opioid epidemic is ensuring our state’s doctors have the training and expertise necessary to identify and treat addiction,” he wrote in his letter, published online Monday during the speech.

This came days after Cronkite News published an investigation that found some doctors overprescribed powerful opioid painkillers for years before being disciplined. And in some cases, they continued to practice without restrictions even after they were sanctioned multiple times.

Only 250 physicians have been disciplined in the last 16 years for overprescribing opioids – compared to the more than 19,000 currently licensed to prescribe controlled substances.

In another Cronkite News story, experts and doctors advocated for increased addiction training for doctors, saying it was key to solving Arizona’s prescription opioid abuse problems.

Although Arizona has developed a training program for doctors on prescribing opioids and treating chronic pain, the state does not mandate doctors take continuing education in pain management, controlled-substance prescribing or substance-abuse disorders – as several other states do.

Once doctors graduate medical school, they must take 40 hours of continuing medical education every two years before the Arizona Medical Board or the Arizona Board of Osteopathic Examiners will renew their license.

However, the doctors choose the courses. Ducey wants the boards to require one of the 40 hours be in the area of addiction or Substance Abuse and Mental Health Services Administration-supported opioid prescribing.

During his speech, Ducey said drug addiction was a “problem that knows no bounds.”

“We’ve started to address it in a serious way, cracking down on ‘doc’ shopping, providing better treatment options, limiting first fill on opioids,” he said.

In the State of the State speech, traditionally made at the beginning of each legislative session, Ducey also revealed that he had issued an executive order to provide prison inmates greater access to Vivitrol before and after they are released. The monthly injection blocks the effects of drugs on the brain, especially opiates, and isn’t addictive like other replacements such as methadone.

“Addiction is very prevalent in Arizona. … I think he’s trying to tackle it from a different angle, which needs to be done,” he said.

Since 2010, more than 3,600 people have overdosed and died from opioids in Arizona. In 2015, the dead numbered 701 – the highest of any year before, according to an analysis by the Arizona Department of Health Services.