More than 131 million doses of flu vaccine have been given this year, but there’s still time to get vaccinated before peak flu season hits, health officials say. (Photo by Lance McCord/Creative Commons) 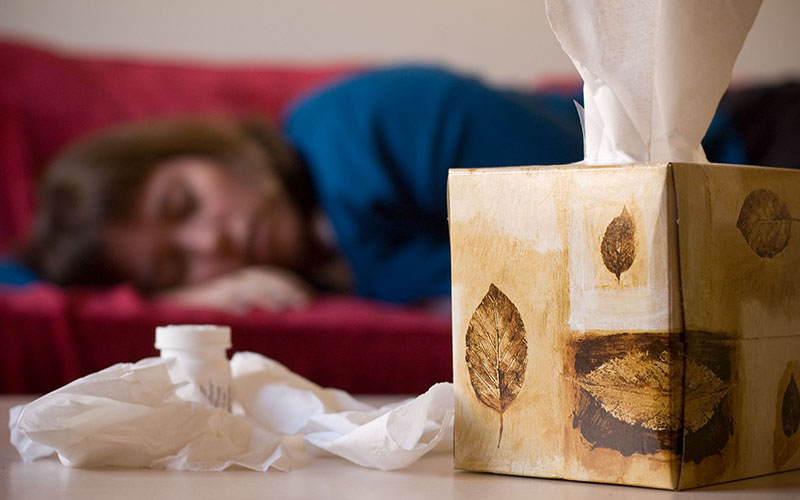 Most of us know the flu as a feverish and achy ailment, but health officials say it should not be taken lightly, that it can cause serious respiratory illness or worse. (Photo by Laura Mundee/Creative Commons)

WASHINGTON – Get ready to roll up your sleeves.

The Centers for Disease Control and Prevention is recommending against nasal-spray vaccines for the upcoming flu season, in which it expects to see a variant of 2009’s H1N1 virus.

And while Arizona is still about a month away from peak flu season, medical experts are advising residents to get vaccinated “sooner rather than later” to head off the virus.

“The best way to protect yourself from influenza is to get vaccinated,” said Jessica Rigler, branch chief for public health preparedness at the Arizona Department of Health Services.

Arizona had already confirmed 25 flu cases from six counties as of Nov. 26, according to the department, but Rigler said the peak influenza season for the state typically falls in the beginning of the year – January, February and March.

The CDC said that more than 131 million doses of flu vaccine have already been given from the 157 million to 168 million that manufacturers predict they will be able to produce this year. While nasal vaccines are still available, the CDC is recommending against their use this year because of questions about their effectiveness.

The vaccines target four strains, but the CDC said one strain that has been identified this year is similar to the “swine flu” virus that erupted in 2009 and is “often associated with more severe illness, especially in people 65 and older.”

The largest groups at risk from the flu are the elderly, young children, pregnant women, American Indians and Alaskan Natives, according to the CDC.

But Rigler – like the CDC and every other expert – said the flu “is a really unpredictable virus.” Medical experts say there is a possibility the virus could evolve or change in the coming months – even before it spreads to Arizona.

“It’s not uncommon to see one strain predominate in the beginning of the season and another to predominate later in the season,” said Kristen Nordlund, a CDC spokeswoman.

Will Humble, a member of the Arizona Public Health Association board and the former director of the Arizona Department of Health Services, echoed Nordlund, noting that the virus “mutates a little bit every year.”

As of now, Humble said this year’s vaccine is protecting against reported strains of the virus in certain parts of the country.

“It’s always a good thing when the vaccine that’s in the pharmacies and the doctors’ offices is a good match with the strains that are circulating in the community, and that’s the case this year – at least so far,” he said.

While it is difficult to predict the severity of the strain each year, the influenza virus is not something to be taken lightly, Humble said.

“It can be a really serious respiratory virus,” he said.

Humble said it can affect the lungs if not treated, adding “it can be really serious, especially for people with pre-existing medical conditions.”

A CDC report on the virus said it can infect the nose, throat and lungs and can cause mild to severe illness. Symptoms include feeling feverish, having a sore throat, runny or stuffy nose, muscle or body aches, headaches and coughing.

While Arizona has not hit peak flu season, states like Texas, Washington and Oregon reported local cases as of Nov. 30 in the CDC’s “Weekly U.S. Influenza Surveillance Report,” which tracks where and at what level influenza is spreading across the country.

The map is already showing a spread of the virus, with an early November report showing sporadic cases in most of the country, including Arizona.

But, as always, it’s unpredictable.

“Sometimes we’ll see our peaks very early in the year in January, last season we actually saw the flu season peak in the middle of March,” Rigler said.

She said the best thing people can do to prevent catching the virus is to get the vaccine, wash their hands regularly throughout the day and stay home from work or school when they feel sick.