Protesters resisting the Dakota Access Pipeline stand with their signs outside of the U.S. Army Corps of Engineers in downtown Phoenix. (Photo by Bri Cossavella/Cronkite News) 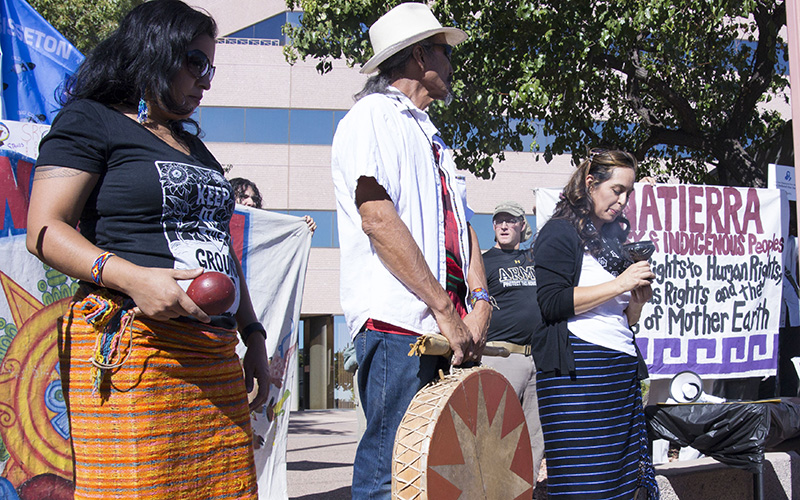 Native Americans prepare to perform a ritual at the protest against the Dakota Access Pipeline in downtown Phoenix. (Photo by Bri Cossavella/Cronkite News) 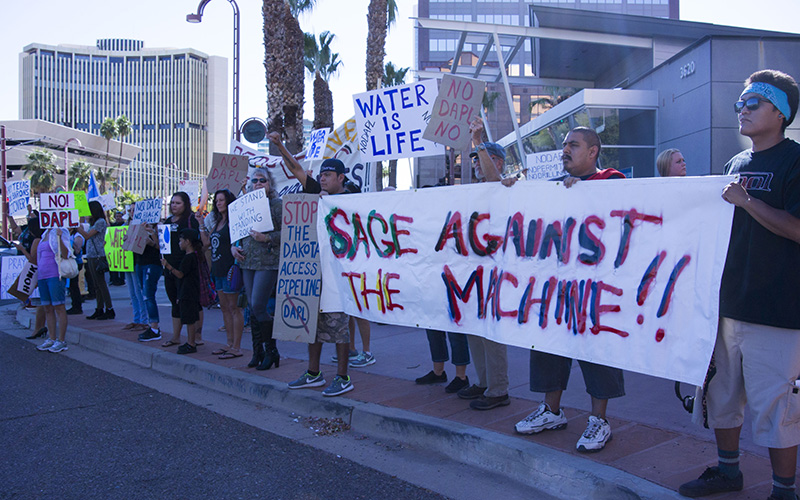 Organizers called a “National Day of Action” as protests of the Dakota Access Pipeline were held across the country. Protesters gathered in downtown Phoenix. (Photo by Bri Cossavella/Cronkite News) 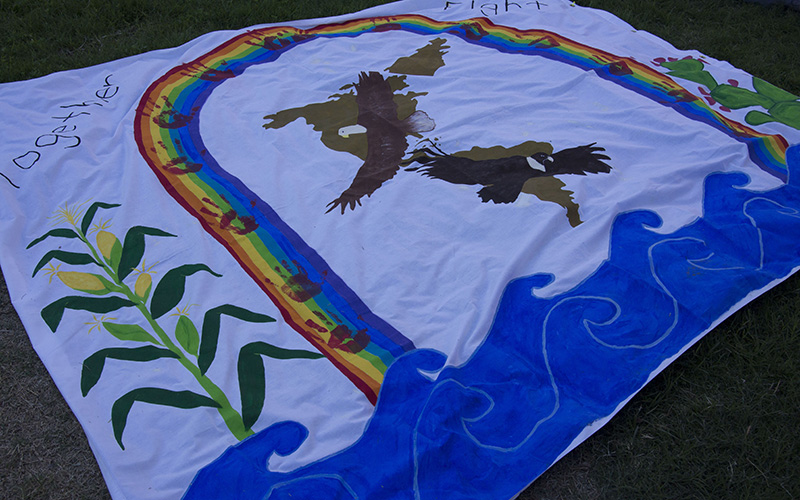 Artwork lay around the protest area outside of the U.S. Army Corps of Engineers office in downtown Phoenix. (Photo by Bri Cossavella/Cronkite News)

The protest in central Phoenix was among other planned, daylong protests across the country, including Flagstaff, Tucson, Prescott and Sierra Vista. Organizers had billed the connected protest as a “National Day of Action.”

Members of the Standing Rock Sioux Tribe and other opponents of the pipeline have been protesting in North Dakota for months, attempting to block construction of the pipeline that would travel through North and South Dakota, Iowa and Illinois and carry 470,000 barrels of crude oil a day, according to a Cronkite News article.

Tribal members fear the pipeline could destroy a vital water source and sacred land. It would travel under the Missouri River at Lake Oahe — near the reservation, according to a Vox article.

Other opposition arguments are it would increase dependency on fossil fuels, which is believed to contribute to climate change, and continue longstanding government mistreatment of Native Americans, protestors in Phoenix said.

Energy Transfer Partners, the company in charge of the pipeline, said it would allow oil to reach markets in a safer, more cost effective manner instead of using train and truck transportation. It would also benefit the United States by using domestic sources of oil and create thousands of jobs, according to the website.

The U.S. Army Corps of Engineers stated on Monday that construction near the area must be halted. The corps is asking for additional discussion and analysis regarding the tribe’s concerns.

Energy Transfer Partnersreleased statements on Monday and Tuesday denouncing the corps decision. Company officials said the corps already granted them access to build on the land and are now asking for federal court intervention to put an end to all political roadblocks.

Here’s a look at four Arizona protesters who stood with Standing Rock on Tuesday. 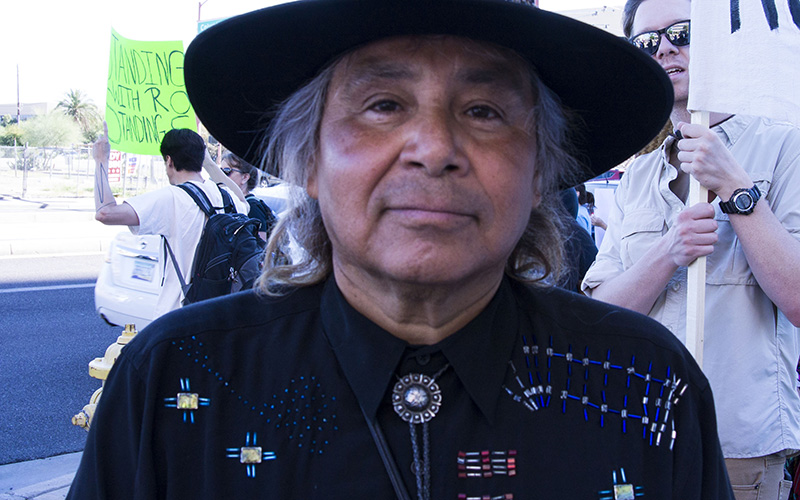 Desert Little Bear, Tempe resident and member of the Pascua Yaqui Tribe
Why he protests: Desert Little Bear said the internet exposes issues to millions of people and keeps social movements strong by giving people a voice.
In his own words: “We can’t destroy the environment to reach for money. It’s only a matter of time before we reach a peak point and start to suffer.”
(Photo by Bri Cossavella/Cronkite News) 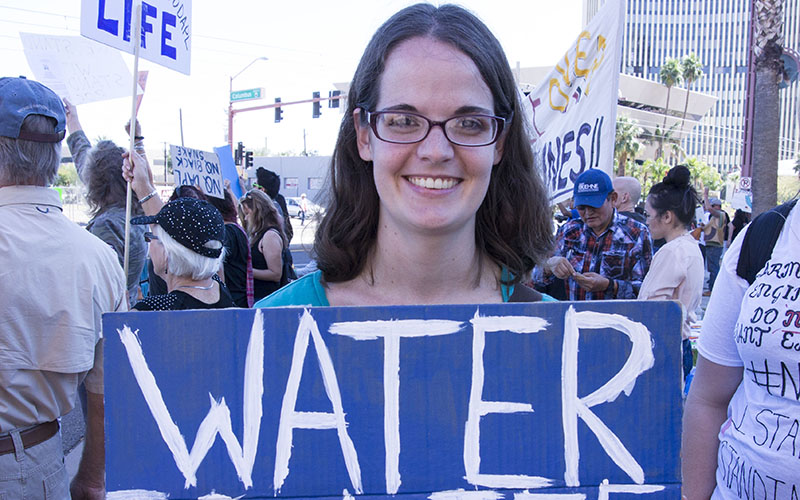 April Hall, Mesa resident
Why she protests: Hall wanted to join the ongoing protest in North Dakota but didn’t have the resources. When she found out about the national protest day, she decided to organize the Phoenix protest outside the U.S. Army Corps of Engineers office in downtown Phoenix on Tuesday.
In her own words: “I’m standing up for the human rights that have been violated and want indigenous people to be recognized for who they are,” she said.
(Photo by Bri Cossavella/Cronkite News) 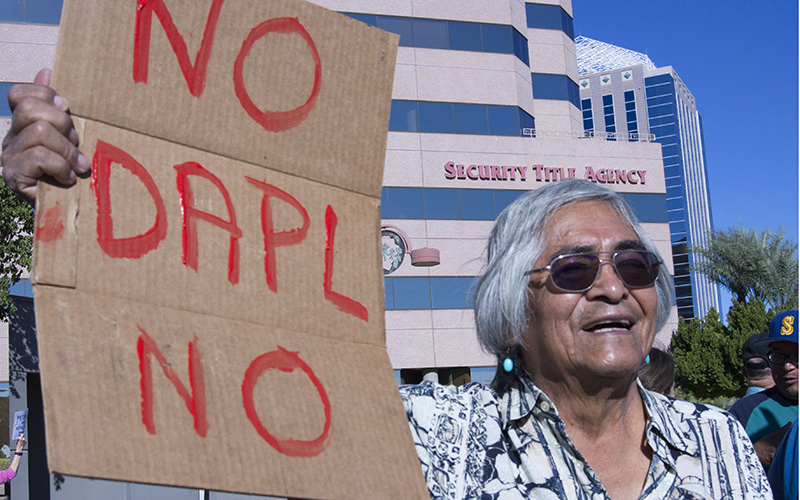 Simon Ortiz,Tempe, English professor focusing on American Indian studies, Arizona State University
Why he protests: Simon Ortiz gathered protesters to pray, saying the issue should be everyone’s concern because an oil corporation is threatening the water everyone needs to survive.
In his own words: “This prayer and this moment and this demonstration for resistance is on behalf of what we hold and know to be precious.” (Photo by Bri Cossavella/Cronkite News) 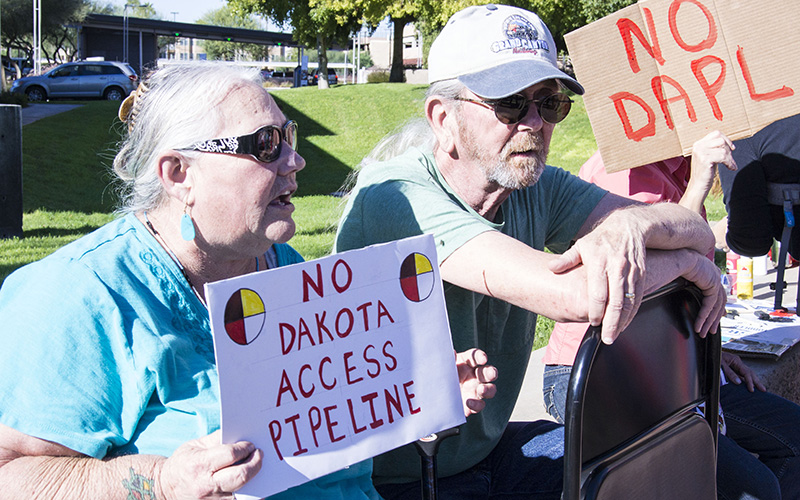 Judy Kessler, Gilbert, formerly of the Pine Ridge Indian Reservation, South Dakota
Why they protest: Judy and Lyndon Kessler, wife and husband, sing a Sundance Song with lyrics that translate to, “The water is sacred. The water is sacred.” Kessler said she couldn’t bear remaining silent.
In her own words: “To sit on the sidelines is to sit with the oppressor.”
(Photo by Bri Cossavella/Cronkite News)