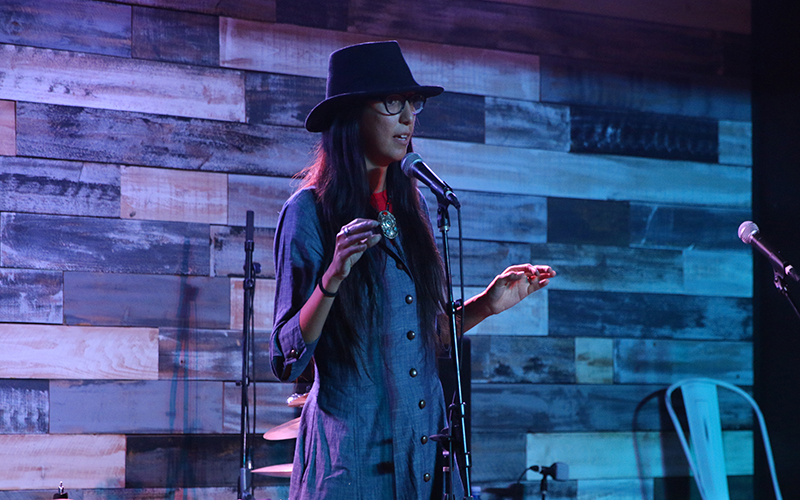 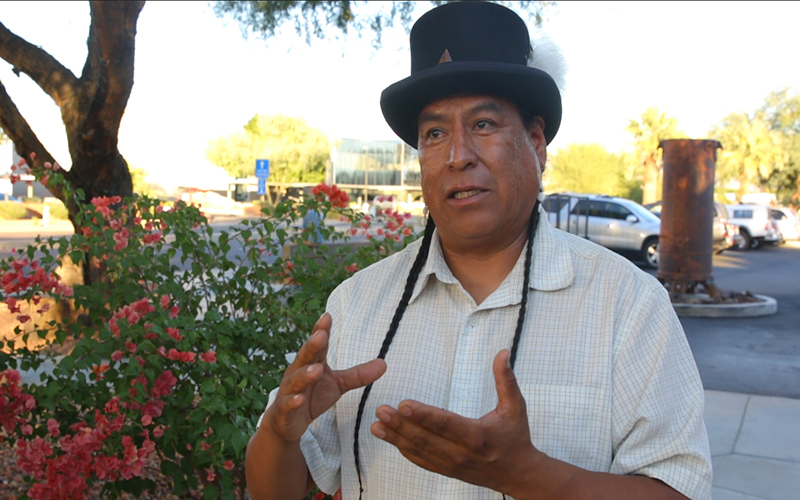 Sam Anderson discussed the sacredness of water after giving the opening prayer at the Stand ’N Rock concert. The concert raised funds to benefit protesters of the Standing Rock Pipeline. (Photo by Andres Guerra Luz/Cronkite News)

SCOTTSDALE – According to the Navajo teachings Sam Anderson learned as a child, water is sacred.

Anderson spoke Sunday at a Scottsdale benefit concert intended to aid Arizonans protesting the Dakota Access Pipeline. About 50 people paid $18 each to attend the concert, where live performers played music beneath a blue light that shined on the stage like water.

Performances ranged from tribal singers chanting against the pounding of a drum to inclusive music acts where members of the audience rose from their chairs to dance in front of the stage.

The “Stand ‘N Rock” concert was part of a larger movement within indigenous and non-indigenous communities to recognize environmental issues as a priority in the wake of President-elect Donald Trump’s campaign promises to decrease environmental regulations.

Earlier this year, protesters set up camp and blocked construction of the proposed pipeline, intended to carry oil through four states – North Dakota, South Dakota, Iowa and Illinois. The pipeline was intended to cross beneath the Missouri River, but after protests began the Army Corps of Engineers blocked construction pending review of already approved plans, according to the New York Times.

Energy Transfer Partners, the company that owns the Dakota Access subsidiary in charge of the pipeline, said on their website that the pipeline will bring approximately 470,000 barrels of oil per day from production areas in North Dakota to Illinois.

The company did not return several phone calls seeking comment for this story, but its website says one of the pipeline’s expected benefits is greater energy independence through more domestic production of crude oil. The pipeline will also utilize “new advanced pipeline technology” to make the pipeline safer and more reliable.

But protesters at the actual site in North Dakota and those attending Sunday’s concert both worry that the pipeline furthers the nation’s dependency on fossil fuels, which triggers climate change. What’s more, they say, there’s no guarantee the pipeline won’t break beneath the river, causing oil spills.

“All of us have come together to try and create a cohesive unit of Arizonans who are actually feeding into the supply list and the funds of the Arizona campers out at Standing Rock” said Mariana Riley, who planned and performed at the event at BLK Live restaurant in Scottsdale.

The money raised at the event, she said, will be used to set up a permanent camp of Arizonans at the Standing Rock protest site in North Dakota. The Arizonans will allocate donations from Arizona to protesters on the front lines, she said.

Phoenix resident Ariana Hill, 32, attended Sunday’s benefit concert and said the event was “about creating that space of prayer” where the community could send good energy to the earth and Standing Rock.

Hill said she is of Mexican, Spanish and Mescalero Apache heritage. Her appreciation for water formed while she was growing up in New Mexico in an area where the water wasn’t drinkable from the tap, she said.

“It hurts our heart to see that.”

“It’s in all living things,” Anderson said in an interview after his performance and opening prayer.

“We are part of the water.”