David Kerr, who sold his dairy farm more than a decade ago, still has vestiges of the operation behind his Buckeye home. (Photo by Kristiana Faddoul/Cronkite News)

The generational differences demonstrate the changing nature of farms in Arizona, where the number of farms has grown over the last decade but available land and the size of farms is shrinking.

David Kerr said the economy changed in the early 2000’s, bringing more retail and housing development and pushing farms to the fringes of urban areas. He could have expanded to make more money, but couldn’t afford to do so. So he took another route.

“I sold my dairy in 2003, and have been in charge of Kerr Farm Tours for the last 12 years,” said Kerr, who works in the wheat industry. The program, which includes farm equipment and livestock such as cows, pigs, goats, is an exhibit at the Arizona State Fair.

A dilapidated, abandoned dairy farm now sits in a dirt field behind his home, reminding him of financial difficulties. The average market value of agriculture products sold at Arizona farms dropped nearly 60 percent over 15 years, according to the USDA Census of Agriculture.

Kerr said there’s a byproduct of the loss in farmland: children are less likely to be familiar with Arizona’s rich agricultural history.

“What we’ve noticed over the years with the farm tours is that the older generations come by and all of them will respond, ‘Oh, I remember that John Deere tractor because my grandfather had a farm,’ ” David Kerr said.

“We have generations of children now that don’t have that anymore, and it is very important for them to know where their food comes from and what these animals look like,” he said.

Farmland data over the decades

David Kerr’s exit out of farming came years after his oldest brother, Jerry Kerr, sold out of the dairy industry two decades ago.

“I had a dairy farm about a mile from here, and I had about 200 cows,” Jerry Kerr said. “Which really wasn’t enough, but it raised a family and provided a living for us.”

When it came time to expand or sell out, Jerry Kerr did what was best for his farm and his family.

He has another agricultural job, as field supervisor for the Arizona Cotton Research and Protection Council. It gives him another perch to view the Arizona farming industry.

“There is definitely a decrease in farmland,” Jerry Kerr said. “A lot of it is lost farmland to residential areas and water problems.”

“When I started with the organization I’m with now, there were almost 300,000 acres of cotton,” he said.

“The sector that I’m in charge of, which is basically from Casa Grande, Central Arizona, and almost to the Colorado River; this year I had 43,000 (acres),” he said.

Jerry Kerr witnessed the decline firsthand throughout his 20 years in the cotton industry.

“There’s three cotton gins left in Arizona now, and there were, when things were booming, probably 30,” he said.

Wes Kerr, a fourth-generation farmer and co-owner of Kerr Family Dairy, sees the upside to the situation that bedevils his uncles.

“Farmland is decreasing overall, and that is a really good thing,” he said.

In 2007, most Maricopa County farms were less than ten acres, according to the Arizona Farm Bureau’s website.

“In Arizona today there are about 65 families that still dairy farm, where maybe about 30 years ago there were close to 400,” Wes Kerr said.

“We are able to grow food with less land and less water,” Wes Kerr said. “The way we do that is by embracing technology.”

“Each cow produces about 75 pounds of milk per day,” he said. 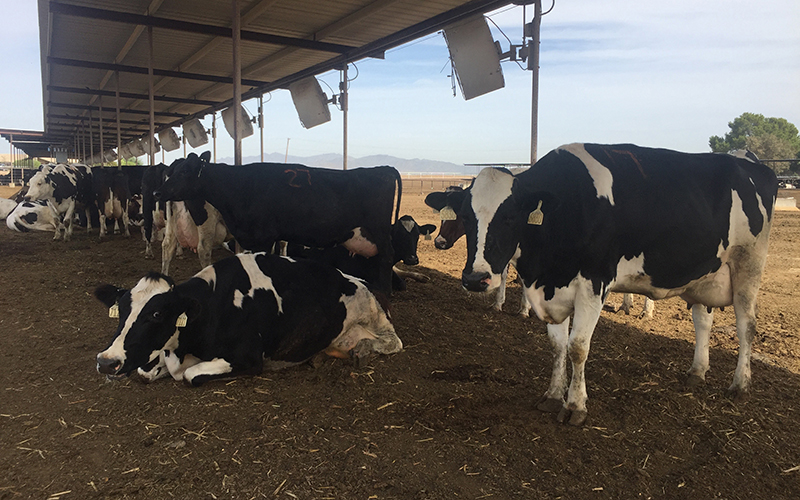 U.S. dairy industries produce more milk today with only one third the number of cows seen decades ago, he said.

Farmers migrate to other industries

The rise of technology in farming has also led to job loss, forcing workers to migrate into related or separate industries.

“The most developed cultures around the world have small agricultural sectors,” Wes Kerr said. “Those sectors are exceedingly productive, and only require a small percent of their population to grow food.”

“I’ve had good friends of mine major in animal science,” he said. “Now they are nutritionists or veterinarians or other specialists to help with the farming community, but not actually own the farm or be a farmer, per se.”

Jerry and David Kerr may have different views from their nephew, Wes, on changes in the farming industry. But the family agrees that farming culture is in their DNA.

“The new generation of farmer we have now is more educated and more knowledgeable, but the person that still farms today is the same person that farmed 40 years ago,” David Kerr said. “That hasn’t changed, and I don’t think it will.”