Syrian families at a United Nations refugees center in Lebanon in 2014. Arizona received 833 Syrian refugees in just-ended fiscal 2016, trailing only three other states in the nation that year. (Photo by Mohamed Azakir/World Bank) 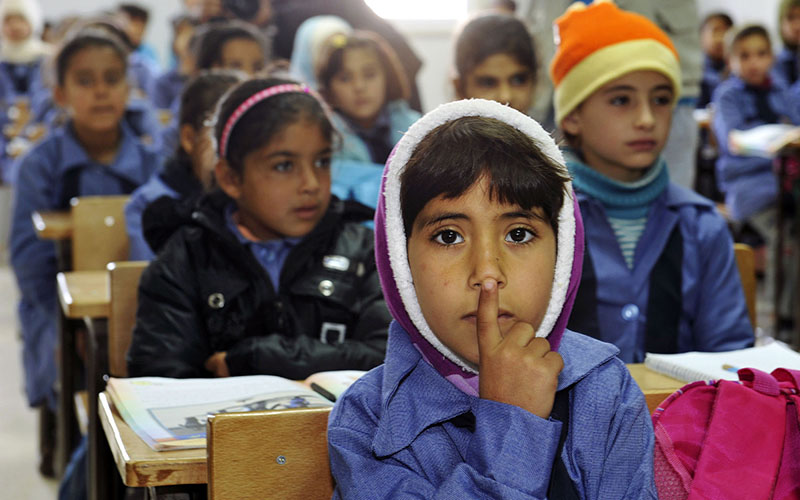 Displaced Syrian children in a classroom at a Jordanian refugee camp in January 2012. Camps like this housed tens of thousands of refugees fleeing war in Syria. (Photo by Mark Garten/United Nations)

WASHINGTON – At least 800 Syrian refugees were resettled in Arizona over the last year, more refugees than all but three states in the nation, according to the most recent data from the State Department’s Refugee Processing Center.

Arizona trailed only California, Michigan and Texas in the number of Syrians relocated in the past year, when President Barack Obama set of goal of accepting 10,000 refugees from the war-torn country – a goal that ended up being exceeded by about 2,500 refugees, the administration announced in September.

The announcement came as Obama unveiled plans to accept even more refugees – from Syria and the rest of the world – in the fiscal year that started this month. The president last year raised the cap on refugees admitted to the U.S. from 60,000 to 85,000, and during a United Nations address last month he committed the country to taking 110,000 in fiscal 2017.

The goal for Syrians last year was unusual – refugee targets are typically set by region, not nationality – and State Department officials said there is no specific goal for Syrians in the coming year. But it is safe to assume that refugees from that country will be a priority, one official said.

“This administration has been very clear that we want to bring more Syrians, so my own guidance to our staff is that we want to bring even more than we brought this year, without having a target,” said Anne Richard, assistant secretary of the Bureau of Population, Refugees and Migration, according to a transcript of a Sept. 27 State Department briefing.

Aid organizations in Arizona said they are not concerned by the possibility of more refugees this year. The state is historically a top destination for refugees because of its midsize communities with a lower cost of living, said Betsy Fisher, policy director at the International Refugee Assistance Project at the Urban Justice Center.

The biggest problem with the resettlement of the Syrians who came last year, one advocate said, was that they all came toward the end of the fiscal year.

“It’s certainly been a very busy summer because of the increased arrivals,” said Connie Phillips, CEO and president of Lutheran Social Services of the Southwest, which runs the program Refugee Focus.

“It took a while for the vetting process to occur and for people to be ready to be processed,” she said. “So instead of going throughout the year, it kind of bunched up all at once.”

That two-step vetting process, which can take up to three years, is key to the administration’s defense of its decision to admit more refugees – and key to critics, who say the process is not refined enough to keep potential terrorists from slipping into this country.

Gov. Doug Ducey last year joined 29 other governors who called for a halt to Syrian refugee resettlement, citing fears that a potential terrorist might slip through the process. And Rep. Paul Gosar, R-Prescott, among others, said this year that law enforcement agencies “do not have the necessary on-the-ground intelligence to thoroughly vet refugees” and that the inflow would strain the U.S. budget.

Neither Gosar nor Ducey responded to repeated requests for comments on the current state of the resettlement program. But security fears were raised again at a Senate Judiciary subcommittee hearing in late September, when Sen. Chuck Grassley, R-Iowa, said that even if refugees are vetted, the government has a hard time keeping track of them once they’re in this country.

“Time and again, we see refugees returning to their country for various reasons, even though they claim that they will be persecuted if they go back,” Grassley said. That leads him to “questioning whether they entered the country or not based upon the principles of our refugee program.”

But administration officials fired back at that hearing that there has not been a single refugee admitted without the proper vetting process.

“If there are particular countries of concern, Syria is obviously one of them … those vetting requirements are heightened yet,” said Leon Rodriguez, director of U.S. Citizenship and Immigration Services. “There are additional steps we take in those cases. But there are not people who are not vetted.”

Phillips said that residents in Arizona may think the refugee resettlement process is akin to immigration, but she said it is vastly more complex.

Applicants must first be granted refugee status by the U.N., which decides which country the refugee can apply to. Applicants to the U.S. undergo background checks, repeated interviews, health checks and more, in a process that takes months, if not years before they are approved for resettlement to a city that is determined for them.

Fisher said advocates welcome the higher refugee goal set by the president, and she hopes the U.S. will continue to expand resettlement programs.

“Refugees in particular are a really crucial expression of our humanitarian commitment to people fleeing persecution,” she said.