A Syrian refugee family waits to hear its fate in Beirut, Lebanon, in this January 2014 photo. Syria was one of 42 countries whose refugeees have resettled in Arizona in the past several years. (Photo by Mohamed Azakir/World Bank) 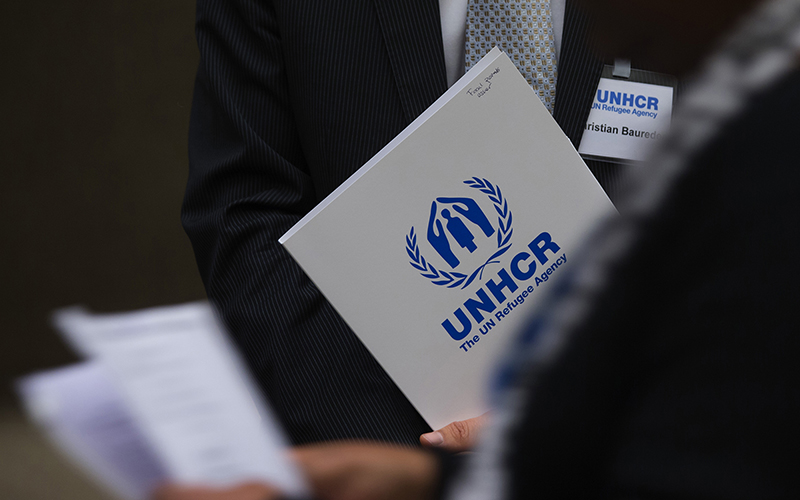 Critics of resettling refugees say they pose a security threat to the U.S., but advocates say that refugees face years of checks, by both U.N. and U.S. officials, before they are let into the country. (Photo by Eric Bridiers/UN Mission Geneva)

WASHINGTON – They come from Somalia and Myanmar, the Congo and Bhutan and Vietnam – and they all end up in Arizona.

More than 15,400 refugees from 42 different countries were resettled in Arizona from fiscal 2012 through the just-ended fiscal 2016, according to the State Department’s Refugee Processing Center. That made Arizona, the 14th-most-populous state in the nation, the fourth-largest recipient of resettled refugees during that period.

Advocates say there are several factors that combine to make the state a welcome landing place for people fleeing their home countries.

“When you look at states with midsize communities that have a lower cost of living, many communities in Arizona fall in that pattern,” said Betsy Fisher, policy director at the International Refugee Assistance Project at the Urban Justice Center.

Arizona took in more Syrian refugees than most states, as U.S. seeks more

Iraq and Somalia sent the most refugees to Arizona in that period, with more than 2,000 each, followed by the Democratic Republic of Congo, Myanmar and Syria, according to the State Department’s data. A number of countries, including North Korea, South Africa and Senegal, sent just one refugee during the period.

“Only 1 percent of all refugees are resettled to another country,” said Connie Phillips, CEO and president of Lutheran Social Services of the Southwest, which runs the program Refugee Focus.

Getting to the U.S. is not the last of the challenges for refugees, aid workers say. Phillips said faith-based and community groups collaborate with aid organizations and the government to help newcomers adjust to their new world.

“To help provide the items the families need, to set up their apartment, to walk beside them the first few weeks they are getting acclimated to American culture, they are taking English classes, job skills training,” Phillips said.

She said hers and other aid organizations in Arizona have gotten very busy since May.

“We always need help,” Phillips said. “We still need more people to provide the items we need, as well as to come in and help with the families.”

Fisher also noted the difficulties of adjusting to a new country after fleeing a war-torn country. She said one of the biggest challenges refugees face when they are finally resettled is the very short amount of time they are given before they are expected to be independent.

“Society requires individuals to get on their feet very quickly. which can be challenging especially for those that have experienced trauma or have lower levels of education,” Fisher said.

Critics of refugee resettlement worry that the U.S. could be opening itself to the possibility of unknowingly admitting terrorists among the large numbers of refugees who come to this country. But advocates maintain that taking in refugees is about “fairness and being aware of the fact that these are people that are fleeing violence.”

“What we need to focus on is that this is really about treating others how you would like to be treated,” Phillips said.

“If the situation were reversed and we needed someplace safe to go, if our country was undergoing horrible violence, if our families, our children were being threatened, we would want someone to help us,” she said.