Maricopa County Sheriff Joe Arpaio speaks with reporters at the Arizona Republican Party headquarters on Aug. 30 after learning of his victory in the Republican primary. (Photo by Bri Cossavella/Cronkite News)

According to the poll, 45.9 percent of registered voters in Maricopa County say they plan to vote for Penzone compared to the 31.1 percent who say they’ll vote for Arpaio.

This was consistent with the favorability ratings Arpaio received in an earlier poll released in August. The poll reported that 57.3 percent of registered voters in Maricopa county either found Arpaio “unfavorable” or “very unfavorable.”

Arpaio, reached by phone on Wednesday, said he couldn’t comment on the most recent poll because he hadn’t seen it.

Arpaio’s campaign manager, Chad Willems, said the poll isn’t a true reflection of the Maricopa County electorate because poll respondents included two and half times as many Democrats as Republicans.

“[It] doesn’t make any sense whatsoever to anybody who knows anything about politics and campaigns in Maricopa County,” Willems said.

“It is so screwed up it’s not worth the paper it’s printed on, with all due respect,” he said, adding that Arpaio will win re-election by a “landslide.”

The poll, a partnership between The Arizona Republic, the Morrison Institute for Public Policy and Cronkite News was conducted by Behavior Research Center using live phone calls to landlines and cellphones and delivered in English or Spanish. The results were weighted using the demographics of the county. The margin of error on the sheriff’s race is plus or minus 5.6 percentage points.

Morrison Institute for Public Policy Senior Research Fellow Eric Hedberg, the methodologist for the poll, said because the poll involved calling people on the registered voting list to get their responses, the sample depended on who picked up their landline phones or cell phones.

Arpaio, 84, is seeking a seventh term as sheriff of Arizona’s most populous county. His upcoming federal criminal contempt of court trial stems from a 2007 racial profiling case. 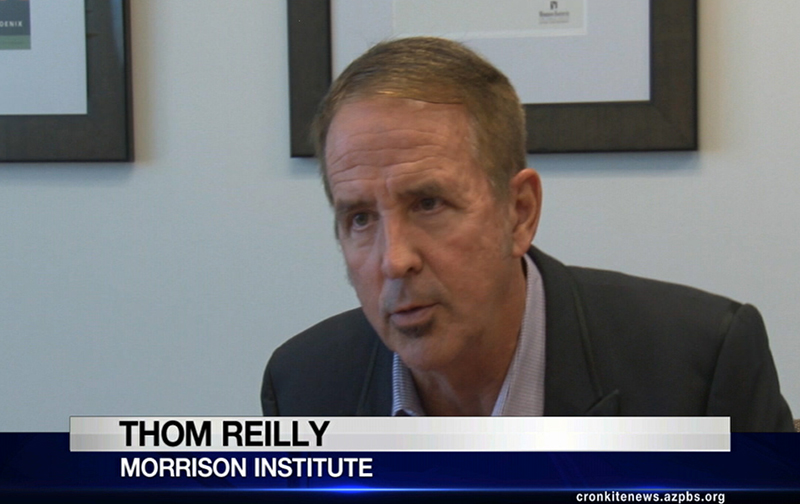 Danny Ortega, 65, a civil rights attorney in Phoenix, said he has seen other polls that have put Penzone ahead, but the lead in this poll is the biggest one he’s seen so far. But 20.4 percent of Maricopa registered voters say they are undecided.

Ortega said the poll shows Arpaio will likely not be re-elected, and Maricopa County residents will “get rid of the nightmare Sheriff Arpaio has created for this county.”

Maricopa County and Arizona registered voters gave similar responses toward the idea of deporting all undocumented immigrants – 30.8 percent of county voters strongly disagree with mass deportation, while 41.7 percent disagree, the poll says. Statewide, 29.2 percent of registered voters strongly disagree that the undocumented should be deported, while 39 percent disagree. The margin of error for those two questions is plus or minus 5.9 percentage points.