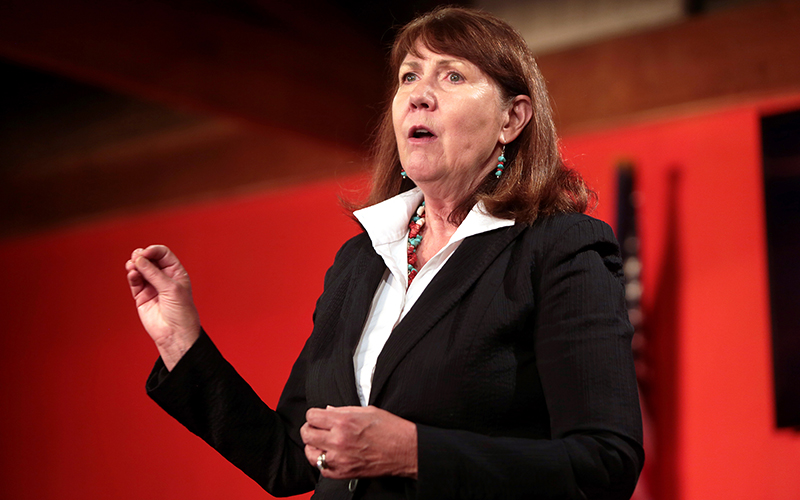 The statewide telephone poll of registered voters, taken from Oct. 10-15, gave McCain 51.5 percent of registered voters to the 40 percent who said they would vote for Kirkpatrick. That portion of the survey had a margin of error of plus or minus 3.7 percentage points.

Despite an apparently comfortable lead for the incumbent, Kirkpatrick campaign spokesman D.B. Mitchell said the numbers show the race is “tightening because Arizonans are fed up with John McCain’s self-serving doublespeak.”

“His message of more broken government in Washington is as dangerous as his repeated support of (GOP presidential nominee Donald) Trump,” Mitchell said in an emailed statement. “Arizonans are ready to vote for new, principled leadership and send Ann Kirkpatrick to the Senate.”

But Jason Rose, a political consultant at the Scottsdale public relations firm Rose+Moser+Allyn, said the poll shows too big a gap for Kirkpatrick to close in the three weeks left until the election.

“With McCain up double digits this close to Election Day, if the fat lady isn’t already singing, she’s warming up her chords,” Rose said. “With these polling results today, it’s as close to a lock as you’re going to find.”

The poll comes as Democratic nominee Hillary Clinton announced plans to pump $2 million into advertising in the state, where party heavy-hitters were scheduled to campaign this week: Vermont Sen. Bernie Sanders on Tuesday, Chelsea Clinton on Wednesday and first lady Michelle Obama on Thursday.

The Clinton campaign is making similar efforts in other states that are not normally in play for Democrats, but said part of the interest in Arizona was in helping Kirkpatrick and Democrats in the 1st and 2nd District U.S. House races.

The poll was taken in the week after McCain withdrew his support for Trump, after a vulgar 2005 video surfaced in which the GOP presidential nominee bragged about sexually assaulting women.

Kirkpatrick, who made McCain’s support of Trump a central issue in her campaign, hammered the senator during their only debate in the race Oct. 10 for waiting so long to rebuke his party’s presidential nominee.

“McCain is able to withstand waves – big waves,” Rose said of the decision to withdraw support for Trump. “The polling results showed that his independence is the reason for his rise to the top.”

“With polls in the double digits and going against a legend like John McCain, national money and resources won’t come down to support her in this final blow,” Rose said.

Geoffrey Skelley, a political analyst at the University of Virginia Center for Politics, said the Arizona Senate race has been “rated ‘Likely Republican’ for a bit” by Larry Sabato’s Crystal Ball, the center’s campaign analysis arm.

“It looked like Kirkpatrick gained some headway in the summer. Some polls had it as a close race, but his poll numbers improved after the primary,” Skelley said.

In the August primary, McCain beat former state Sen. Kelli Ward by a 51.2 to 39.9 percent margin.

McCain served two terms in the House before being elected to the Senate in 1986, beating Democrat Richard Kimball by 180,885 votes. That was the closest margin in his five successful Senate campaigns.

“As the race stands, I don’t think he’ll worry all that much about it being a close race,” Skelley said. “He’s clearly positioned to run ahead of Trump by a decent margin. It looks like Arizona will be close at the presidential level, but it won’t be that close at the Senate race.”

Kirkpatrick’s supporters cite other polls that show the race much tighter. They also point to her fundraising as evidence of her support, with the campaign announcing earlier this month that she had raised $3 million in the third quarter of this year.

But she has still been outraised by McCain, who reported raising $11.3 million for this campaign with $4.6 million in cash on hand as of Sept. 30.

McCain spokeswoman Lorna Romero said in a statement that the poll is another indicator that the “momentum is clearly on our side.”

“Arizonans appreciate John McCain’s independent conservative leadership, and know he’s got the experience and character to best represent our state in Washington, D.C.,” Romero said in an emailed statement.