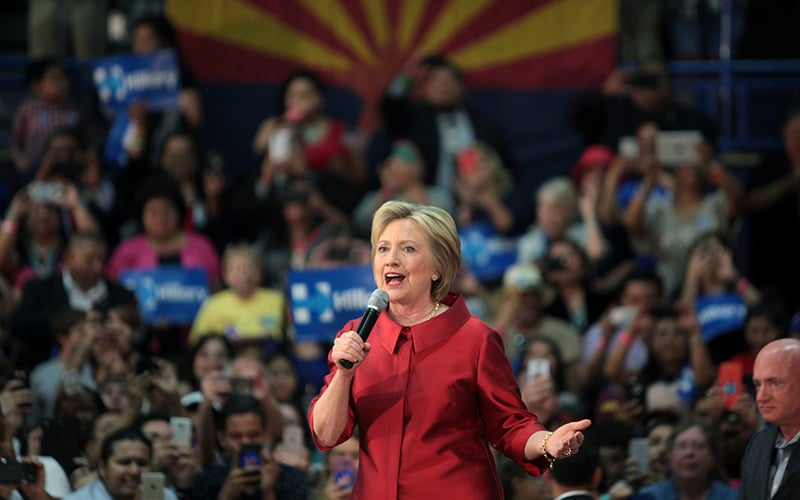 Hillary Clinton speaks with supporters at a campaign rally at Carl Hayden High School in Phoenix on March 21, 2016. (Photo by Gage Skidmore via Creative Commons)

In the statewide poll of 713 likely voters, 39 percent said they plan to vote for Clinton, while 33.9 said they plan to vote for Trump. Undecided voters make up 20.7 percent of likely voters — down just 2.2 percentage points from the Arizona Republic/Morrison/Cronkite News Poll in August. Early voting has already begun in the state. Libertarian nominee Gary Johnson holds support from 5.9 percent of likely voters, while Green Party nominee Jill Stein is at 0.5 percent. The question has a margin of error of plus or minus 4.3 percentage points.

When undecided respondents were asked whom they were leaning toward, Clinton received 43.3 percent support of all likely voters, with Trump trailing with 37.8 percent support. The question has a margin of error of plus or minus 4.0 percentage points.

“Now we’re seeing a shift back to Arizona becoming more blue, more moderate Republicans, a more older population that’s being phased out, if you will, by younger voters and more active voters,” said Mario Diaz, a Democratic political strategist and president of Mario E. Diaz & Associates, a public affairs firm.

“We built a pretty good, strong network and we’re going to continue to do that,” said Arizona Republican Party executive director Avinash Iragavarapu. “We want to tell people what the Republican party has to offer, what Mr. Trump has to offer whereas Hillary Clinton is all about lies and just trying to dig up the past and distracting from what should be the discussion: that is, the future of the U.S.”

The poll also found that Sen. John McCain leads opponent Rep. Ann Kirkpatrick by 11.5 percentage points: 51.5 percent of respondents in the poll said they plan to vote for McCain for senate, while 40 percent said they plan to vote for Kirkpatrick. McCain was found to be very favorable or favorable by 50.4 percent of respondents, up slightly from 48.8 percent in August.

The surge in support for Clinton comes after the Cronkite News poll conducted in August put the two candidates within the margin of error, with 35.1 percent supporting Clinton and 33.9 percent supporting Trump. A lot has happened over the past two months including two debates, leaked video showing the Republican nominee making questionable comments about women and new Wikileaks revelations about the Democratic nominee.

The results come as Clinton’s team steps up her campaign efforts in Arizona, a sign that the operation might see a potential historic victory in the traditionally red state. Bill Clinton is the only Democrat to win Arizona (1996) since Harry Truman carried the state in 1948. Voters have also chosen a number of Democratic governors in the past 50 years, including Janet Napolitano, Rose Mofford and Raul Castro.

“I think you have an exceptionally unpopular Republican candidate here who has offended a number of groups,” David Berman, a political scientist and senior research fellow at the Morrison Institute for Public Policy, said. “If the turnout holds of young people and of course, Hispanics … that’s going to help Clinton.”

This week, Clinton’s campaign manager Robby Mook said $2 million would be pumped into campaigning efforts within Arizona. On Tuesday, Bernie Sanders made stops in Flagstaff and Tucson on behalf of the campaign, Chelsea Clinton is scheduled to appear in Tempe on Wednesday and First Lady Michelle Obama is scheduled to be at a rally hosted by the Arizona Democratic Party on Thursday. Clinton herself made an appearance in Phoenix in March at Carl Hayden High School.

“The Clinton campaign’s investment in Arizona will portray the positive of the campaign: why Hillary Clinton is the best candidate, and that message I think will sway those undecided voters to move on to the Clinton campaign,” Luis Heredia, a Democratic National Committeeman based in Arizona, said.

The Morrison Institute contracted with Behavior Research Center to conduct the poll from October 10-15. Using up-to-date voter registration lists, almost 1,200 live landline and cellphone calls were used to obtain an average of 800 valid responses from likely voters per question. The interviews were performed in English or Spanish. The margin of error fluctuates by question between plus or minus 3 to 4.3 percentage points.

The poll also looked at whether the presidential debates influenced likely voters. The majority — 67.1 percent — said the debates did not influence them. However, 16.5 percent of those influenced favor Clinton while 9.2 percent favor Trump. The third and final debate is this Wednesday, at 6 p.m. MST.

Trump has stopped in Arizona six times during this campaign. At a Prescott Valley rally earlier this month, he told supporters “We are going to win back the White House.”

“We’ve built enormous victory operations,” he said, referring to offices set up throughout the state to rally together a Republican base. “So, I do not see there is any way the Democrats could even come closer.”

“I think it still indicates that there’s a large section of the electorate that can be swayed either way,” said Thom Reilly, the director of The Morrison Institute for Public Policy, the organization that conducted the poll.

Clinton holds an advantage among women: 38.6 percent said they are planning to vote for the Democrat, while 31.5 said they support Trump. This statistic seems to have held steady since August, when 32 percent said they were planning to vote for Trump and 40.1 percent answered Clinton. In October, experts wondered if the Republican would lose support from women after a video surfaced of the candidate talking about groping and kissing women.

“This election could really help Democrats: the presidential election and the down ballots,” Diaz said.

President Barack Obama is seeing a small spike in favorability statewide: 55.5 percent said they found the commander-in-chief to be very favorable or favorable — that same number was at 50.7 in August.

Though the results look promising for Clinton, Douglas Cole, the senior vice president of HighGround Public Affairs Consultants, a political strategy firm based in Phoenix, said that the state is not a done deal for the Democrat.

“We’re in the first week of early voting. Every day is election day now in Arizona… Everyone’s got a loaded gun, as we say in the business.”