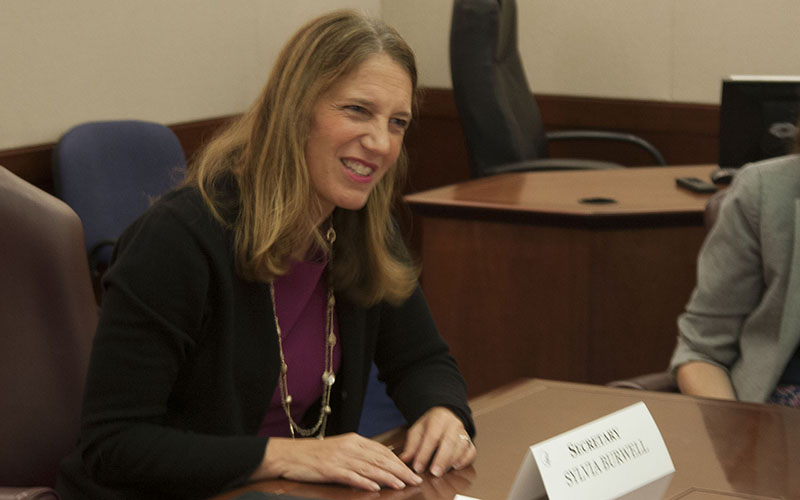 Health and Human Services Secretary Sylvia Burwell conceded there are still problems with implementation of health marketplaces, but said her department continues to work on them. (Photo by Allie Bice/Cronkite News) 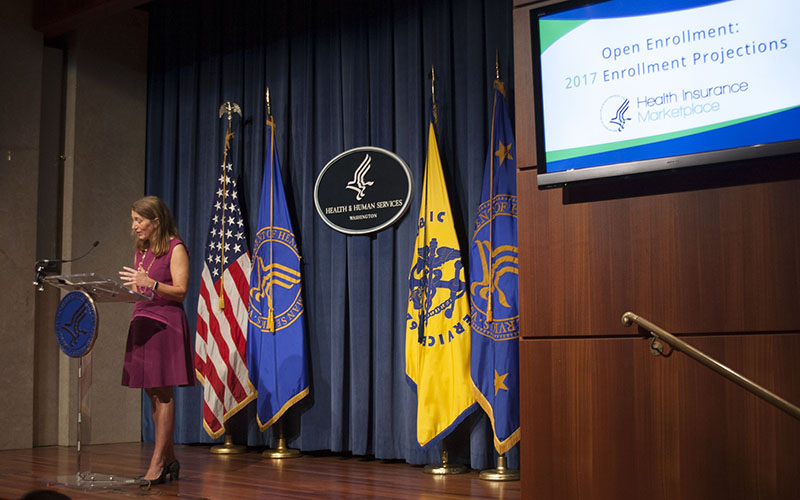 Health and Human Services Secretary Sylvia Burwell estimated that 13.8 million people will sign up for health insurance in the next round of Obamacare that starts Nov. 1. (Photo by Allie Bice/Cronkite News)

WASHINGTON – Health and Human Services Secretary Sylvia Burwell predicted Wednesday that 13.8 million people will sign up for Obamacare when open enrollment begins Nov. 1, even though they will face fewer options and higher premiums in states like Arizona.

Burwell’s comments come as regulators in Arizona approved premium increases ranging from 51 to 74.5 percent for the two insurers left in the state’s healthcare marketplace – all the others have backed out, leaving most state residents just one insurer to deal with.

Filings with the Arizona Department of Insurance show that customers of Health Net of Arizona Inc., the only insurer for the 126,000 Maricopa County residents enrolled in Obamacare, could see a 74.5 percent premium increase, depending on their plan.

Blue Cross Blue Shield of Arizona clients can expect average rate increases up to 51.17 percent next year. Blue Cross will be the sole insurer in every other county except Pima, which will have both Blue Cross and Centene – a successor to Health Net of Arizona – offering plans.

The combination of higher costs and fewer choices “could discourage enrollment” in policies under the Affordable Care Act, or Obamacare, health policy experts said.

Cynthia Cox, associate director of health reform and private insurance at the Kaiser Family Foundation, said Arizona is in “an unusual situation, in terms of the magnitude of the insurer exits and the premium increases.”

“It’s not alone, there are other states where this will be happening,” Cox said. “But in a lot of the other parts of the country probably most people will have a choice of multiple insurers.”

Burwell acknowledged Wednesday that although there have been challenges with Affordable Care Act, there has been also been “progress on all the fronts” since the law’s enactment. She said this shakeout in the markets was not unexpected, as insurers react to losses in early years of the law.

“Building a new market is never easy and as I’ve said before we expect this to be a transition period for the marketplace,” Burwell said Wednesday.

Despite the challenges, she said her department is projecting that enrollment through the health exchange will reach 13.8 million people this year, an increase of 1.1 million from the number currently enrolled.

Burwell said the administration hopes to continue working with “partners across the aisle” to help improve the health care law, adding that “access, affordability, and quality” are top priorities for consumers during open enrollment.

Burwell said the marketplace is still new and will continue to improve, but despite worries, marketplace consumers will “continue to have affordable options available.”

Supporters of Obamacare note that even though premiums are rising, many people who are eligible can also qualify for tax refunds that help offset the cost of their coverage. They also say that, even with just one insurance company, consumers can shop for different levels of coverage to find the best deal for them.

But Cox said that while efforts by HHS may help increase enrollment in Arizona, “It’s particularly challenging to expect significant enrollment growth in parts of the country where premiums are going up and insurers are exiting.”

Sen. John McCain, R-Arizona, on Wednesday called the rate hikes “the tip of the iceberg when it comes to the collapse of Obamacare across the country.”

“Arizona families are demanding affordability, accessibility and choice when it comes to their health care – not the expensive, restrictive and poor quality care that has been forced upon them by Obamacare,” McCain said in a statement released by his office.