Columbus Day is one of 10 federal holidays, but still a work- and schoolday for most Americans. Only 13 percent of businesses give their workers the day off, a recent survey said. (Photo by M Sullivan/Creative Commons) 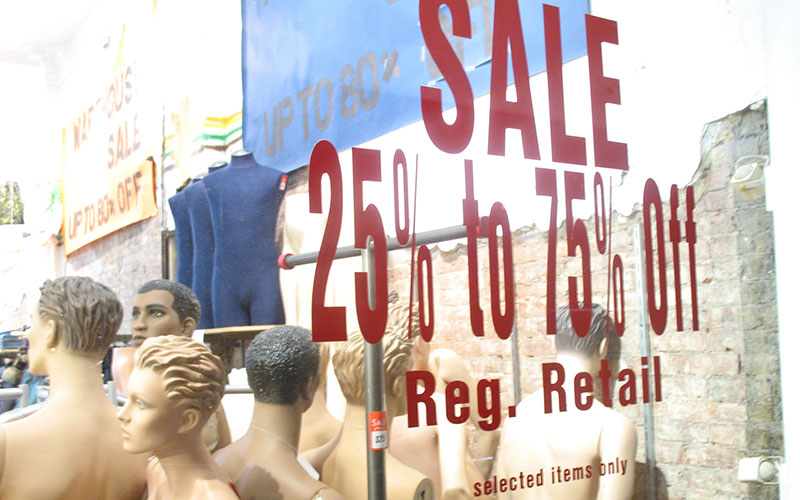 While Columbus Day is a work day for most Americans, it is an opportunity to shop for those who do get the day off and an excuse for sale for retailers. (Photo by consumerist dot com/Creative Commons)

WASHINGTON – While advocacy groups argue about the proper way to honor Christopher Columbus and his legacy, it’s a safe bet that most Americans marked the holiday the same way – by going to work.

Columbus Day is the least-observed of all federal holidays, with just about 13 percent of private-sector offices saying they plan to give workers the day off and 1 percent planning to close early, according to a survey by the Society for Human Resource Management.

Not all federal holidays are created equal. ASociery for Human Resource Management survey of businesses’ plans to observe the days found the percent planning to give a holiday off in 2016 was:

Experts said the reasons many go to school and work on Monday has to do with the law and with different feelings about this particular holiday.

“Some people find a celebration of Columbus Day to be culturally insensitive,” said Paula Brantner, senior adviser at Workplace Fairness. “That’s another reason it’s not at the top of the list of holidays people observe.”

Jerome Froimson, a Phoenix attorney who specializes in labor and employment cases, said most nonessential federal employees will get the day off, mail won’t be delivered and most banks will be closed. But everyone else will likely be at work.

“Holidays are set by various different sources,” Froimson said. “The national holidays are set at the federal level … so federal employees are off on those days.

“As far as private businesses are concerned, in some cases if they’ve got a union contract, holidays are set, but for most it’s what their employer wants to do,” he said.

He and Brantner both said the law does not require private companies to give employees a paid holiday on Columbus Day.

“The Fair Labor Standards Act and wage-and-hour laws that apply to employees across the nation do not require that employers pay for any holiday,” Brantner said.

Schools have the same flexibility, with many holding classes and some taking the day off – but often for other reasons.

“I can tell you that many districts choose to schedule their fall breaks to include Columbus Day, but do not necessarily take it as a separate day off,” said Charles Tack, a spokesman for the Arizona Department of Education.

Hopi schools take the day off for Hopi Senom Day, a time to celebrate tribal history and heritage – not Columbus’ history.

And cultural concerns about Columbus Day led the Phoenix City Council to approve a resolution last week that marks Monday as Indigenous Peoples’ Day, making Phoenix the largest city in the country to do so, according to supporter of the move.

“Most people don’t take off Columbus Day here,” Froimson said. “I think if you get your work done you should get the day off, but it really depends on what kind of work you do.”

While most people would welcome a day off, Brantner said she expects that, given the choice, “some people would rather work on Columbus Day but have a four-day weekend after Thanksgiving.”