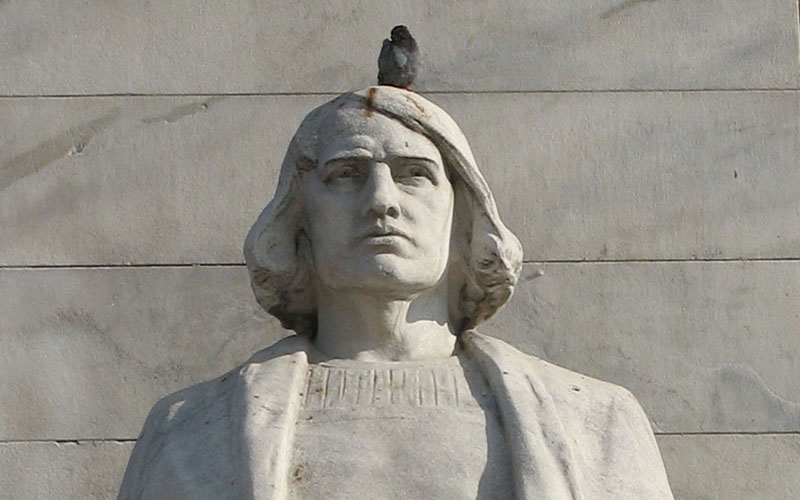 Native Americans were among the first to take issue with the legacy of Christopher Columbus, whose statue outside Washington’s Union Station is shown here. Some ignore the day, some use it to celebrate their own heritage. (Photo by clairegren/Creative Commons)

“I would say most of our young students don’t even know that Columbus Day is a holiday off-reservation,” said Elvira Bitsoi, principal of Wide Ruins Community School, a Navajo school outside Chambers. “Because as a people, we’ve moved on from Columbus.”

Already overlooked in much of the country as a federal holiday that means little more than mattress sales and a three-day weekend, Columbus Day is alternately rejected, reclaimed or renamed by Native Americans and other Americans who see a darker side to the explorer’s legacy.

On the Hopi reservation, for example, Monday will be a holiday – but one that celebrates the history of the tribe and not the Italian explorer. In the city of Phoenix, it will be marked as Indigenous Peoples’ Day after a 9-0 vote Wednesday by the City Council to keep the holiday but acknowledge an overlooked historical narrative.

Telling part of that narrative is the goal of Hopi Senom Day, which the tribe celebrates instead of Columbus Day, said Cecilia Shortman with the Hopi Department of Education.

“It’s a great opportunity to educate students about the Pueblo Revolt of 1680,” Shortman said of the uprising in the late 1600s by indigenous people in what is now New Mexico against Spanish colonizers. The rebellion briefly drove Catholic missionaries out of the region.

“We take this time to reflect back on forced conversion of our ancestors and we have discussions about our Hopi religion and how some people still go to church and can also practice Hopi traditions,” Shortman said.

“All of this history makes us who we are today as people and we use this day to celebrate that,” she said.

Bitsoi said Navajo students’ awareness of their history gives them the confidence “to not even talk about Columbus. They talk more our about language and traditions … because they have a real thirst for learning about who we are as Indian people.”

This does not mean the subject is never discussed in the classroom, she said, just that the students are encouraged not to dwell on the event.

“Just this morning we had a discussion about colonization actually,” she said. “It was purely educational and we teach not only what is in the conventional textbooks, but what our Navajo oral history and traditions tell us about colonization events.”

A previous version of this story gave an incorrect location for the Navajo Nation’s Wide Ruins Community School. The school is located outside the town of Chambers. The story here has been corrected, but clients who used previous versions are asked to run the correction that can be found here.

The Navajo Nation officially supports the movement to focus on Columbus as an exploiter, not just an explorer, said longtime tribal council delegate Elmer Begay. But a recent experience made him realize that changing the name of a day did not need to be a top priority, he said.

“I went to Switzerland … and the people were so interested and respectful of Navajo language, of our culture, of our traditions,” Begay said. “They understood … all the contributions of my people.”

He said his Swiss trip opened his eyes to the fact that the Navajo people are much more important and respected on the international stage than Christopher Columbus.

Begay said when he was a student, he got out of school for Columbus Day but he never fully understood the implications of the holiday. He said he is grateful his children and grandchildren have a fuller understanding of Native history in the United States.

“And a lot of that is thanks to our Navajo education where we can focus on our language and our traditions,” he said. “This wasn’t available to me and so I’m still learning new things about my culture and my language today.”