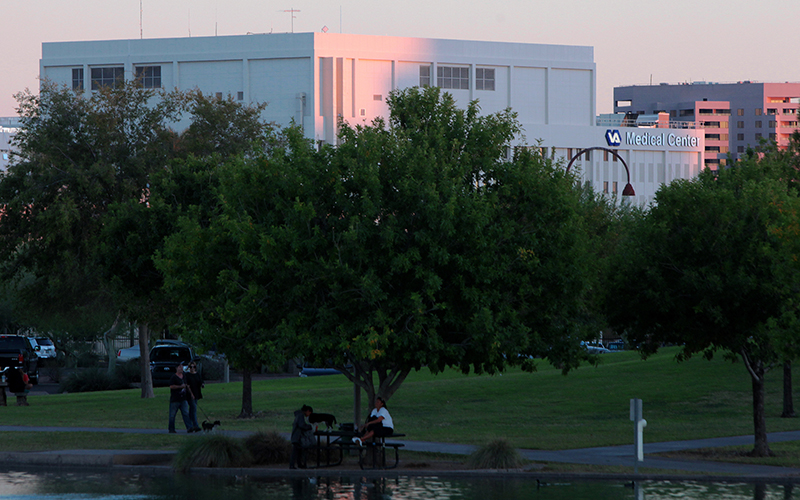 The Phoenix Veterans Affairs hospital, what one lawmaker called “ground zero” for the VA wait-time scandal, continues to be plagued with problems, a new report says. (Photo by Gage Skidmore/Creative Commons)

The report by the VA Office of Inspector General cited persistent problems with delayed care and patient consults at the Phoenix VA Health Care System, with 38,000 appointments still open as of July. That was up from 34,769 open consults as of August 2015 and 32,500 as recently as March.

The inspector general’s report comes just days after Arizona lawmakers questioned the qualifications of the newly appointed director of the Phoenix facility. They seized on Tuesday’s report as evidence “cultural change at the Phoenix VA is still desperately needed.”

“We should all be alarmed that more than two years after the scandal in care first erupted at the Phoenix VA, such reprehensible behavior continues to take place, putting the health of our veterans at risk,” said Republican Sens. John McCain and Jeff Flake in a joint statement Tuesday.

The inspector general’s investigation was sparked by allegations by a “confidential complainant” last summer to the House Veterans Affairs Committee, according to the report. That whistleblower claimed that some patients were waiting more than 300 days to be seen, that workers at the Phoenix facility were improperly canceling patients consults, possibly to hide patient deaths, and that managers gave incomplete or improper directions.

The source also told the committee that veterans had died while waiting to be seen, providing a list of 87 patients who died with 116 open consults.

The inspector general expanded its review to look at records of 215 patients who died while awaiting an appointment, but said it was only able to determine that “untimely care” may have contributed to the death of one of those patients. That particular patient “never received an appointment for a cardiology exam that could have prompted further definitive testing and interventions that could have forestalled his death,” the report found.

It said that workers at the Phoenix facility did “inappropriately” discontinue consults in about one in four of the 309 cases it reviewed. But the report could not confirm a number of the specific allegations about discontinued consults.

In addition to the thousands who were waiting for appointments, the report confirmed that one patient had “waited in excess of 300 days for vascular care.”

The Phoenix VA did not immediately respond to a request for comment on the report.

But Rep. Jeff Miller, R-Florida, and the chairman of the House Veterans Affairs Committee, said that despite the report’s “confusing bureaucratic parlance” the bottom line is clear.

While the 55-page report detailed the ongoing problems at the hospital, it also recommended a series of improvements, like implementing a consult management policy and developing a process for reviewing charts of dead patients who had open consults, in an effort to determine if and how the delay in care might have affected their cases.

The VA agreed with all 14 of the recommendations made by the inspector general, according to the report, and has already implemented several of them.

VA Deputy Secretary Sloan Gibson was quoted in an e-mailed statement as saying that the system has made “irrefutable progress,” but that there is still work to be done. The statement went on to say that the department is “strongly committed to developing long-term solutions that mitigate risks to the timeliness, cost-effectiveness, and quality of care provided through the Veterans Health Administration.”

“Our new Phoenix VA Health Care System Director RimaAnn Nelson is uniquely suited to continue to build upon the progress already being made in Phoenix,” Gibson said in the statement. “She has a record of taking on difficult challenges and improving service to our Veterans.”

But state lawmakers do not share that confidence – less so after the release of Tuesday’s report.

Flake, McCain and four member of the House from Arizona wrote last week to the president and the VA challenging Nelson’s ability and pointing to problems that occurred at the St. Louis VA facility when she worked there in 2011.

“Unfortunately, this IG report comes right on the heels of yet another deeply flawed executive being sent to ‘lead’ the Phoenix VA,” Rep. Ann Kirkpatrick, D-Flagstaff, said in a statement Tuesday. “So here’s my message to the VA’s top leaders: Stop sending your problems to Phoenix, and start fixing ours.”