People who signed up for Obamacare coverage at enrollment fairs like this one two years ago will likely see higher premiums next year, but they could be offset by higher federal subsidies. (Cronkite News file photo) 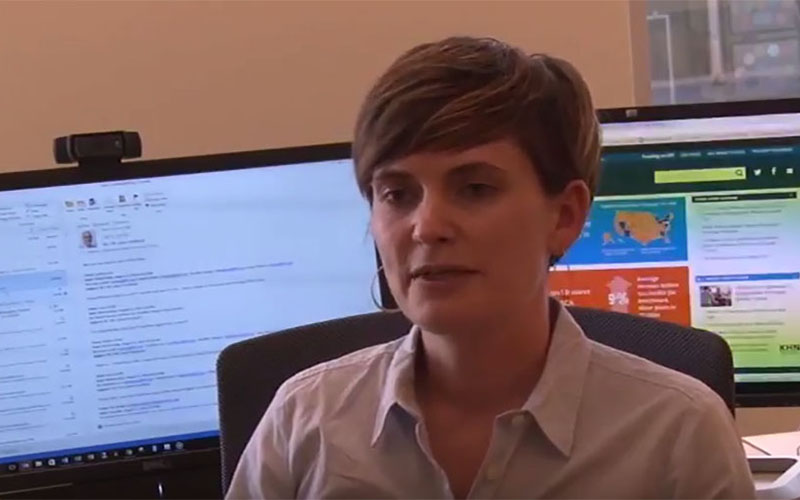 Cynthia Cox of the Kaiser Family Foundation said premiums under the Affordable Care Act could rise as much as 9 percent for some plans next year, as insurers leave the marketplace. (Photo by Keshia Butts/Cronkite News)

WASHINGTON – Insurance companies have one more day to let Arizona regulators know if they will drop or limit coverage under Obamacare, but this much is already certain: Coverage will still be available, but it will cost more.

There will still be coverage, but with fewer providers experts say costs will likely go up “much higher in 2017 than they had in the past couple of years.”

A national estimate by the Kaiser Family Foundation predicts that premiums for one of the lower-costs plans could rise as much as 9 percent next year, compared to 2 percent this year. In Arizona, those higher premiums could hit more than 100,000 people.

“The general trend is, as premiums are going up they are going up faster then certainly consumers would like and even supporters of the law expected or hoped,” said Michael Cannon, the director of health policy studies at the Cato Institute.

Insurance companies have until Tuesday to let state regulators, and their customers, know whether they will still be offering coverage at all or scaling back plans when the next open enrollment period under the Affordable Care Act begins on Nov. 1.

As of last week, five companies in Arizona had announced plans to pull out or pull back: Health Choice, United Healthcare, Humana, Blue Cross Blue Shield of Arizona and Health Net.

For the insurers, it’s a business decision: They are losing money on the policies they have offered in previous rounds of the Affordable Care Act, better known as Obamacare.

“Our focus will be on our customers and finding the best way for them,” Stelnik said.

Health Choice opted out of the Arizona marketplace for similar reasons, said Laura Waugh, the director of marketing and communications there.

“The business and regulatory uncertainties that exist at this time with respect to the federal health insurance marketplace significantly impacted our decision to discontinue our marketplace product offerings,” Waugh said in an emailed statement.

The shifting marketplace was not unexpected, as it is still a relatively new market, said Allen Gjersvig, director of navigator and enrollment services at the Arizona Alliance for Community Health Centers. But he said he also expects “as we go forward for some companies to expand coverage.”

In the meantime, people looking for coverage in the next round of Obamacare, which runs from Nov. 1 to Jan. 31, should still have plenty of plans to choose from, analysts said.

“In the key population areas of Arizona there is still going to be significant competition so that people can choose among a variety of plans, and that’s going to be very helpful to them,” said Ron Pollack, executive director of Families USA.

But they should brace for higher costs.

“What we are seeing so far is that premiums are going up much higher in 2017 than they had in the past couple of years,” said Cynthia Cox, associate director of health reform and private insurance at Kaiser Family Foundation.

Cato’s Cannon said there are several reasons why premium prices are rising.

“It requires people to buy more coverage than they did otherwise and it prevents insurance companies from saying no to people who have pre-existing conditions,” Cannon said of Obamacare. “And then it encourages those with expensive illnesses to sign up for the most comprehensive plans.”

But Pollack said that while premium prices will increase, so will the federal subsidies many consumers get to help them pay for their coverage.