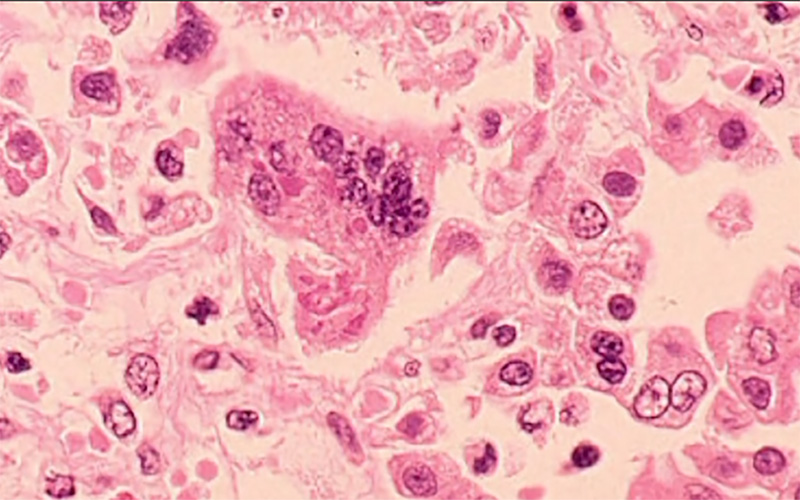 The measles virus under a microscope. (Photo courtesy of CNN Newsource)

Originating from an inmate at the private detention center in Eloy, the disease is the largest outbreak that the state has seen in years. Last year, there were seven cases in the state from an infection at Disneyland in California.

“Even one case is an outbreak for us. Having 11 cases in our state is a really big deal,” said Jessica Rigler, chief officer for the Bureau of Epidemiology and Disease Control for Arizona Department of Health Services.

This infectious viral disease is known for its red rash irritation, and is airborne; therefore easily spread through coughing, sneezing, or direct human contact. People can spread the disease without knowing they are.

“It’s so contagious that it can live in the air space after an infected person leaves the room. So even if you enter a room long after someone who has measles has left, you are still at risk if you haven’t been properly vaccinated,” Rigler said.

Young children and the elderly are most susceptible to the disease, according to the Department of Health Services. The department urges everyone to get a measles vaccination if they haven’t had one before.

“This is a really great example of why vaccination is so crucial,” Rigler said. “We have a measles vaccine, it’s very effective at preventing measles disease and so we really encourage parents to get their kiddos vaccinated and everyone to check on their immunization history to make sure that they are protected.”

If you suspect you or your child has measles contact your Arizona county health department or local health provider.

She urged anyone with measles symptoms to call their doctor’s office before leaving the house.

“So you really need to make sure that you are calling your doctor’s office before — letting them know that you think that you may have the measles — and then following up with them to see what they want you to do,” said Rigler. “They may book you at the last appointment of the day or have you go through the back door so they can immediately isolate you.”

Symptoms generally appear four to 12 days after exposure, but can take up to 21 days. Early symptoms resemble a common cold: high fever, running nose, itchy eyes and a cough. However, after a few days, a “red raised blotchy rash” develops.

Rigler says that the department expects to see a second wave of cases in the months ahead.