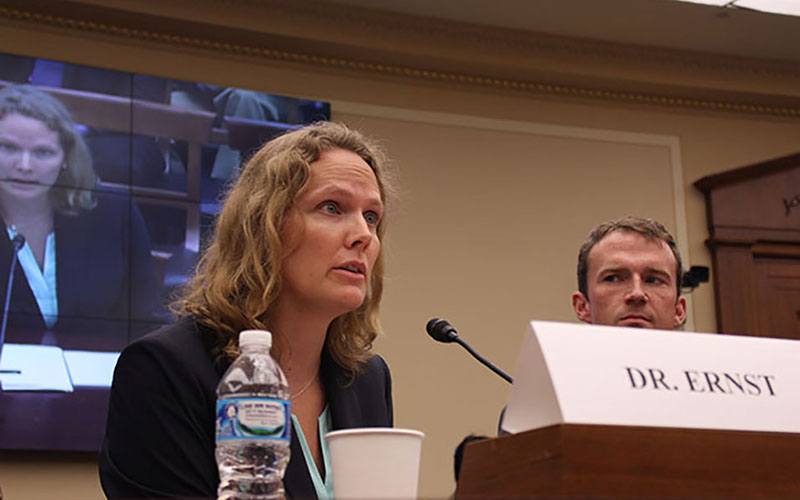 Kacey Ernst, an epidemiologist in the University of Arizona’s Epidemiology and Biostatistics Department, said Phoenix is one of the best areas in the nation for tracking mosquitoes that can spread the Zika virus – thanks in part to its network of traps for mosquitoes that can carry West Nile virus. (Photo by Sophia Kunthara/Cronkite News)

WASHINGTON – Phoenix is one of the best regions in the nation when it comes surveillance of mosquitos that can carry the Zika virus, one of the hard science approaches that could help check the spread of the disease, an Arizona epidemiologist said Wednesday.

Kacey Ernst, an epidemiologist in the University of Arizona’s Epidemiology and Biostatistics Department, was one of four scientists called to testify before the House Committee on Science, Space and Technology on the “science of Zika.”

The hearing came as Congress wrestles over a White House request for $1.9 billion in emergency funding to fight the Zika virus. The House has approved $622 million for the effort while the Senate has passed a $1.1 billion allowance.

It also comes as experts say the warmer summer temperatures are sure to bring an increase in mosquitoes that carry the disease, that has been linked to everything from joint pain to severe birth defects.

“I don’t think time is on our side with Zika,” said Hadyn Parry, CEO of genetic engineering company Oxitec and one of the witnesses at Wednesday’s hearing.

Arizona has had relatively few cases so far. State health officials have reported only three confirmed cases in the state, out of more than 500 in the U.S., and all of the Arizona cases in people who contracted it while outside of the United States.

Zika can be transmitted through mosquito bites, sexual contact, blood transfusions and from mother to child, according to the Centers for Disease Control and Prevention. But mosquito bites, from the aedes aegypti mosquito, are the most common source.

Ernst said the Phoenix area has been successful in tracking that mosquito because of an existing network of traps set up to catch mosquitoes that can carry the West Nile virus. Those 750 carbon dioxide traps also attract aedes aegypti.

The city also has traps in place specifically for aedes aegypti.

Ernst said that network is rivaled only by Miami and Key West and has helped officials keep tab on the spread of the mosquitoes.

“We really need some surveillance in every municipality to really understand what the distribution (of the mosquito) is,” Ernst said after her testimony.

Even though mosquitoes are more prominent in humid areas, they can show up on arid climates in moist places like lawns or indoors. Aedes aegypti in particular are drawn to cooler temperatures and are often found indoors, putting them in close proximity with people.

They can breed with just an inch of water, and any objects that can collect water can create conditions for them reproduce, even just scraps of trash found outside.

Aedes aegypti is found throughout southern Arizona, Phoenix and Yuma. The same mosquito can also be a carrier for the dengue and chikungunya viruses, which have been transmitted through Latin America and Mexico for several years without any local transmission in Arizona.

Ernst said it’s too early to say whether Zika could stop at the border, as dengue and chikungunya appear to have done – so far.

Zika “would have to be introduced into the local mosquito population through an infected traveler, and you would also have to have social conditions where the mosquito and the humans are interacting and allowing that transmission to occur,” Ernst said.

Symptoms of Zika include fever and joint pain, and most people don’t realize they have been infected, according to the CDC. But the disease has been linked to birth defects, putting women who are pregnant or may become pregnant at risk of the most harmful effects.

Ernst and the other witnesses at Wednesday’s hearing agreed that there should be an advisory against non-essential travel to countries with a Zika outbreak for at least pregnant women.

Ernst said one key way to prevent mosquito breeding is to make sure water doesn’t collect in or around homes.

“A lot of the things people are doing to prevent West Nile virus they can also do at home to prevent Zika virus transmission if it were to occur in Arizona,” she said, including emptying standing water and avoiding “peak biting hours for the aedes aegypti mosquito” at dawn and dusk.