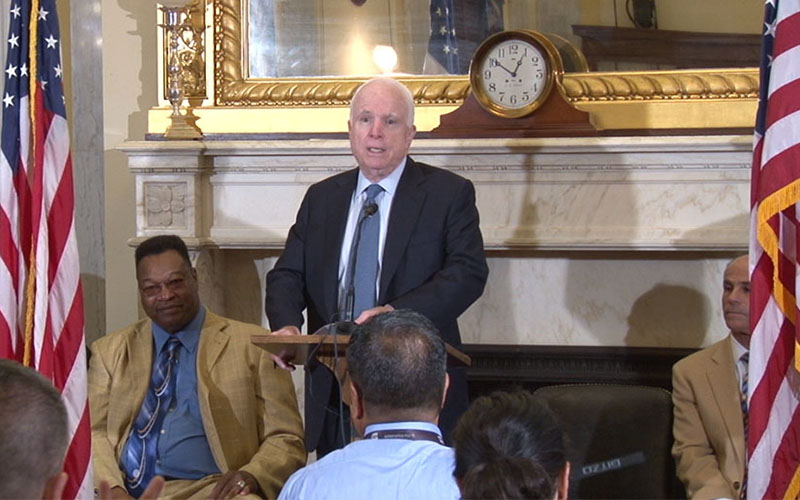 Sen. John McCain, R-Arizona, a boxing fan and former amateur boxer, said research into sports-related concussions like that being done by the evada Athletic Commission, is essential. (Photo by Katie Bieri/Cronkite News) 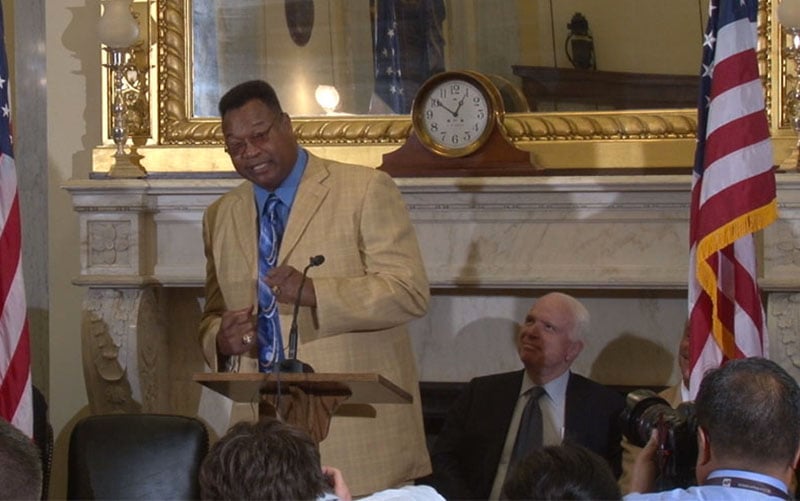 Former WBC heavyweight champion Larry Holmes said it was never his goal to hurt his opponents when he got in the ring, but that “in the game of boxing … that’s what you’ve got to do.” (Photo by Katie Bieri/Cronkite News) 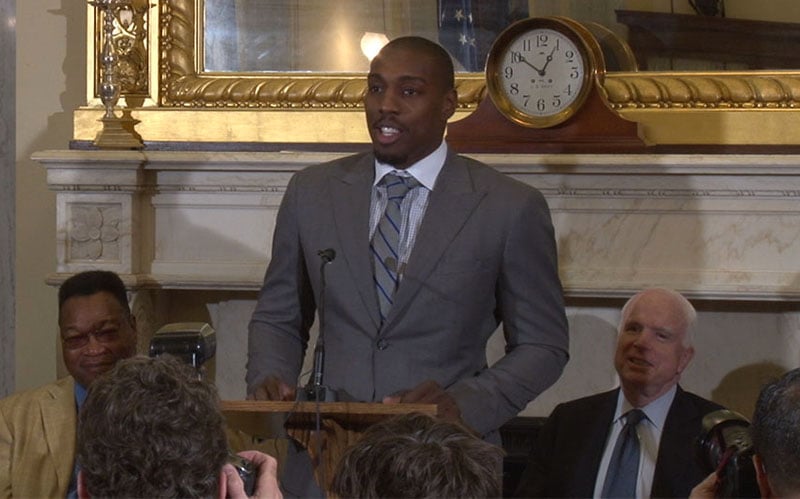 Mixed martial arts fighter Phil Davis said that, like the punch that knocks fighters out, concussions were “for too long, the punch that a lot of people didn’t see, or did not investigate.” (Photo by Katie Bieri/Cronkite News)

WASHINGTON – Mixed martial arts fighter Phil Davis has a theory about fighting that he said neatly sums up the problem of concussions in professional sports.

“It’s the punch that you don’t see that knocks you out,” Davis told the crowd in an ornate Senate hearing room Tuesday. “And for too long, the punch that a lot of people didn’t see, or did not investigate, was the effects of concussion.”

But that punch is now being seen, and will be investigated, as the Nevada State Athletic Commission will begin to require regular brain testing of athlete in fighting sports, a move welcomed Tuesday by Davis and other current and former athletes who joined Sen. John McCain, R-Arizona, at the Capitol Hill news conference.

“Young men and women who engage in these sports are not going to put their lives and their futures in jeopardy” by risking a brain injury, said McCain, a former amateur boxer himself and a fight fan.

Beginning in July, the athletic commission said it will start to require an annual evaluation of the brain health of fighters using the Cleveland Clinic Concussion – or C3 – app, created by the Luo Ruvo Center for Brain Health at the Cleveland Clinic. The tests will determine how a fighter’s balance, reaction time, memory and vision have changed over time.

Athletic commission board member Pat Lundvall said that results of the tests will not be “adverse to fighters.”

“We’re creating a database and evaluating each fighter for changes after time,” she said.

Over time, the possibility of damage escalates in sports like boxing, mixed martial arts and football, said the players at Tuesday’s event.

“I want you all to know that I had 75 professional fights, 69 wins, and 44 knockouts,” said Larry Holmes, former WBC heavyweight champion. “My intention was not to hurt anybody. But since you’re in the game of boxing, I guess that’s what you got to do.”

“In a sense, we are like racehorses,” Trout said after Tuesday’s event. “They train us; they run us. If we win, we get the glory.”

But as “soon as a horse gets lame, they send you out to the pastures,” Trout added. That’s why he welcomed the plan by the athletic commission and the Cleveland Clinic to study the long-term effects of concussions and brain injuries on athletes.

Davis said that change in how the sports industry approaches the health of its players is long overdue.

“We can enjoy these (sports),” Davis said. “But what gives us our humanity is how we proactively take care of all the participants, both professional and amateur.”