Rep. Trent Franks, R-Glendale, leads other lawmakers supporting religious freedom ahead of Wednesday’s Supreme Court hearing in the case of Little Sisters of the Poor, who are challenging a section of Obamacare. (Photo by Danika Worthington/Cronkite News) 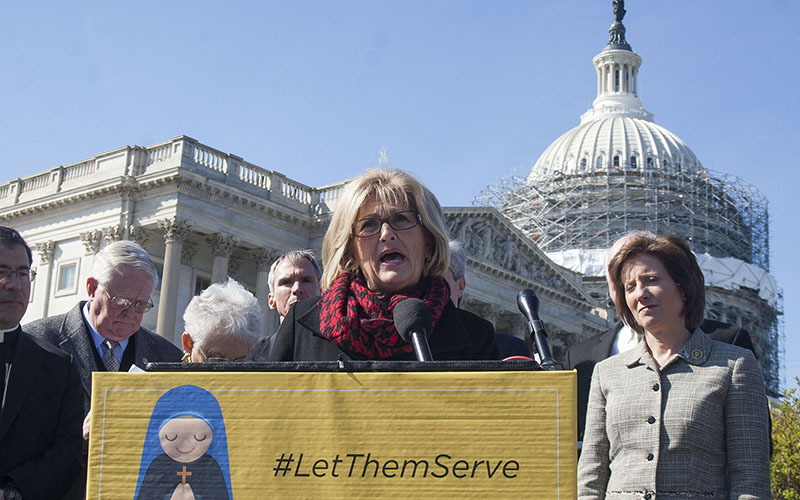 Rep. Diane Black, R-Tennessee, was one of nine lawmakers saying the Little Sisters of the Poor Home for the Aged faces an “unconscionable” choice between going against its religious beliefs or paying millions in fines. (Photo by Danika Worthington/Cronkite News)

WASHINGTON – Rep. Trent Franks, R-Glendale, led other lawmakers Tuesday in a show of support for religious groups on the eve of their Supreme Court challenge of an Obamacare mandate for birth-control benefits in employee health plans.

The challenge by Little Sisters of the Poor Home for the Aged and six other religious organizations will be the fourth challenge to part of the Affordable Care Act – better known as Obamacare – to reach the high court when it is heard Wednesday.

The act exempts most religious groups from having to pay for birth control, and it lets others get around the requirement by stating their moral objection and authorizing a third party to provide the coverage.

But the groups challenging the law claim that complying with the third-party work-around set up by the Department of Health and Human Services would still “make them morally complicit in grave sin.”

“The fundamental rights of speech and freedom of religion do not stop at the exit door of your local house of worship, but instead they extend to every part and area of your life,” Franks said at a news conference with eight other House members at the Capitol.

But Jodi Liggett, a spokeswoman for Planned Parenthood of Arizona, disagreed.

She said health care is something employees earn, and said that letting an employer control an employee’s health care would be like letting them dictate how employees spend their paychecks.

“No one should have to ask their boss for permission to get the health care they need. Period,” she said in the statement. “We hope that the Supreme Court will agree with that simple statement.”

Liggett said pro-life supporters should back the provision of contraceptives.

“My goodness, if you don’t like abortion, really you should love contraceptives,” she said.

But Franks and the other lawmakers said Tuesday that groups like the Little Sisters of the Poor face an “impossible” and “unconscionable” decision to either go against their religious beliefs or face what they claim could be millions in fines.

“We want to be careful here that we don’t get so secular minded that we relieve the entire nation of such a religious conviction that we undermine and eviscerate the very founding document of the country,” Franks said.

With the February death of Justice Antonin Scalia creating the possibility of a four-four split on the court, Franks said “of course we are” worried about an evenly divided court. Such a split would let the lower courts’ rulings stand in the seven different cases that have been consolidated for Wednesday’s hearing.

Lower courts have split on their rulings, leaving no uniform standard for the country if the Supreme Court cannot decide.

If that happens, Franks said, the issue would likely be back before the high court once a new ninth justice is seated. And opponents of the law vowed to be there.