A friend of University of Arizona medical student James MacKenzie reacts to the news that James was accepted into the Johns Hopkins University School of Medicine. (Blake Benard/Cronkite News) 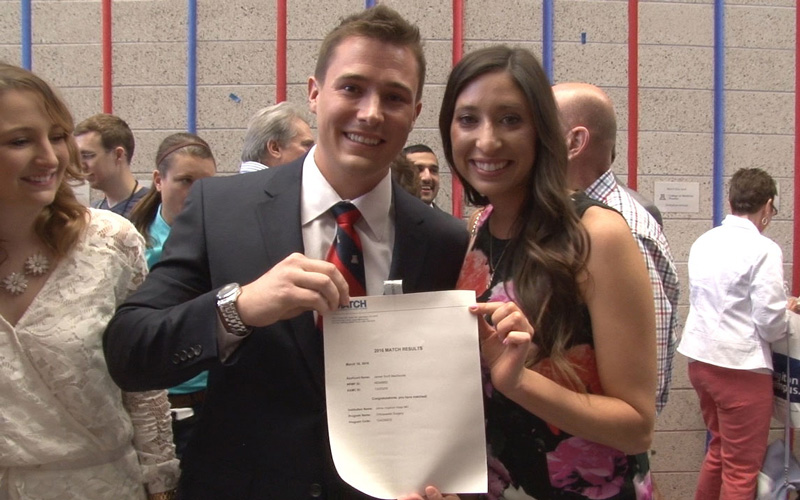 James MacKenzie and his girlfriend display the letter accepting James into the Johns Hopkins University School of Medicine.(Blake Benard/Cronkite News) 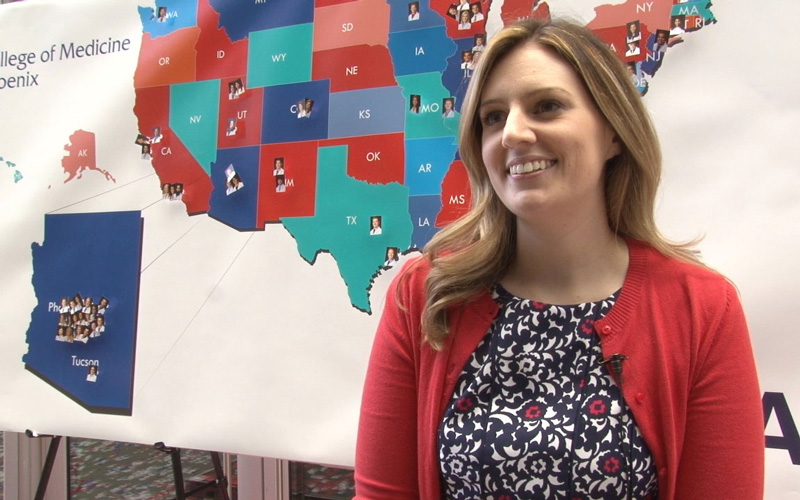 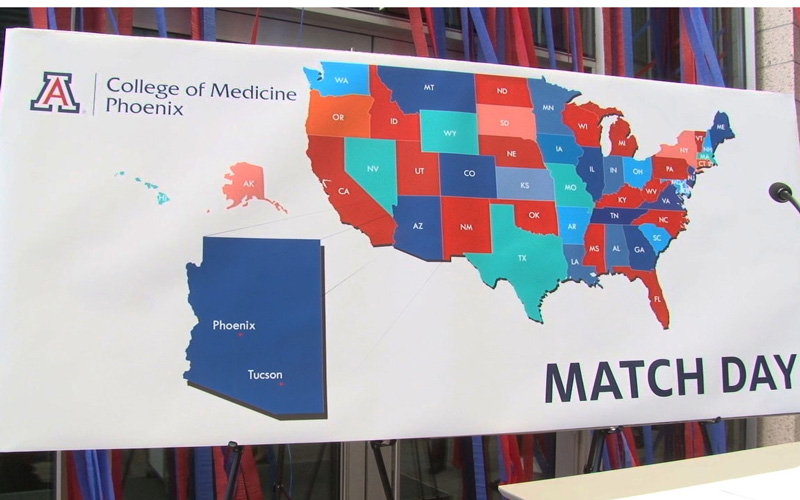 Amidst the teary eyes and confetti, medical students at the University of Arizona College of Medicine in Phoenix celebrated their acceptance into residency programs at schools all across the country.

“I told myself I wasn’t going to cry, but I cried like a baby,” James MacKenzie said after learning about his acceptance into the medical school at Johns Hopkins University in Baltimore.

MacKenzie grew up in Tucson, completed his undergraduate degree at UA, and is now months away from starting a three-year residency that allows him to complete his training as an orthopedic surgeon.

Every year, thousands of medical students like MacKenzie across the country go through the National Residency Matching Program. At 10 a.m. Friday — 1 p.m. EST — applicants learned their fate at the same moment in time.

At the UA school in Phoenix, confetti filled tubes with the letters of acceptance were dropped from balconies to the awaiting students below. Blue and red confetti flew and they opened the letters. Chaos, tears, laughter, and smiles ensued as they celebrated with their families and friends.

“Very much looking forward to it. I’m excited to learn my craft. To learn orthopedic surgery. It’s what I’ve wanted to do since starting medical school,” MacKenzie said.

MacKenzie will graduate in May. After graduation, he’ll head to Maryland to study for the next three years as a resident at the John’s Hopkins University School of Medicine.

More than a third typically remain in the state to practice medicine.

But Arizona has a limited number of residencies available. It was a tough decision for student and mother Christine Moss.

“We were very torn between Phoenix and Nashville. Maricopa has a great emergency program that’s just as fun as the one is in Nashville,” Moss said.

Ultimately, Moss chose Vanderbilt University in Nashville so she and her husband, who is a musical engineer, can pursue their passions.

“We felt this was the right time to have a three-year adventure,” Moss said. “We definitely plan to come back home. So we get to spend three years pursuing our dreams and then come back home to our family and friends in Arizona.”

The next journey began today for 66 future doctors.

“The next three years is going to be lot of hard work. A lot of long hours in the hospital. But it’s going to be really great,” Moss said.