VA Secretary Robert McDonald, center, at a House Veterans Affairs Committee hearing where he told lawmakers staffing and filling vacancies is “one of the biggest issues we face, if not the biggest.” (Photo by Danika Worthington/Cronkite News) 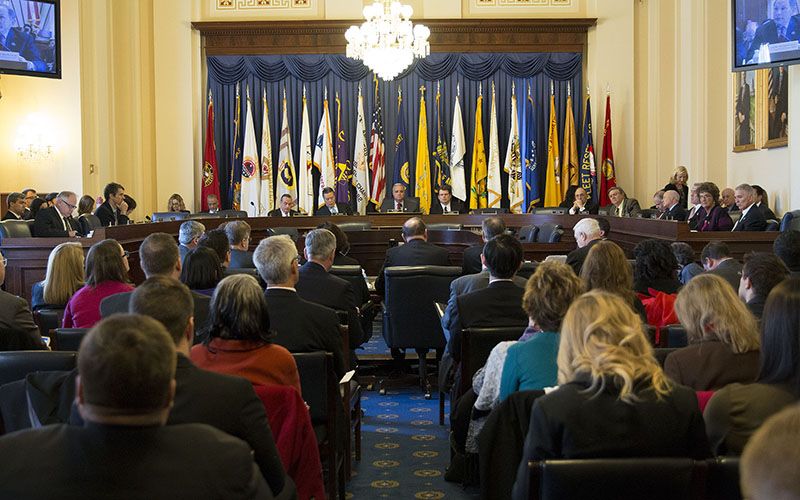 The House Veteran Affairs Committee, which has been investigating problems at the Department of Veterans Affairs, grilled officlals on everything from training to veteran suicide during a budget hearing. (Photo by Danika Worthington/Cronkite News)

WASHINGTON – Veterans Affairs Secretary Robert McDonald told lawmakers Wednesday that his agency is having trouble filling vacancies at VA medical centers around the country, which has led to “critical staffing problems” at the facilities.

McDonald said applications to the VA are down as much as 75 percent since problems uncovered at the Phoenix VA two years sparked probes that revealed systemic problems at the agency nationwide, leading to the resignation of a secretary.

It also comes as the health care industry as a whole faces shortages of medical personnel and struggles to fill openings.

“The issue you mentioned with vacancies is one of the biggest issues we face, if not the biggest issue we face,” McDonald said in response to a comment from Rep. Jackie Walorski, R-Indiana, on shortages of doctors, nurses and administrative staff.

Putting the VA in vacancy

The Department of Veterans Affairs was grappling with a job vacancy rate above 12 percent at medical treatment and administrative facilities in January, and the numbers were even higher at Arizona facilities. Vacancy rates were:

VA reports showed that 12.1 percent of jobs at agency medical centers nationwide were unfilled in late January. The numbers were even higher in Arizona, where an average of 14.9 percent of the jobs at the three medical centers in the state were vacant.

When employment at Veteran Health Administration offices was included, those vacancy rates jumped to 12.9 percent and 16 percent, respectively.

The VA emphasized that vacancy numbers are fluid, changing every month. But, as of Jan. 22, Phoenix had the 15th-highest job vacancy rate of the 130 VA medical centers in the country, at 19 percent.

McDonald told the House Veterans Affairs Committee that he has personally visited dozens of colleges to recruit medical students, but that the people he talked to had the perception that the agency was intent on firing its employees. The VA also struggles to recruit medical personnel away from the private sector to come to the agency where they are likely to have a lower salary and be posted to a less desirable, rural locations.

In a separate interview Wednesday, Sen. John McCain, R-Arizona, conceded that there has been “upheaval” in the VA, especially in Phoenix. But he said Congress has also given the agency the tools to get out from under its problems, pointing to 2014 legislation that allowed for rapid hiring by the VA.

“There’s two of the executives who have been on court administrative leave that were part of the scandal,” McCain said. “As long as they’re still in their positions, even though they’re on leave, they can’t fill that (position). I mean, it’s crazy.”

The VA hired 41,000 new employees last year, but that represented a net increase of only about 14,000 staff, or 4.7 percent of the Veterans Health Administration payroll, according to McDonald’s prepared statement for the committee. The department said in an emailed statement last week that the VA has about a 9 percent turnover rate – which it said is better than an 18 percent turnover rate in the private sector.

VA officials said the current staffing shortage mirrors national trends in health care, where a study by the Association of American Medical Colleges predicted that the shortage of physicians could range from 46,000 to 90,000 in the next 10 years.

Lawmakers on Wednesday also urged the VA to focus on recruiting mental health care providers, with which both McDonald and VA Under Secretary for Health David Shulkin agreed.

“If you’re a mental health professional, the VA wants you, we need you,” Shulkin said.

For McCain – who said he is now focused on expanding access to Choice Cards so more vets can go to providers of their choice outside a 40-mile radius – staffing is just one of the problems to be addressed at the VA.