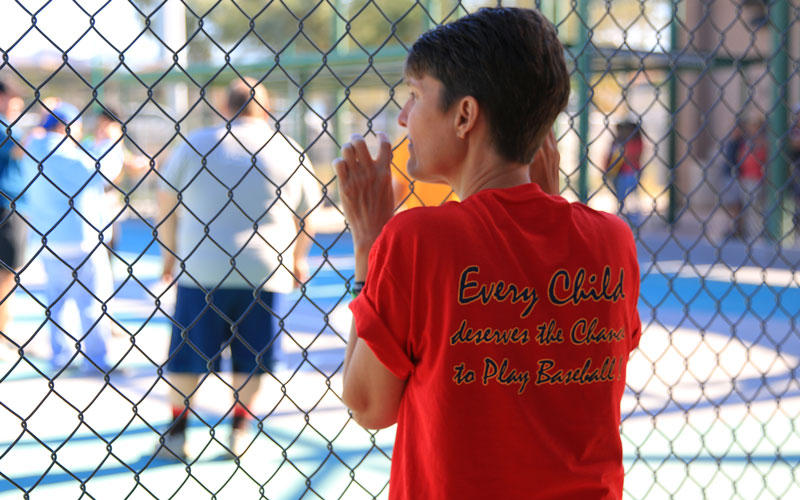 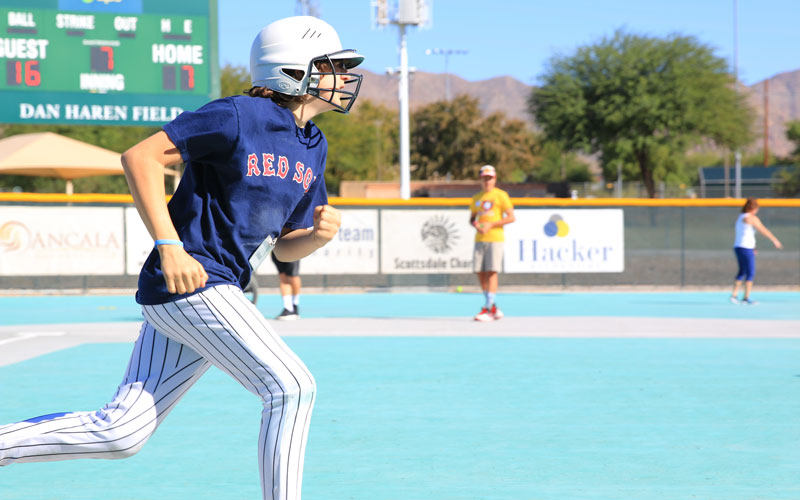 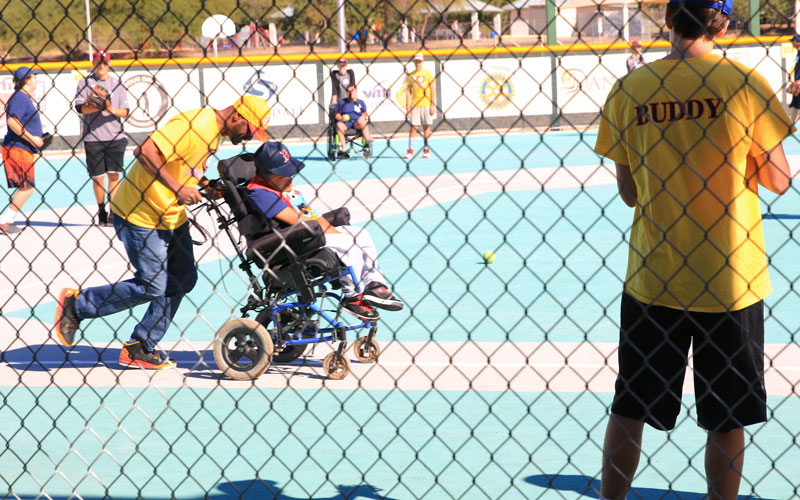 A baseball “buddy” assists a player around the bases at the Miracle League. (Photo by Madison Alder/Cronkite News)

At 11:30 a.m. the game begins. The players flock to the field made of smooth green rubber that eases its accessibility to players with wheelchairs and walkers. Thick white lines are painted in between the bases to guide players who have visual impairments.

The Miracle League offers a sort of sports haven for the players and their families.

Last year, two players who used wheelchairs were inspired by their teammates to attempt to walk on their own. The players borrowed walkers and held the hands of volunteers until they finally made their way around the bases, unassisted, for the first time.

In the bleachers, among the crowd of cheering fans, Kirsten Murphy watches with her husband. Her 13-year-old son Brandon orbits around the bleachers, intermittently checking in with his parents and holding a handmade Dodger’s sign and cheering on both teams. His shoe is untied.

The Murphy family wakes up at 7:00 a.m. to drive Brandon, diagnosed with Autism Spectrum Disorder, to the Miracle League from Buckeye, a trip that takes about an hour and 15 minutes.

Switalski remembers another family calling her the day of a game and telling her they would not be able to come because of the financial toll the drive to the stadium was taking on them. Another family drove out on a Saturday and spent the whole day because it was the only day they could make the long drive.

Brandon is among those who have found success in the program by becoming more social.

Murphy said her son began showing signs of Autism when he was very young. But it was hard to convince her and her husband that there could be something wrong with their child.

When the diagnosis finally came, Brandon was seven years old.

“His doctor recommended animal assisted therapy and he did that for probably about more than a year we were able to scrape together enough to do it,” Murphy said.

“He would go in and just curl up on the floor with the dog and you could just see the stress and the anxiety and all those things just kind of melt off of him,” she said.

But after a while, the family couldn’t afford it.

The Mayo Clinic defines Autism Spectrum Disorder as, “a serious neurodevelopmental disorder that impairs a child’s ability to communicate and interact with others. It also includes restricted repetitive behaviors, interests and activities. These issues cause significant impairment in social, occupational and other areas of functioning.”

“As far as state resources go, I was told that because my son was diagnosed after he was six years old, he didn’t qualify for anything,” Murphy said. “We pay everything pretty much out of pocket.”

Not only do the Murphy’s pay out of pocket, they struggle to find insurance too. Brandon’s father Robert is a contractor, and his mother is a substitute teacher and a graduate student studying special education and applied behavior analysis.

“It really comes down to a lack of information on how to get these resources,” Chi Shedd, the coordinator of Transitional Assistance at Gompers Habilitation Center in Phoenix said. “If you get the diagnosis, then you’re covered by [Division of Developmental Disabilities].”

Murphy remembers trying to navigate the system after Brandon’s diagnosis. “There’s really no one to walk you through it,” she said.

Ever since Congress passed Education for All Handicapped Children Act in 1975, schools are required to provide services for children with disabilities. These laws were then modified by the Individuals with Disabilities Education Act, which introduced Individualized Educational Programs (IEP) into the system. The goal of this program is to work with parents to make goals for children with disabilities that relate directly to education.

Murphy says one of the hardest aspects of navigating the school system is the process of making educational goals through the IEP. Before their first IEP meeting, Murphy took Brandon for an evaluation. The physical therapist set goals for his care, which included learning to tie his shoes —- something Brandon is frustrated he can’t do.

“The school took a look at it and right away they knocked off about three of them and they said, ‘we can’t necessarily say that’s an educational goal,’ ” Murphy said. “So even though in the real world he needs help, the school can only do what they can make an educational goal out of.”

At the next meeting, Murphy hopes to advocate for several goals she believes are essential to Brandon’s well being.

“Because we can’t afford to do [private therapy] sometimes he just doesn’t get it,” Murphy added. “And it breaks my heart as his mother because I want what’s best for him.”

Carrie Faulkner leans up against the stadium fence while her children Campbell, 9, Sage, 12, and Clayton, 19, take the field. She wears a large red Miracle League shirt that reads: “Every child deserves a chance to play baseball.”

Campbell Faulkner wears a small backpack and a feeding tube that supplies the nutrients he needs to live. But it doesn’t hamper his enthusiasm for baseball.

“At 15 months we were told for the first time that our child was at risk for Autism,” said Campbell’s mother Carrie Faulkner. “And that started our journey.”

When he was one year old, Campbell had a seizure in the middle of the night. After that, he couldn’t hold his head up. He didn’t make eye contact and he didn’t smile.

The Faulkners are a close-knit family. Campbell’s siblings attend the games and work as buddies for him and the other players. Clayton, Campbell’s oldest brother, is in his first year of college and is taking out loans to pay for his education because he knows money is tight for his family.

“They look at him as a blessing,” Carrie Faulkner says of Campbell’s siblings.

Every year, she said, it seems that more of Campbell’s needs are not covered.

“We don’t get insurance help anymore for any of his medicines, we pay for those out of pocket,” she said.

So far, the Faulkner’s have flown Campbell to Atlanta twice to receive care from a specialist that their insurance doesn’t cover. The family needed about $500 for the trip so they decided to do a garage sale.

“We made $505 that day,” Carrie Faulkner said, “And we literally had garbage.”

This garage sale was the beginnings of what the Faulkners call “Campbell’s Crew,” an organization of friends and families committed to helping Campbell get the care he needs. Campbell is both an assistant coach and a player for the at Miracle League.

Over the years, numerous doctors, all of whom came to different conclusions, have diagnosed him. Early on in the testing, one therapist noted that Campbell was aspirating and they began to entertain the idea that Campbell might have something more than Autism.

After that the family saw several neurologists. He’s had part of his leg muscle removed for testing, as well as MRI’s, CT scans, a lumbar puncture and repeated blood tests.

Even now, Campbell doesn’t have a firm diagnosis.

Doctors believe that his disability lies somewhere in the realm of Cerebral Palsy, but his case is not common. Campbell is part of a rare genetic study at Translational Genomics Research Institute (TGen) in Phoenix that his parents hope will bring answers.

But it’s his siblings who are the best caregivers for him, said Campbell’s father, Shane Faulkner.

His sister Sage pushes his wheelchair into class and takes on the role of caregiver while they are at school.

“These kids can do things faster than a nurse can,” said Carrie Faulkner. “When Campbell’s pump is beeping in the middle of the night, it’s usually our second born [Carsten] who is up checking on wires and tubes because we get tired, we fall asleep.”

The wheels on Di Angelo Sanchez’s wheelchair whir as he makes his way around the bases. His stepfather, Ivan Hall, helps him. His mother cheers wildly in the bleachers, just seats away from the Murphys.

Jeanette Palimo, Di Angelo’s mother, knew early on in her pregnancy that her son would be disabled.

“I was told to abort him because of the difficulties I was going to face with him,” she said. “But I don’t believe in abortion.”

When Di Angelo arrived a week early, he went straight to the Neonatal Intensive Care Unit, where he stayed for two months.

“The way you see him today is not the way he was born, he had basically no nose and no pallet,” Palimo said. She remembers making the choice to sign her name on a Do Not Resuscitate form, saying, “If he was going to stop fighting I wasn’t going to make him suffer.”

But he made it through the night and every night since then.

After his stay in the hospital, Palimo and Di Angelo went to a home in Tucson that is part of Danville Services Corporation, an organization devoted to helping those with developmental and intellectual disabilities and their families. There, Palimo learned how to care for Di Angelo. When he was six-months-old, he went home.

Navi, Di Angelo’s 5-year-old sister, smiles, jumps and cheers as her brother steps up to the home plate at the Miracle League. Ivan Hall, his stepfather holds Di Angelo’s hand as he swings the bat at the first pitch.

When Di Angelo was born, Palimo was just 19. She consulted her mother frequently while applying for assistance from the Department of Economic Security’s Division of Developmental Disabilities and Social Security.

“Once I did get into the programs, they helped me out a lot,” Palimo said. “They actually worked with me a lot with a lot of stuff so it wasn’t that hard.”

The only thing she pays for out of pocket is a specific brand of diapers for Di Angelo.

“My son’s condition is really rare. There’s not a child like my son,” she added. “So it was really hard to not be able to go to another parent that is going through the same thing and ask questions.”

Palimo feels isolated because of this and she fears that Di Angelo will be isolated too.

“He has a lot of issues,” Palimo said, “Especially with his seizures, people are afraid to be around him.”

One day, while at a routine appointment at the Children’s Rehabilitative Services (CRS) Clinic, Palimo saw a flyer on a bulletin board for the league. Now, it is one of the only things that Di Angelo wakes up for in the morning.

“I know it sounds funny, but he takes so many medications that he sleeps the majority of the time,” Palimo said, “But he wakes up for this.”

“I think he really enjoys it,” she said. “I know I do. I enjoy that there is something out there for him.”