The Arizona Department of Health Services — Bureau of State Laboratory Services certifies labs in the Valley according to federal guidelines, and also analyses, identifies and investigates infectious and communicable diseases including newly emergent pathogens. (Photo by Claire Cleveland/Cronkite News) 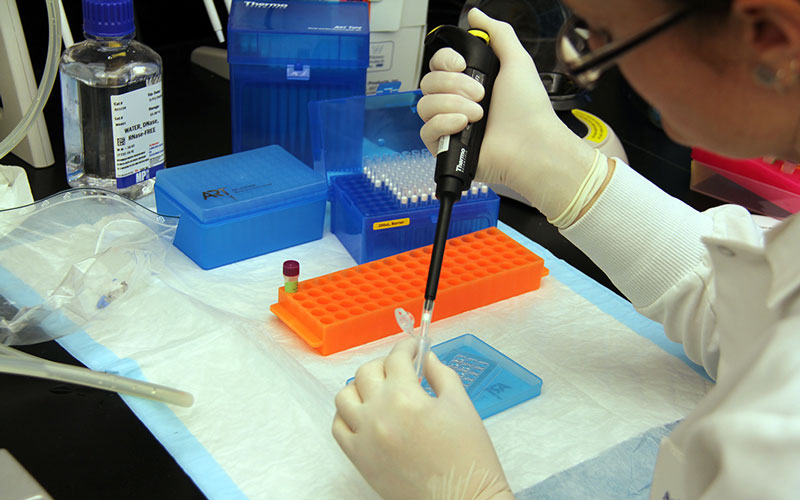 Some blood and virus samples are divided into smaller parts so that lab technicians at the state health department lab can test them for various elements. Here, this lab technician is testing a medication resistant virus. (Photo by Claire Cleveland/Cronkite News) 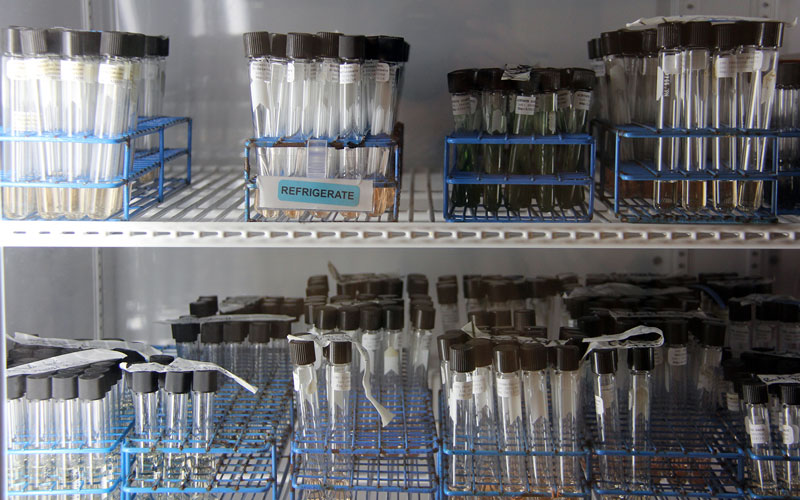 Just like blood, the contents of these vials at the Arizona Department of Health Services — Bureau of State Laboratory Services are cooled while in storage.
(Photo by Claire Cleveland/Cronkite News)

Theranos, a blood testing company and lab that operates in 40 different Walgreens around the Valley, has been scrutinized for its proprietary technology and methods. But that does not mean the Arizona law that allows patients to obtain blood tests and results without prior review by a doctor – a law that Theranos helped author – is in jeopardy.

“The legislation that passed earlier this year gave Arizonans more choice and input over their health care management, and provided cost-savings to consumers and to the health care system. Theranos is voluntarily complying with the FDA’s review of the testing methods, and Arizona’s Department of Health continues to monitor developments,” according to a statement from the governor’s office.

Theranos is a Silicon Valley start-up that made CEO Elizabeth Holmes the world’s youngest billionaire. The company is using Arizona as its test market.

Theranos offers more than 250 blood tests ranging from $1 to $120, and has developed finger-prick technology using a small collection tube called a nanotainer that Theranos claims allows these tests to be done on a few drops rather than a traditional vial of blood.

In July, the Food and Drug Administration approved the nanotainer for use in detecting the herpes simplex virus, but the FDA has not yet approved it for other tests and in a report released in October it stated the nanotainer was an “uncleared medical device.” The company currently uses the vials for only the herpes test.

Theranos is licensed and inspected just like any other lab in the state, said Victor Waddell, bureau chief of the Arizona Department of Health Services Bureau of State Laboratory Services. The state health department certifies labs under the Clinical Laboratory Improvement Amendments, which regulate all laboratory testing (except research) performed on humans in the U.S. The Centers for Medicare & Medicaid Services maintains oversight for compliance with the Medicare health and safety standards for laboratories, which the state lab also regulates under.

“If the lab’s doing clinical testing on a patient specimen in the United States it’s regulated under CMS, CLIA, so they will be inspected by CLIA and those people will go in and look at everything,” Waddell said. “So, if they have a result that doesn’t look right, that’s what’s going to be detected at that point and brought forward.”

The Arizona Republic
reported in November that state lab inspectors found issues with “proficiency testing, validation of instruments used to analyze blood samples, humidity levels outside of acceptable ranges for some lab instruments and how blood-sample collections were dated.”

Theranos responded and said all of the problems were resolved in a matter of days or weeks. The company has been secretive with its data, and was criticized in a Wall Street Journal
story for not submitting its results for a peer medical review. In October, Holmes said she would release the company’s test results for review.

Holmes would not agree to be interviewed for this story.

“We helped change the law in Arizona to improve access to health information for patients,” Brooke Buchanan, vice president of communications for Theranos, said by email. “Theranos is still committed to the highest safety and quality standards, which is why we’ve committed to the FDA as the gold standard for regulation. Theranos is also the first lab testing company to publish its validation and proficiency testing on its website.”

Holmes has been defending Theranos at numerous speeches across the country.

“We know what we’re doing and we’re very proud of it,” said Holmes at the Wall Street Journal’s tech conference in Laguna Beach, California, in October. “We know the facts, we know the integrity of what we’ve done.”

At Fortune’s Global Forum in November, she said: “We need to do a better job of communicating and we want to be the best at that, and as you can tell from this coverage, I am definitely not a PR person.”

The future of direct access testing in Arizona and the U.S. may depend on companies like Theranos proving accuracy and pushing for partnerships that make blood testing more accessible.

Holmes dropped out of Stanford at age 19 in 2003 to found the company after her uncle died from cancer. She said the idea for inexpensive, always available blood testing came from learning the importance of early detection. She said she wanted to lower the barrier for people to get blood tests and results.

“I know what we strive to do in our own work is to make this whole experience of lab testing better and more humane, and that’s why we’ve worked the way we have,” Holmes said at Fortune’s forum.

“I started this company because I’ve lost people in my family to cancer and other diseases and I know what that means and I think that if you engage individuals with that access you can change what we’ve all experienced there.”

Theranos has raised $400 million from investors, and the company has a valuation of $9 billion, according to Business Insider. The company has a high-profile board, including the former CDC director William Foege, former Wells Fargo CEO Dick Kovacevich, and two former secretaries of state, George Shultz and Henry Kissinger.

After years of positive press, the Wall Street Journal published a report in October questioning the accuracy of some of Theranos’ proprietary technology, citing anonymous sources who are former employees of Theranos. From that point on Theranos has been covered extensively by the national media.

Testing accuracy
Theranos isn’t the only company that has been criticized for potential inaccuracies. At-home DNA testing service 23andMe, which allows the consumer to ship saliva to its labs for genetic testing, is back to being available for health information after the FDA ordered the company to stop marketing its DNA test for analysis of risk factors for disease until the tests could be evaluated.

Biophysical, which performs blood tests, is another company performing direct-to-consumer testing. As is Exact Sciences, which tests for colorectal cancer using stool samples the patient sends in by mail and then sends results through a doctor.

Exact Sciences, 23andMe and Biophysical are nationwide providers that rely on consumers to purchase the product off the Internet, and then send their samples back to the company for testing and results. Theranos chose Arizona as its test market in an effort offer low-price testing to those who need it, and made its product available through Walgreens rather than the Internet.

“Arizona has a representative population of Medicare and Medicaid patients, and those who are uninsured, making it a state that can showcase the tremendous benefit of our low and transparent pricing,” Buchanan said in an email.

“Now, 7 million Arizonans have been empowered through access to critical health information, facilitation of engagement with and protection of physicians, and the creation of a model for other states across the country to shift toward preventive care, individual empowerment and price transparency.”

“Is it in the patient’s best interest from a healthcare perspective and healthcare investment perspective to have access to every single lab test that is available out there?” Noble said. “For example, cancer tumor markers and other very esoteric testing, we have maintained and said from the beginning we believe that it is vitally important that a physician be involved with their patient, with the tests that they are going about doing.”

Sonora Quest recently announced that it will be partnering with Safeway, after the Wall Street Journal revealed that Theranos and Safeway had a $350 million deal fall apart. Noble declined to answer whether Theranos is a competitor for Sonora Quest or whether the press surrounding Theranos has impacted Sonora Quest.

Arizona State University is the first university to partner with Theranos to offer its services on the downtown Phoenix campus to both students and community members at the ASU Health Services – Community Health Center.

“Offering a range of services allows us to serve patients whose needs and insurance coverage vary. The clinic included Theranos among the services they use because it allowed patients to be more engaged in their care,” Meenah Rincon, media relations and strategic communications for ASU, said in a statement.

ASU would not comment to whether there are concerns about Theranos’ accuracy and methodology.

Even though Theranos awaits approval from the FDA on its technology, its mission remains unchanged, the company said.

“We believe that no one should have to forego care because he or she can’t afford to get a lab test or can’t figure out how much it costs ahead of time. Convenience also matters. The more accessible care locations become, and the longer hours they are open, the better people can take control of their own health. We believe that access and cost transparencies will be appealing to many people, including college students who are often on budgets,” Buchanan said.