A patient waits for his prescription to be refilled at the Mission of Mercy clinic. The clinic offers free prescriptions to patients, with or without insurance. (Photo by Alejandra Armstrong/Cronkite News) 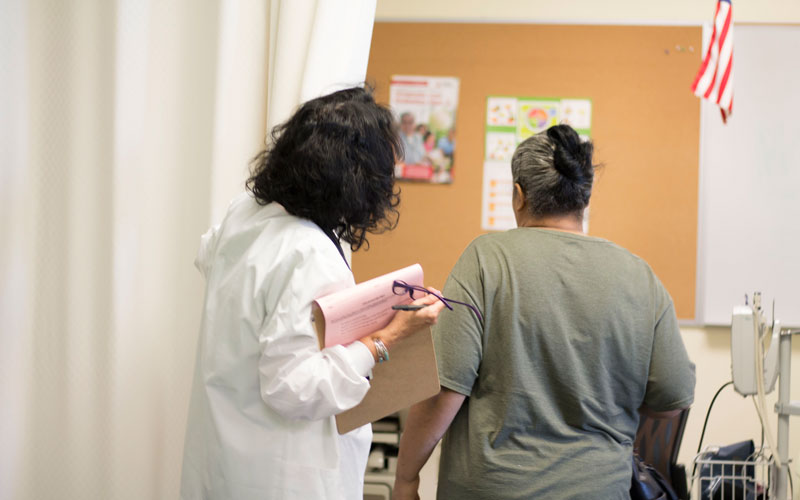 A doctor sees a patient at the Mission of Mercy clinic. The clinic’s patients are 58 percent adult women, most of them Hispanic. (Photo by Alejandra Armstrong/Cronkite News) 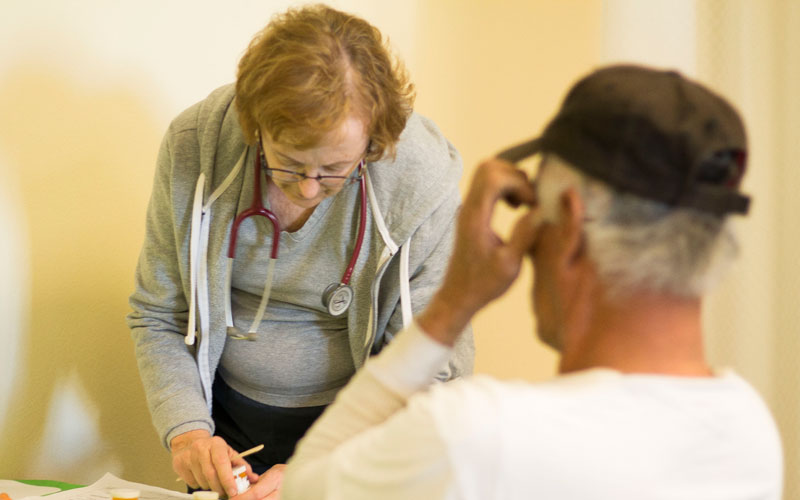 A patient visits the Mission of Mercy clinic, which sees about 60 patients every second and fourth Friday of the month. (Photo by Alejandra Armstrong/Cronkite News) 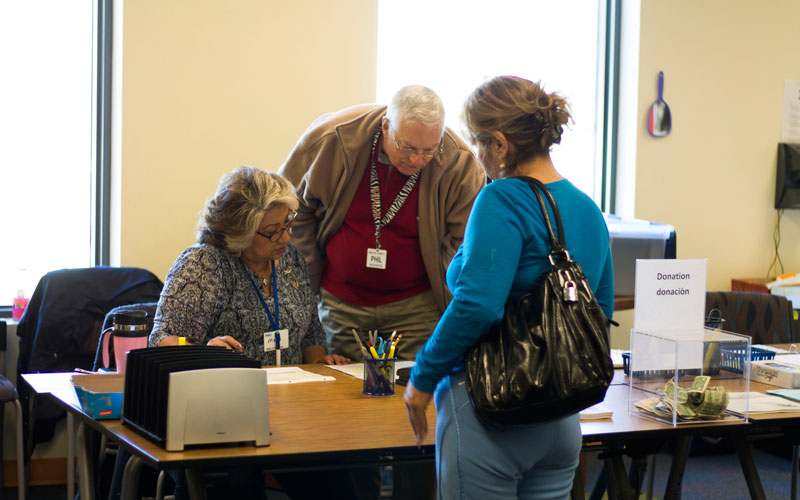 A patient checks into the Mission of Mercy clinic, which is available to anyone in the school Murphy Elementary School District community. (Photo by Alejandra Armstrong/Cronkite News)

At the center of the district shines a beacon of hope. The Murphy Education and Health Center, sandwiched between an unkempt empty lot and a mobile home park, appears out of place with its trimmed landscape of Palo Verde Trees, industrial design and pristine glass windows and doors. When the sun hits the center just right, it literally shines.

The school district, in partnership with the nonprofit Mission of Mercy, offers a free clinic to community members every second and fourth Friday. The clinic, located at 3140 W. Buckeye Road, hopes to add more days, but there isn’t enough money to do it now. Mission of Mercy Program Director Paula Carvalho has worked with nonprofits like the Mission of Mercy most of her adult life.

“I’m not a nurse. I’m not a health professional,” said Carvalho, who, among other things, helps raise money for the program. “For me, the work that I do has to come back to me in a way that I feel like I’m contributing.”

“It’s a way of being and knowing that you’re in service and that you are contributing to a greater good, a bigger mission something greater than yourself,” she said.

Everyone in the school district area, bounded by 19th and 49th Avenues, and from McDowell to Lower Buckeye Road, has access to this building and the Mission of Mercy clinic inside — something Medical Director Bradley Smith calls unique compared to other nonprofit clinics.

Each clinic provides primary care for children and adults with chronic illnesses, prescribes free medicine and doesn’t have requirements for patients to meet for eligibility, meaning anyone — insured, uninsured, legal citizens or undocumented immigrants — can receive medical care at the clinic, few questions asked.

“My personal belief is, you know, if they are lying to me or taking advantage, that’s between them and God,” Smith said.

On some days, women from the community come to the clinic for “cafecitos,” or coffee talk. On one Wednesday in October, the topic was breast cancer. They learn the clinic will be performing mammograms in December.

Some probably have never had one.

Griselda, 44, and her sister Maria, 40, arrive at the center in a their run-down SUV. There are 10 women in the classroom, all Hispanic, all mothers.

Griselda started regularly coming to the free clinic at Murphy School District two years ago. Maria has only been to the doctor a few times in the last few years. The two sisters are undocumented and have no health insurance. They are also a part of the majority demographic of patients at the clinic: 58 percent are adult females.

“I don’t think there is anything particularly special about the Murphy district, or that area, but it falls in line with other areas of the Valley that are particularly in need of healthcare, dental care, etc.,” Smith said.

Arizona has both a high percentage of uninsured residents and a growing Hispanic population. Nearly half of the Latino population in Arizona who live without health insurance say it’s because they cannot afford it, according to the Arizona Health Survey in 2010.

The Mission of Mercy assesses community need for a clinic in part by using Dignity Health’s Community Need Index scores. Scores are on a one-to-five scale with one being the lowest need and five being the highest need.

The CNI score for zip code 85009 – and the Murphy School District area – is five. Dignity Health uses income barriers, as well as cultural/language, educational, insurance and housing barriers to formulate the scores.

Carvalho said most live without health insurance because they can’t afford it, are employed by a company that doesn’t offer benefits or are afraid to ask about insurance because of perceived attitudes toward undocumented and poor populations.

According to a report by the Morrison Institute for Public Policy released last year, parts of Phoenix, Tucson, as well as tribal and rural communities are most affected by the lack of health care options. “In other words, impoverished urban areas (with its large number of Latino residents) and rural areas (with its limited healthcare access) are most at risk,” it said.

There was a favorable drop in the number of uninsured Arizonans after the first full year of the Affordable Care Act. The uninsured rate dropped to 13.6 percent in 2014 from 17.1 percent in 2013 in Arizona, according to Census data. While those numbers seem promising, there still is a large group of vulnerable people in Arizona who, like Griselda and Maria, are left uninsured, some with no solution in the near future.

“Let’s say somebody migrates here from Mexico, they tend to go with the people they feel most comfortable with or who they made friends with, or who speak the same language,” Smith added. “So the Murphy district is a good example, I think, of a lot of families who don’t have documentation, their kids may not have been born here, therefore don’t have access to Medicaid program AHCCCS [Arizona Health Care Cost Containment System].”

“Murphy has four schools, lots of people and a very large Hispanic population,” Kopnina said. “These people don’t have access to health care so educating them is very important to prevent or to help manage chronic health issues- in part, so they don’t go to the Emergency Room when they just need a primary care doctor.”

Hispanics may need a visit to a primary care doctor more often than they realize because they are at high risk for certain chronic illnesses due genetics and lifestyle choices.

The two most prevalent chronic illnesses in Hispanic patients are diabetes and hypertension, or high-blood pressure.

“I wouldn’t say those (diabetes and hypertension) are more common in Hispanics, but I think it’s out of control with the Hispanic population for a couple of reasons,” Smith said.

Physical activity and the food people eat play a role.

“Any doctor can tell you this, we still can do much better in terms of, not just in diabetes but with other chronic health problems, on lifestyle changes,” Smith said. “The best thing that we try to do is do education along with the medicine because there are ways.”

Also, food choices often are limited — either because of price or access to transportation.

According to U.S. Census data, more than 25 percent of Arizonans live in areas classified as food deserts — areas where a substantial amount of low-income residents have low access to grocery stores.

The Arizona Department of Health Services reports there are approximately 13 grocery stores per 100,000 people in the state. The nearest grocery store to the Murphy School District is a Food City — a local grocery chain known for its low prices and ethnic and specialty items — located a mile from the district’s office.

Griselda and Maria buy groceries from Food City because of its proximity. Typical meals for them include chicken with rice and vegetables, soup, quesadillas, beans and rice.

Between them, there are 10 children and three grandchildren. The sisters waited two hours at Saint Vincent de Paul for two food boxes so they could celebrate Thanksgiving with their family.

A Safeway, a Fry’s and a Basha’s all are located on the outskirts of the community more than five miles away, a trek that some people in the community can’t afford to take too often.

Other convenience stores and fast food restaurants are closer than any of those supermarkets — Fred’s Grocery, Rita’s Mexican Food, Jack in the Box and Whataburger, to name a few.

Through Mission of Mercy, volunteer Ingrid Sawyer teaches a class on chronic diseases to the Murphy school district community. Her class covers several topics from depression to eating healthy over a course of six weeks.

“Underserved communities don’t have the research or knowledge to apply healthy
practices for themselves let alone pass on those practices to their children,” Sawyer said.

One in four people in Arizona report being obese. According to a Morrison Institute Public Policy report, that 25 percent attributed income as a driving factor of their condition.

Obesity is a leading cause of Type II diabetes, which Smith says is a prevalent chronic illness he sees at the Murphy clinic.

Griselda started coming to the classes offered at the Murphy Education and Health Center because she wanted to learn.

Since the center has been opened, she’s taken classes that have taught her about youth drug usage, safety in the house and high blood pressure, which she has suffered from for years. She and her sister continue to join the “cafecitos” conversation every Wednesday.

They made appointments at the clinic for mammograms in December, as did nearly 50 other women in the community.

The two sisters, both in their 40s, have never had one.