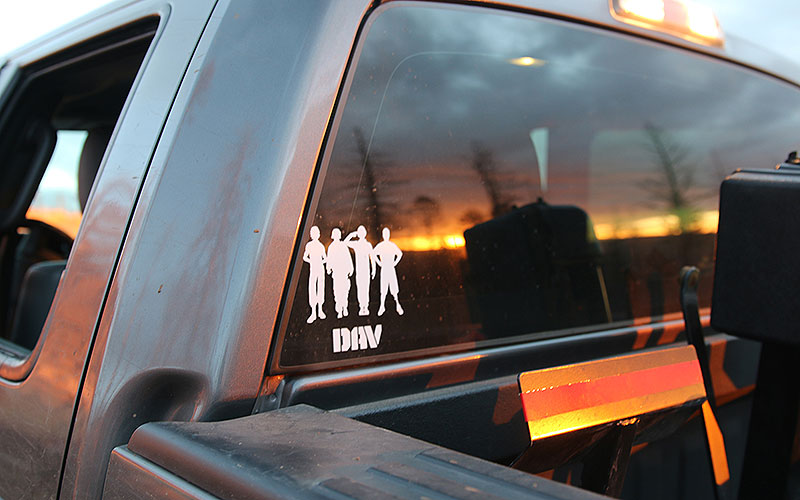 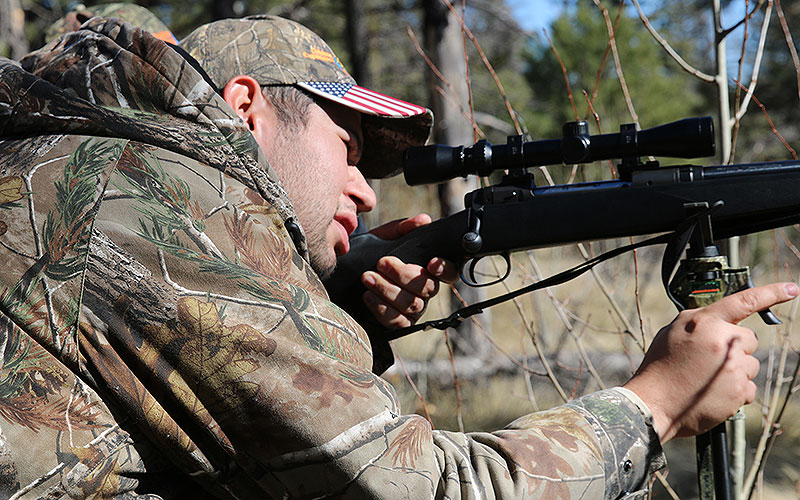 Jose Valdenegro lines up his shot in the woods near Springerville.
(Photo by Ty Scholes/Cronkite News) 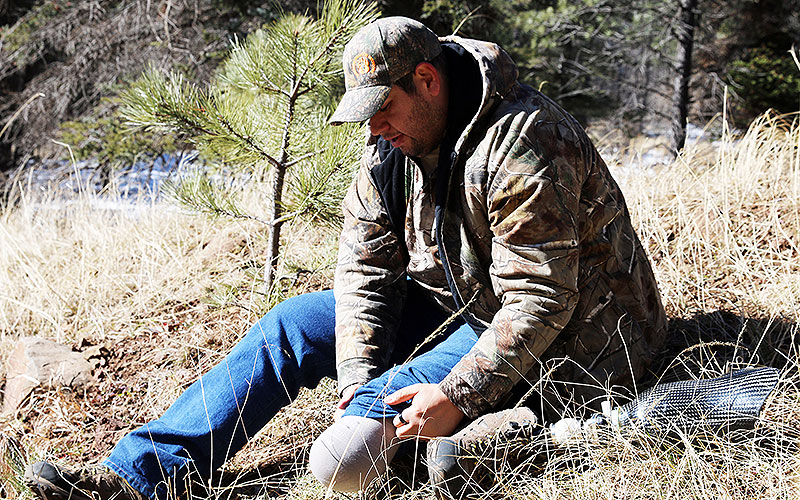 Not seeing any elk, they agree to check out a valley in the distance and take off in Valdenegro’s truck.

“Thanks,” said Valdenegro, “It was free,” he said with a smile.

Valdenegro is one of about 150 active duty disabled servicemen that Wounded Warrior Outdoors has taken out on an all-inclusive hunting expedition this year. The nonprofit has provided hundreds of servicemen and women with outdoor adventure therapy since its inception in 2010.

Eddy Corona is the WWO representative for Arizona, where he has organized outdoor trips for troops since 2014. He said he loves to see the look on a serviceman’s face when he tags his first elk. For him, it’s “like scoring a touchdown.”

“There are bigger challenges in the outdoors because you don’t have elevators, escalators, don’t have ramps. We have to make do of what we got out there and work together as a team,” said Corona.

Valdenegro was an avid hunter before joining the Army. His left leg was amputated after an IED exploded near his squadron while on tour in Iraq in 2009. He suffered a Traumatic Brain Injury and was diagnosed with Post Traumatic Stress Disorder in the following years. He is currently receiving physical therapy at the Brooke Army Medical Center in San Antonio, Texas.

“For me, for a long time, I didn’t want to be outside or around crowds,” he said. “So you know being out here outdoors, being away from everything, there’s no stress, no worries. You just worry about hiking, being out and meet some great guys.”

According to the Congressional Research Service’s 2015 casualty statistics, Valdenegro is one of more than 177,000 US Troops to be diagnosed with PTSD after serving in the Afghanistan and Iraq wars. The staggering number highlights the need for organizations like WWO, that foster healthy activities at zero-cost to vets, he said.

“Sometimes nature is the best medicine, and when you bring these guys out here and they see the scenery around them, it puts you in a calm place, where you’re like, ‘you know what, I’m alright,’ ” said Corona.

Dr. Esad Boskailo is a psychiatrist at Desert Vista Behavioral Health Hospital and an Associate Professor at the University of Arizona who focuses on trauma. A survivor of six concentration camps during the Bosnian Genocide in the early 90’s, Boskailo wrote “Wounded I Am More Awake” about his experiences.

He said battle-induced trauma “causes a loss of faith in humanity.”

“Traumatic events are known to freeze people in the moment of trauma. Getting somebody to experience life in the way they did before trauma is one of the biggest moments in recovery,” he said. “Together, a sense of safety, trust, and community are hugely beneficial to recovery. I can see how some people would benefit from outdoor therapy like this.”

More than 1,600 troops have suffered major limb amputations from battle injuries, according to the 2015 casualty statistics. Valdenegro said living with a prosthetic leg is a challenge at times, but the care that the US military provided him was the “best in the world.”

“Getting a prosthetic limb is really expensive for civilians, and it takes weeks,” he said. “But I was casted before I left and within a couple days I was fitted and on my way to walking again. Now I have a leg for running and a leg for hiking.”

For Valdenegro, the challenge of hunting elk in Arizona’s high-country is a welcome one. He grew up hunting, and after his amputation he did not know if he’d ever fill his freezer through his own efforts ever again.

At the end of the hunt, a light snow began to fall and twilight descended on the woods. Twenty minutes before the sun set, Moots spotted an elk bull on the side of a rocky peak. Valdenegro lined up the shot, pulled the trigger, and took down his first elk. The six-point bull will likely yield more than 250 pounds of meat.

The meat processing alone usually costs hundreds of dollars, but the cost will be covered by Wounded Warrior Outdoors. He will also get free taxidermy for his kill.

“Groups like Wounded Warrior Outdoors really do make a difference,” said Valdenegro with tears of gratitude in his eyes. “I’ve got a lot out of this, and I know a ton of other soldiers who could use something like this.”

Valdenegro is taking taxidermy classes and is seeking butcher training in game processing and hopes to perform similar services for veterans and their children in the years to come.