Arrnott Duncan, owner of Duncan Family Farms, talks with a worker on his farm. Duncan says food safety begins long before a vegetable is picked. (Photo by Lauren Michaels/Cronkite News) 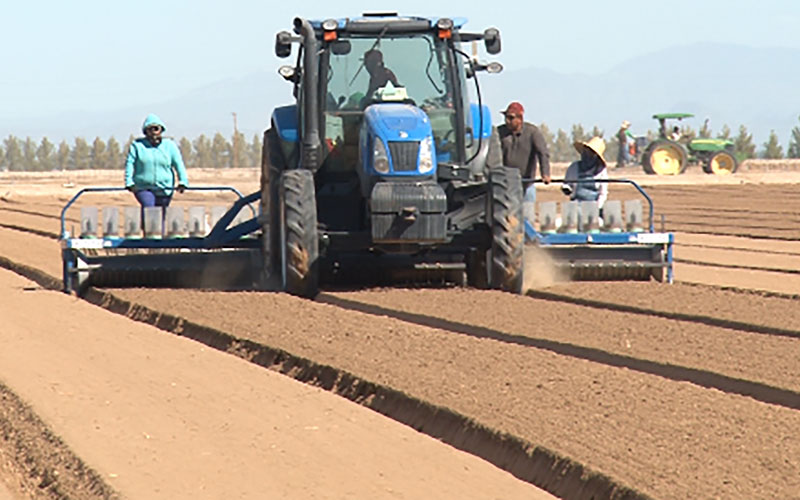 Food safety begins with the selection of seeds, fertilizer and soil, according to Arrnott Duncan, owner of Duncan Family Farms. (Photo by Lauren Michaels/Cronkite News)

The strain of E. coli came from celery used in Costco chicken salads and in other products sold in various store chains.

In Arizona, recalled products were sold at: Costco, Safeway, Albertsons, Walmart and Sam’s Club. The exact products and sell buy dates are found at fda.gov.

With this bacteria now in the state, one Valley farmer shared how he ensures food safety.

“All of the inputs that you’re putting into production of that crop: fertilizer, seed, any pesticides that you may utilize,” Duncan explains. “Testing those things to make sure they are free of pathogens.”

It’s a procedure that comes from “LGMA,” which stands for Leafy Greens Marketing Agreement.

With California and Arizona being the leafy green leaders in the country, that called for stricter food safety programs.

LGMA was established in 2007 by agriculture experts in California after a separate case of E. coli, which sickened more than 200 people. Arizona adopted LGMA less than a year after California.

LGMA is a voluntary, but a farm that commits to the program will be audited by USDA inspectors.

“Essentially it changed the culture of how we operate and how we farm on a daily basis,” Duncan says.

Another program with new rules to the state of Arizona is “FSMA,” Food Safety Modernization Act.

According to Ed Foster, the Assistant Director for Arizona Department of Agriculture, many states are worried about cost.

“The states have a strong issue with if FSMA is not funded,” Foster said. “They are unable to work with the FDA in order to implement these rules of FSMA.”

“There’s many different facets of these audits,” Foster said. “It pertains to water, soil, sanitation of workers, safety, the cleaning process, and sanitary of equipment.”

When shopping for your fruits and veggies, Duncan said try to learn where the produce comes from.

“I really don’t know that you could ever identify what could be safe and what isn’t,” said Duncan. “Because it’s totally up to the individual growers as to what type of food safety programs they utilize on their own farm.”