According to the study, 82 babies in Arizona died unexpectedly in sleep-related deaths in 2014, an increase from 74 deaths in 2013. (Photo by Jessi Schultz/Cronkite News) 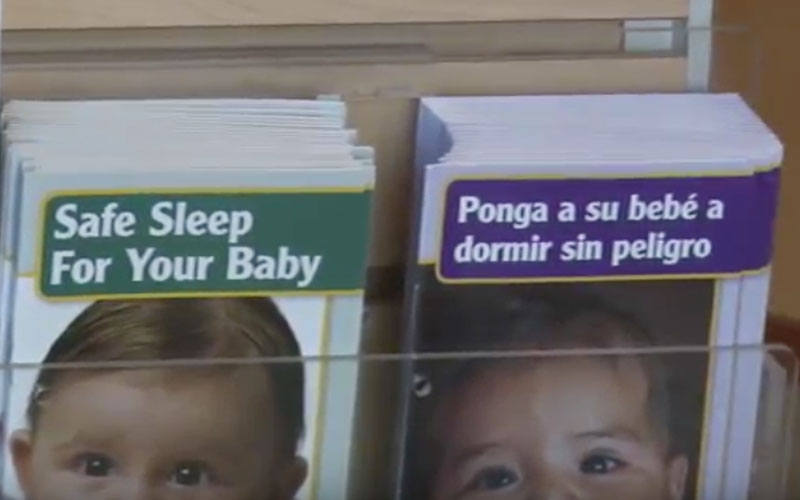 Healthcare providers are concentrating on getting the proper education out to the public through various sources. (Photo by Jessi Schultz/Cronkite News)

The deaths were caused by different factors including drowning, motor vehicle crashes and prematurity. However the Arizona Department of Health Services is focusing its efforts on preventing infant deaths caused by an unsafe sleep environment.

“We really want to push not having them in the same bed as you, and that is hard because as a society we want to keep our babies safe,” said Yomaira Diaz, the Injury Prevention Program Manager at the Arizona Department of Health Services. “We don’t ever envision that sleeping with our baby, is going to kill our baby.”

According to the study, 82 babies in the state died unexpectedly in sleep-related deaths in 2014, an increase from 74 deaths in 2013.

Diaz said co-sleeping is a top concern among healthcare providers because it is a common practice with many parents. Danielle O’Connell, a mom of three and Phoenix resident, co-slept with all of her kids.

“I didn’t think about it, I wasn’t like ‘should I co-sleep, should I not co-sleep?’ I was like ‘oh, my baby will sleep if she can sleep right next to me,’ ” said O’Connell.

Dr. Sara Bode, a general pediatrician at the Phoenix Children’s Hospital, noted that there are many reasons why parents end up co-sleeping.

“We have families that have a lot of people living together in one household. So now instead of having one bedroom for each kid, the entire family is sleeping in one room,” she said. “So what we have seen is an increase in families that are co-sleeping and having that baby in the bed with them because they don’t have an adequate sleeping place for the baby.”

O’Connell said she was never particularly nervous about co-sleeping.

“I never felt like I was in a deep sleep where I was just out of it. I always felt very connected to her,” she said.

Health officials also warn about having extra bedding in an infant’s bed, too many pillows, toys or bumpers. And letting the baby sleep on its stomach.

“It [SIDS] may not be as common as some other conditions, but there is no coming back from that,” said Bode. “The consequences of that would be devastating.”

Healthcare providers are concentrating on getting the proper education out to the public through various sources.

“Media, talking to families, talking about safe sleep practices, and finding out and asking questions, so we can get them that free crib or resource that they need,” Bode said.

O’Connell said more education is needed for young and inexperienced moms, like she once was.

“I didn’t really know any different. I know that once my kids got in their own bed I felt a relief,” she said.

The study found that 94% of sleep-related deaths were preventable.