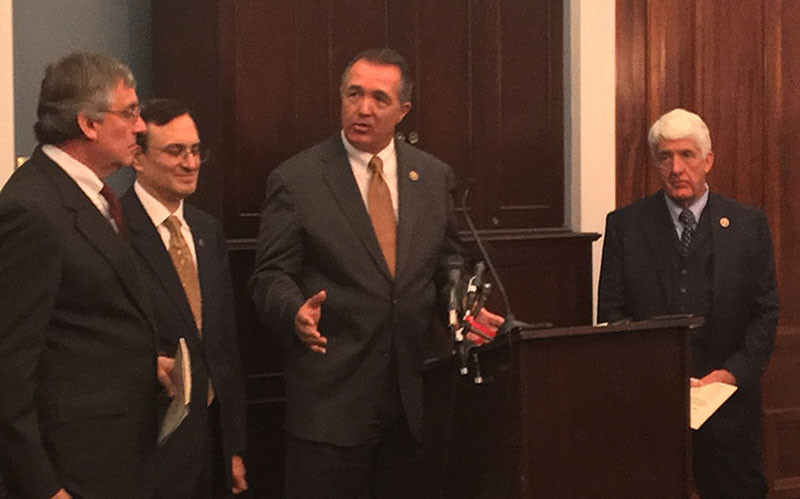 Rep. Trent Franks, R-Glendale, joined by other House Republicans to announce they had filed a legal brief in support of the latest challenge to Obamacare, which claims that the way the health care law was passed violated the Constitution. (Photo by Tom Blanton/Cronkite News)

WASHINGTON – Rep. Trent Franks, R-Glendale, led 45 other House Republicans Wednesday who filed a legal brief in support of the latest challenge to Obamacare, which the lawmakers claim is unconstitutional.

Their friend-of-the-court brief sides with Matt Sissel, an artist who has asked the Supreme Court to hear his challenge to the health care law on the grounds that it is actually a “revenue-raising” bill.

The Constitution requires that revenue bills start in the House, but Sissel and the lawmakers say Obamacare started in the Senate in violation of the Origination Clause.

A lower court disagreed last year, sparking Sissel’s appeal to the Supreme Court. The high court has not yet said whether it will hear the appeal.

Franks said in a prepared statement Wednesday that he and the other lawmakers on the brief were not surprised by the lower court’s decision. But he said they were disappointed by it.

“Our Founders desired that the taxing power reside in the chamber most accountable to the American people,” the House, Franks’ statement said. “Simply put, without the Origination Clause at its core, the Constitution as we know it today would not have come into being.”

Among the 45 who signed on to the brief were fellow Arizona Republican Reps. David Schweikert of Fountain Hills, Matt Salmon of Mesa and Paul Gosar of Prescott.

Another signer, Rep. Louie Gohmert, R-Texas, said in a statement Wednesday that the Obamacare legislation “unconstitutionally was first written and passed in the Senate, which the U.S. Supreme Court found included a huge tax on both individuals and businesses.”

“It is encouraging to see so many members of Congress step forward to participate in the filing of this amicus brief in the U.S. Supreme Court,” Gohmert said.

Sissel v. the Department of Health and Human Services is the latest in a string of challenges to the Affordable Care and Patient Protection Act – better known as Obamacare. Scores of House votes to overturn the law have stalled in the Senate, while the Justice Department reports at least 26 legal challenges, including two cases that reached the Supreme Court.

Franks and the other lawmakers said in the brief that Sissel’s case “raises an issue of exceptional importance – the separation of powers embodied in the Origination Clause – that merits review.”

A three-judge panel of the appeals court affirmed the lower court’s ruling last year, saying that because the primary purpose of the health care act was not to “raise revenues,” it was not subject to Origination Clause restrictions.

That appeals court opinion pointed to a Supreme Court ruling from 1897 that said “revenue bills are those that levy taxes in the strict sense of the word, and are not bills for other purposes which may incidentally create revenue.”

Franks and the others disagreed with that reasoning. Their brief says “the history of the Origination Clause, its purpose, and a proper reading of the relevant Supreme Court decisions, early federal court opinions, and State court decisions that interpreted their respective State Constitution Origination Clauses, all demonstrate that the court below fundamentally erred in devising the novel ‘primary purpose’ test.”

Franks, in prepared remarks, called it “undeniable and undisputed” that Obamacare “imposes hundreds of billions in revenues and taxes … and 16 other revenue-raising provisions.”

Requests for comment from the White House were not immediately returned, and the Health and Human Services Department referred inquiries to the Justice Department.