Deaths measured in the Trust for America’s Health report included all types of drug-related deaths, including accidents and violence. Arizona officials say their numbers, which measure only overdoses, are more accurate – and lower. (Photo by Philippa Willits via flickr/Creative Commons) 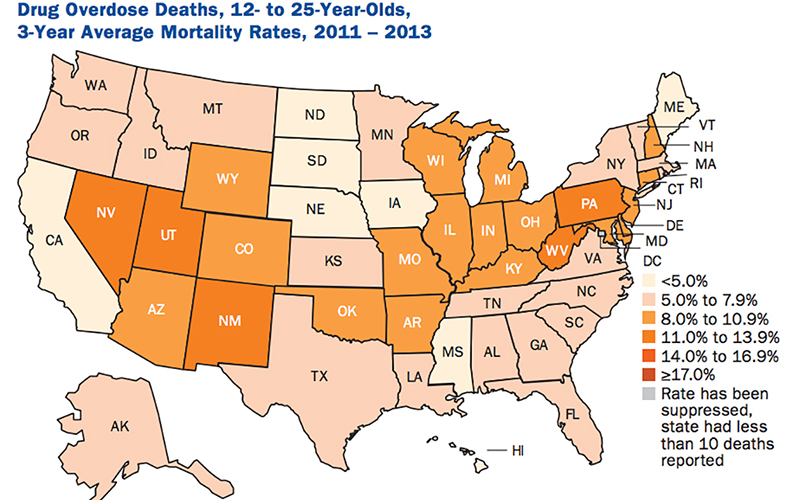 Arizona’s drug overdose rate of 10.2 deaths per 100,000 young people in the state for the years 2011-2013 tied for eighth-highest rate in the nation, acccording to a new national report card. Arizona’s rate was up sharply from 10 years earlier. (Map courtesy the Trust for America’s Health)

WASHINGTON – Arizona had among the highest rates of teen and young adult overdose deaths, and ranked poorly for programs and policies to curb drug use and encourage healthy living among those age groups, a new report says.

The state-by-state report by the Trust for America’s Health said Arizona averaged 10.2 overdose deaths per 100,000 teens and young adults from 2011 to 2013, tied for eighth-highest among states. That was more than double the rate of 4 deaths per 100,000 young people in the state between 1999 and 2001, according to the report released Thursday.

But Arizona health officials challenged the report’s findings, saying their own statistics show a much lower death rate. They believe their numbers are more accurate since they count only deaths specifically resulting from drug overdoses, while the report counted all drug-related causes, including accidents and violence.

West Virginia fared worst in the report, “Reducing Teen Substance Misuse: What Really Works,” with a drug-related death rate of 12.6 per 100,000 young people. That was more than five times the rate of 2.2 deaths per 100,000 in North Dakota, which posted the lowest rate among states and the District of Columbia.

“Overdose rates are different all over the country,” said Richard Hamburg, deputy director of Trust for America’s Health. “But the pockets we’ve seen that are particularly high are in a number of Western states.”

Arizona tied Colorado and Delaware for the eighth-highest youth overdose rate, while three other Western states – New Mexico, Utah and Nevada – were in the top five. The report drew on numbers from the Centers for Disease Control and Prevention.

Hamburg said the real threat to teens and young adults in many communities is a lack of help and policies or programs that can nip the problem in the bud.

“If we invested more in ensuring supportive environments, counseling, and other preventive measures, we could address the problem of substance abuse before it happens,” he said Thursday. “States need to address the root causes.”

The report cited 10 “policies and programs that can improve the well-being of children and youth” and are “connected with preventing and reducing” substance misuse. States got one point for each of those policies they had in place.

Arizona was one of 11 states to get four points. Three was the lowest score, shared by four states.

Arizona was credited for having smoke-free laws, for increasing mental health services funding in fiscal 2015, for having penalties for selling alcohol to minors and for providing Medicaid coverage for three medications to treat painkiller addiction.

The state lost for not having comprehensive anti-bullying laws, for a high school graduation rate below 80 percent, for failing to provide protection for people who seek help for an overdose and for not having a specific treatment-referral program.

Arizona also lost points for its lower-than-average treatment rates for teens with depressive episodes and for maintaining “one-size-fits-all” sentences for nonviolent drug offenses.

Hamburg said the decision to rate states on solutions, and not just problems, was part of “a real effort to put the focus on prevention.”

But St. Mars said there are other indicators of progress than those highlighted in the report.

“Arizona has worked really hard over the past couple of years,” she said. “What we’ve seen is that our teen (drug) use numbers have actually gone down.”

In September, the CDC gave Arizona a $3.6 million grant to combat prescription drug addictions, which will be dispersed over four years and managed by the Department of Health Services.

“We want to promote responsible prescribing of drugs, and enhance substance referral to treatment,” St. Mars said. “We know the best work happens at the lower level.”

She said the department has already used some of the grant money to partner with six counties in an effort to more effectively oversee the health and safety of Arizonans.

But Hamburg said there is still room for improvement among most states, noting that “only about 1 in 10 youth who need treatment are getting it.”