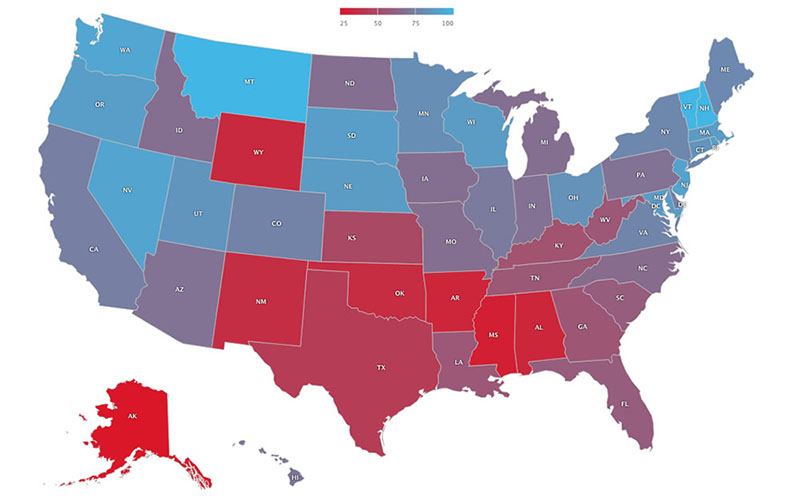 Arizona was one of 18 juriscictions to get a B on a new national report card on palliative care, which aims to treat pain and symptoms of long-term ailments. States in red above had the lowest rates, blue were highest. (Map courtesy National Palliative Care Research Center and Center to Advance Palliative Care)

WASHINGTON – One in three Arizona hospitals did not offer palliative care in 2013, but that was still good enough to earn the state a B on a national report card on the relatively new specialty practice.

Palliative care offers “specialized medical care to patients with serious illnesses,” focusing on pain, stress and symptom relief, said Sean Morrison, one of the authors of the “2015 State-By-State Report Card on Access to Palliative Care in Our Nation’s Hospitals.”

It said 68.4 percent of Arizona’s hospitals offered the care in 2013, slightly better than the national average of 66.5 percent. But Morrison sees room for improvement.

“That means there’s still a substantial number of hospitals in Arizona that don’t” offer the care, said Morrison, director of the National Palliative Care Research Center, which published the study with the Center to Advance Palliative Care.

But advocates in Arizona said the state is actually doing relatively well, noting that it can be hard for hospitals, particularly smaller hospitals, to come up with funding for the relatively new practice.

“It’s the new frontier,” said Gobi Paramanandam, director of Arizona Palliative Home Care. “But I think we in Arizona may be further ahead” than other states.

Paramanandam said “it isn’t always easy” for hospitals to come up with the funds to start palliative care units. And start-up funding is not the only financial challenge for the specialty, said an Arizona Hospital and Healthcare Association official.

“It’s not a revenue generator for hospitals,” said Sandy Severson, vice president of care improvement for the hospital association.

Severson said that’s why many hospitals contract out the work. “It’s really a cost avoidance,” she said.

But she said the association supports delivery of palliative care at Arizona’s hospitals, noting that for hospital leaders “it should be a moral imperative to support living and dying well.”

The service “has exploded in the past couple of years in Arizona,” said Rachel Brueckner, assistant to the clinical services director of Arizona Palliative Home Care.

“If you have an aging population like we do here in Phoenix, it’s important to have palliative care available,” Brueckner said. “It’s a small change for huge impact.”

While the report said palliative medicine is being offered at an increasing number of hospitals across the country, that increase is not coming fast enough for Morrison.

Using 2013 data from the American Hospital Association, the report found that only 29 percent of U.S. hospitals with fewer than 50 beds offered palliative care that year compared to 67 percent for hospitals with 50 or more beds.

“Typically, you’re much more likely to have a palliative care team at a larger hospital,” he said. “Any hospitals with more than 50 beds should offer palliative care.”

The report graded states based on the percentage of hospitals that had palliative units.

The 17 states that earned an A had the service offered at 80 percent or more of their hospitals in 2013. Arizona was one of 17 states and the District of Columbia that got a B for having the service at 61 to 80 percent of medical centers. Nine states got a C and seven got a D.

New Hampshire, Vermont and Montana were tops, offering care at all of their hospitals, according to the report. Alaska was last, with the service offered at just 25 percent of its facilities.

The report included information on 38 hospitals in Arizona – 31 nonprofit, five for-profit and two public operations – of which 26 offered palliative care, for a rate of 68.4 percent.

Morrison said more medical facilities in Arizona, and the nation, should be offering the care.

“The fact that only two-thirds of American hospitals have palliative care units means we still have some room to improve,” he said. “Just like every hospital in the country has emergency care and intensive care, they should also have palliative care.”