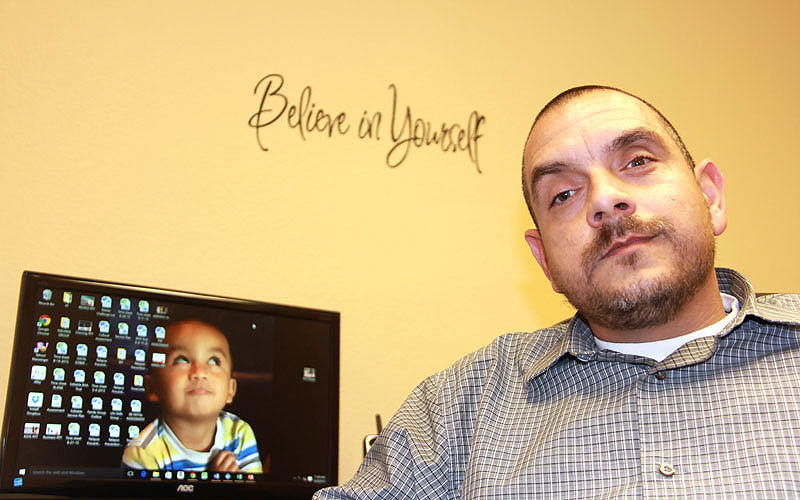 Rick Reyes, shown in his office, is the lead behavioral health technician at Recovery Oasis in Tempe. (Photo by Claire Cleveland/Cronkite News)

“I was very surprised. I thought it would be densely populated with prescribers and treatment agencies providing comprehensive treatment centers for patients – or at least outpatient treatment centers,” Mullin said.

A recent study cited by The Pew Charitable Trusts suggests that what Mullin heard was correct. It found that Arizona has 20 behavioral health professionals per 1,000 adults addicted to drugs or alcohol, the fifth-lowest rate in the country.

The national average in the Provider Availability Index, developed by the health care consulting firm Advocates for Human Potential Inc., found the national average to be 32 behavioral health professionals per 1,000 addicted adults.

Jeff Zornitsky, the firm’s director of strategic initiatives, said the problem is caused by a combination of factors including low reimbursement rates from Medicaid and Medicare, which makes the cost of operating a treatment center unaffordable.

He said people who work in substance use disorder treatment earn less on average than others in health care, which makes going into the field less financially appealing and also results in fewer treatment centers in rural areas.

“What it says is that several elements of the infrastructure required to serve people is not as strong in Arizona as it is in other states,” Zornitsky, said.

Mullin said Recovery Oasis treats those receiving Medicaid and Medicare but limits the number because reimbursement rates are too low compared to private insurance for the center to be profitable.

“Unfortunately, I think a lot of people don’t get involved because they don’t think it’s going to be as lucrative as they hoped,” he said.

Rick Reyes, lead behavioral health technician at Recovery Oasis, said many treatment centers take more people than they should and fail to cap the number of patients per provider to increase revenue.

“We’re talking about one counselor that might have over 100 clients on their caseload that they are responsible for,” he said. “So why create more programs when you don’t have an identified cap and you can bring in more people? I don’t care if you’re like the greatest counselor or therapist in the world, you’re not gonna change, or assist with the process of change, in 15 minutes.”

Joyce Morgan, chief of clinical services of The Haven, a Tucson drug treatment center serving women, said state criteria for Medicaid patient placement, length of stay and transfer/discharge make reimbursement less than what the facility needs to treat a patient.

“The way that the funding streams off in AZ can sometimes be prohibitive to allowing women to get treatment,” Morgan said.

Cara Christ, director of the Arizona Department of Health Services, said the state is trying to encourage more people to enter the field through loan repayment programs.

“Which is a huge incentive if you are a health care provider, because there is a lot of schooling that is required whether you are a behavioral health provider, a physician or a nurse,” she said.

“It takes so long to become a psychologist or psychiatrist,” he said. “That’s years out, and we have this big problem today.”