Phoenix Fire Department Capt. David Sanchez, right, and Capt. Scott Petersen practice needle decompression on a mannequin in the Center for Simulation and Innovation lab at the University of Arizona College of Medicine- Phoenix. (Photo by Lindsey Nelson/Cronkite News) 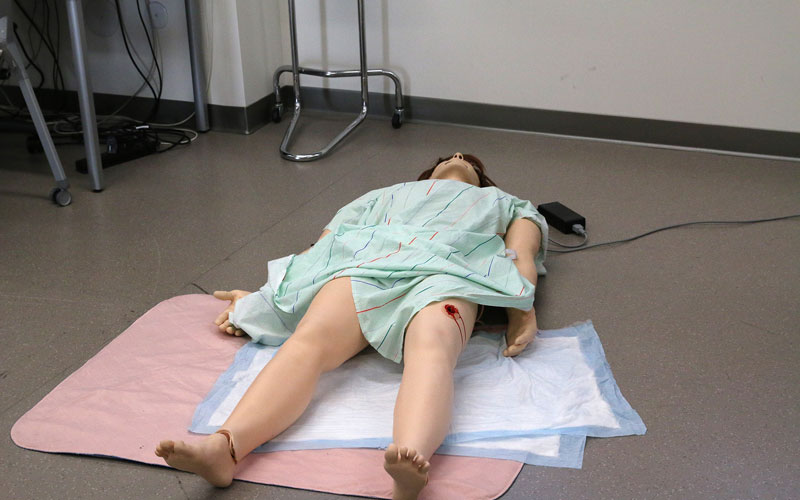 A high-tech mannequin at the Center for Simulation and Innovation at the University of Arizona College of Medicine-Phoenix allowed firefighters to practice treating a gunshot wound. (Photo by Lindsey Nelson/Cronkite News)

The patient’s eyes are wide, his face seemingly contorted in fear, but he remains motionless and silent as Phillips manages to stop the flow of blood.

Phillips then turns to fire Capt. Albert Abril: “Hey, man. Do you think this is tight enough?”

In this case, there’s time for feedback and room for error. The patient is a high-tech mannequin in the Center for Simulation and Innovation at the University of Arizona College of Medicine-Phoenix.

Phillips was part of a group of firefighters receiving paramedic training recently through the lab, practicing on mannequins that simulate gunshot and knife wounds, collapsed lungs and more.

In light of recent violent events nationally, the Phoenix Fire Department wants each of its 1,600 firefighters to go through a mass violence simulation, said Austin Moreland, a firefighter/paramedic who helped lead the session.

“It’s definitely a sign of the times that it’s becoming to where everyone needs to be prepared to be able to manage and be able to mitigate an incident like this at any time,” he said.

They’ll do that using simulation mannequins created to offer a realistic experience with medical emergencies.

“Our management came up with the decision that we want to implement the tactical emergency casualty care guidelines that are now national guidelines that talk about how to deal with mass casualty incidents and shooter incidents,” said Joel Stevenson a firefighter/paramedic who also led the simulation training.

Another mannequin showed symptoms of a tension pneumothorax, or collapsed lung, so Capts. David Sanchez and Scott Petersen located the correct point on the mannequin’s chest and inserted the needle. Once the chest was successful decompressed, the firefighters pumped it full of air again to give someone else a try.

Stevenson said the Phoenix Fire Department has a nine-month-long paramedic program that focuses on simulation. Once their initial training is over, firefighters will go through a yearly refresher.

“It’s very important for paramedics to practice their skills as much as possible,” he said.

While every firefighter will receive simulation training, not all will use the Center for Simulation and Innovation. However, Phoenix Fire Department officials say they hope to use the lab again.

“The simulation lends that ability to run through some actual incidents,” Stevenson said. “That allows us, for when we go out on those calls, for it not to be the first time that I’ve packed a wound and really know how to do it practically.”