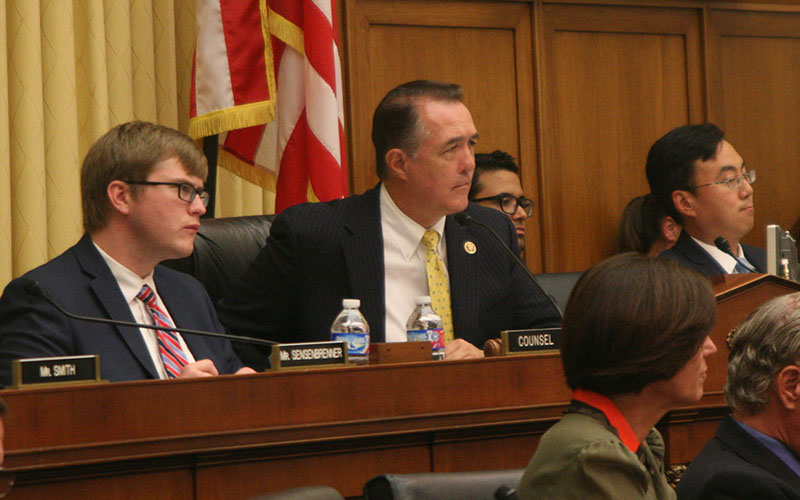 Rep. Trent Franks, R-Glendale, center, at a House Judiciary Committee hearing into Planned Parenthood, talked about what he called the “gut-wrenching atrocities” of abortion. (Photo by Tom Blanton)

His comments came during a tense four-hour House Judiciary Committee hearing sparked by a series of undercover videos that claim to show Planned Parenthood officials discussing sales of fetal body parts for profit.

Those videos, by the Center for Medical Progress, have been attacked by pro-choice groups who say they were doctored after failed attempts to entrap Planned Parenthood officials. But the hidden-camera footage has led to renewed calls by pro-life groups to cut federal funding for Planned Parenthood.

The title of Wednesday’s hearing – “Planned Parenthood Exposed: Examining the Horrific Abortion Practices at the Nation’s Largest Abortion Provider” – left little doubt which way the majority of the committee was leaning.

“Many members of Congress have not uttered one single syllable against these gut-wrenching atrocities,” Franks said, citing the videos in his opening statement. “What is so liberating about brutally and painfully dismembering living, helpless, little human babies?”

Critics noted that no officials from either Planned Parenthood or the Center for Medical Progress were invited to testify at the hearing. Witnesses included a National Right to Life official, two women who said they were survivors of attempted abortions and a law professor who studies reproductive rights and privacy.

“Surely, the Congress has better things to do than spend its time helping to undermine an organization that provides vital health services,” Rep. John Conyers, D-Michigan, said in defense of Planned Parenthood.

While lawmakers on both sides were impassioned in their questioning, the packed audience sat quietly through the hearing, many in pink T-shirts with the Planned Parenthood logo on the front.

Planned Parenthood said it received $528.4 million in government grants and reimbursements in fiscal 2014. With private support and other funding, the organization had a $1.3 billion budget that year that it said it used to provide contraception, tests for sexually transmitted diseases, vaccines, mammograms and abortions in its more than 700 clinics across the country, serving 2.7 million patients.

Franks and others at the hearing said the videos show Planned Parenthood employees offering to sell fetal tissue from aborted fetuses for profit, which is against federal law, and talking about violations of the Partial Birth Abortion Act. He and Rep. Bob Goodlatte, R-Virginia and chairman of the committee, have asked the Justice Department to investigate the allegations.

But Priscilla Smith, director of Yale Law School’s Program for the Study of Reproductive Justice, attacked the videos, which she called part of a “campaign against Planned Parenthood.”

“It is my opinion based on a review of the federal laws at issue and these videos, that there is simply no evidence in these misleadingly edited videos of a violation of either of these laws,” she said in her prepared testimony.

Smith, who said she was testifying for herself and not for the law school, said that none of Planned Parenthood’s federal funds were used for abortion services, except in cases of rape, incest or when the life of the mother is endangered. Defunding the agency would have a “disastrous impact” on health services that could actually lead to more abortions, she said in her statement.

“Let’s just redirect those funds (from Planned Parenthood) and put them towards clinics that really actually care about women’s health,” said Kupec, who was in Washington for Wednesday’s hearing.

“Americans should not be forced to be complicit in the barbaric practices that Planned Parenthood has clearly engaged in,” Kupec said.

But Laguens said there is no substance to the charges, saying that pro-life lawmakers at the hearing “definitely made up with fervor and fabrication what they didn’t have in fact.”